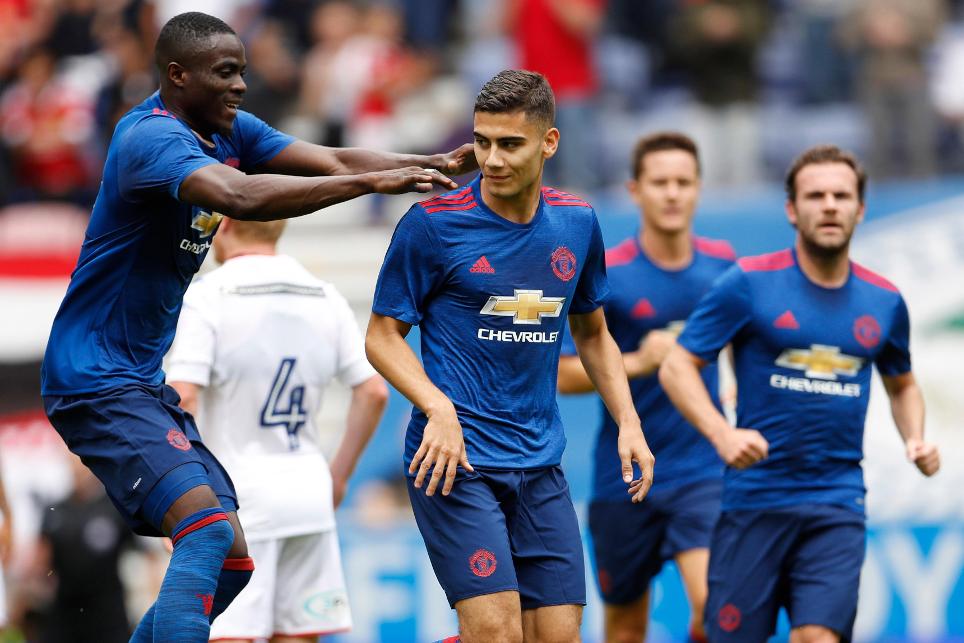 A host of Premier League clubs were in friendly action this weekend as they stepped up their preparations for the new season, which begins on 13 August.

New Manchester United signings Eric Bailly and Henrikh Mkhitaryan made their debuts as manager Jose Mourinho celebrated victory in his first match in charge of the club, against Wigan at the DW Stadium.

United took the lead on 49 minutes, Juan Mata pouncing on a mistake by goalkeeper Jussi Jaaskelainen to set up Will Keane for a simple finish, and their advantage was doubled nine minutes later when Andreas Pereira fired into the top corner.

"I am very happy," Mourinho told manutd.com. "The result is obviously not the most important thing, but it is always important. I’m happy because there were things we tried in training around some principles of our play defensively and offensively and I could see them."

Antonio Conte's first match in charge of Chelsea ended in defeat as an experienced side featuring the likes of John Terry, Asmir Begovic, Nemanja Matic and Diego Costa lost at the Allianz Stadion.

Joelinton and Tomi were the goalscorers for Rapid Vienna, while Costa and Ola Aina came close for Chelsea.

"This is the first game for us but I knew it would be very difficult after three days of double training," Conte told chelseafc.com. "They were very hard sessions, not to enjoy, all about the physical and tactical aspect. I think it was a bit normal to meet these difficulties in the game, but I don’t like to lose and it's the same for my players."

Crystal Palace manager Alan Pardew was full of praise for his side after they claimed victory in front of 35,061 fans at the Nippert Stadium – a record crowd for a football match in Ohio.

The Eagles took the lead on nine minutes through a 25-yard strike from Jordon Mutch before Wilfried Zaha sealed the victory with a shot into the bottom corner with 27 minutes to go.

"We had some great attacking play tonight," Pardew told cpfc.co.uk. "It was exciting and there were some nice moments for the crowd to enjoy of top quality. There aren’t many Premier League teams who can carry those exciting players that can get past people and we’re lucky to have the wide players that we have here."

Baggies striker Saido Berahino scored both goals to help his side record victory in their first pre-friendly since returning from a training camp in Austria.

Berahino scored a goal in either half for Tony Pulis' side while new signing Matty Phillips twice came close to scoring his first goal for the club.

Francesco Guidolin said he was not concerned by the result as his Swansea City side suffered defeat on a stormy night in Virginia.

The Swans were behind to a Jordi Amat own goal before play was halted just before half-time for 95 minutes because of lightning and heavy rain. Swansea completely changed their line-up for the restart and they went two behind through an Anthony Grant goal on 74 minutes.

"It was a difficult test because we played against a good team who were very, very quick," Guidolin told swanseacity.net. "We were a little bit tired in this period, but that's normal.

"It was a good test for us because it is important at this stage to get used to the rhythm of games again. I am not worried about the results. I know at this time in pre-season we can have performances which are up and down. This is normal."

Jack Butland, Glen Johnson and Marc Wilson made returns after injury lay-offs as Stoke City opened their pre-season campaign with defeat at the Pirelli Stadium.

The trio played for 45 minutes as manager Mark Hughes gave 20 players a run out in a match that was settled with goals from Chris O'Gray (twice) and Lucas Akins.

"We wanted to get Jack back for the first day of pre-season and we've done that," Hughes told stokecityfc.com. "He's been back in training for three to four weeks and he looks as good as new.

"It was pleasing to see Greg and Marc out there as well. Losing guys like that last season was a big blow to us but they are fit and well and looking forward to the new season."

An own goal from Andy Butler and a late strike from Alex Pattison gave Middlesbrough victory in their second friendly of the summer.

"We had a good week here and wanted to finish it off with some good habits being reformed," manager Sean Dyche told burnleyfootballclub.com. "There was a good feel about how we performed, we had some good habits and came through it unscathed, so it ticked all the boxes.

"It's only a small step this one, and there are bigger ones to come, but the essential thing is getting players ready for the season."

Hull City started their 2016/17 pre-season on Friday with a goalless draw at Grimsby Town.

Robert Snodgrass, Mohamed Diame and Greg Oley were the players to go closest to scoring for Hull, who were dealt an early blow when Moses Odubajo, the full-back, had to go off after five minutes after an awkward fall.