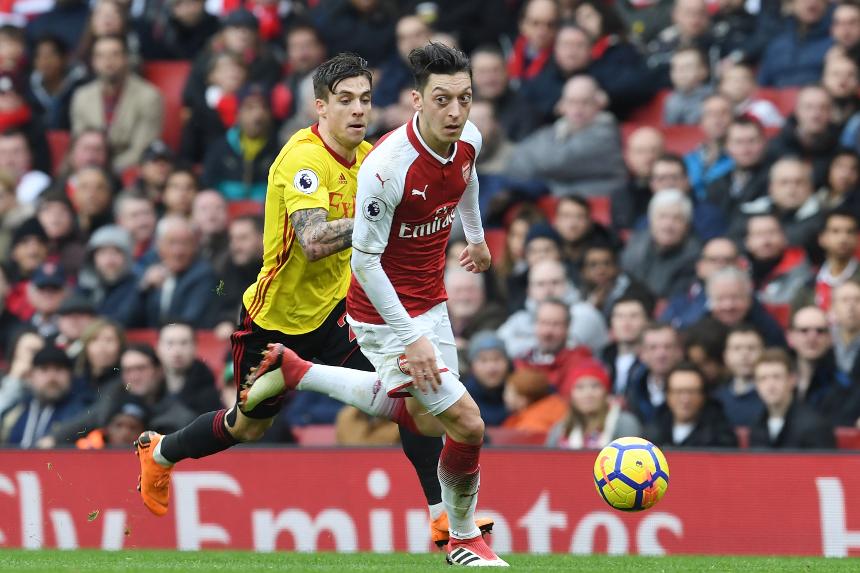 What's the latest on Ozil, Mustafi and Bellerin? External Link

Mesut Ozil played himself into the Premier League record books when he set up Arsenal’s opening goal in Sunday’s 3-0 victory over Watford. But the German may not hold the record for long.

The 29-year-old had gone four matches without an assist but claimed his 50th in 141 PL matches as his eighth-minute free-kick was headed in by Shkodran Mustafi.

In doing so, Ozil became the fastest player to reach the half-century, narrowly beating Eric Cantona, who reached that mark in two matches more.

The Manchester United legend held the record for more than 21 years, having reached his 50 against Coventry City in January 1997.

However, Ozil may not be in pole position for long.

The Manchester City midfielder is this season’s leading assist provider, with 14.

If he maintains his present rate, De Bruyne is on course to reach his 50 in another 17 matches, before the end of 2018.

If so, he would break Ozil's record for reaching the half-century in about 30 fewer matches.

For now, though, the German leads the way, and appears to be happy to assist the club off the pitch too, as a light-hearted Arsenal video shows.

Be it on the pitch or at the training ground, @MesutOzil1088 just loves to assist
🤣 pic.twitter.com/Ua649ktbSX