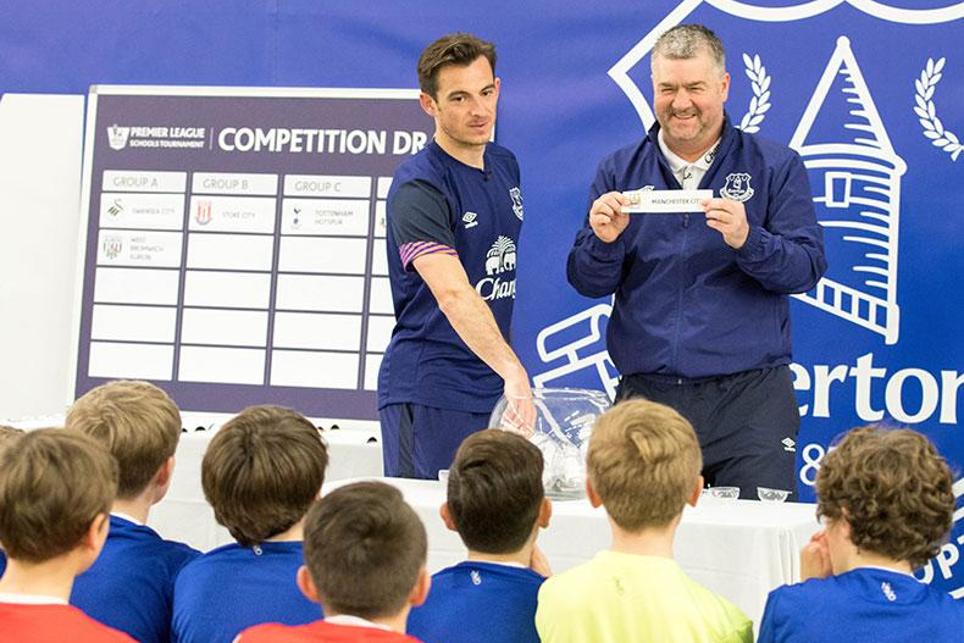 The build-up for this year's Premier League Schools Tournament has begun, with the 20 top-flight clubs discovering who will represent them at Everton's Goodison Park in May.

Leighton Baines, the Everton left-back, and club legend Ian Snodin made the draw for the finals on 17 May, which features 20 Under-11 mixed and 20 Under-13 girls' teams.

The teams who will compete at Goodison will have the full Premier League experience, playing in their club's kit, visiting the dressing rooms while top-flight referees will take charge of the matches.

As well as conducting the draw, Baines chatted to Everton's Under-11s representative.

"Best of luck for the tournament," Baines told the Childwall CE Primary School team, who will aim for triumph on home soil. "The most important thing is to enjoy it and to also play in the right way and conduct yourselves in the right way.

"It's very important for the club to support young people of all ages in football," Routledge told swansacademy.co.uk. "It starts from the bottom and the more you learn when you’re younger, the better you become when you're older so it’s very important."

The draw has thrown up intriguing groups, with Group A having a heavy Midlands element of Aston Villa, West Bromwich Albion and Leicester City, while in Group B three London sides feature: Tottenham Hotspur, Arsenal and Chelsea.

The Everton team will also be hoping they can continue Merseyside's impressive record in the competition of late, with Liverpool's representatives winning three of the last five Under-11 trophies.

Liverpool are the current holders of the Under-11 trophy and Arsenal the Under-13s, with Plantation Primary and Stoke Newington claiming victory at Tottenham Hotspur's White Hart Lane stadium last May.