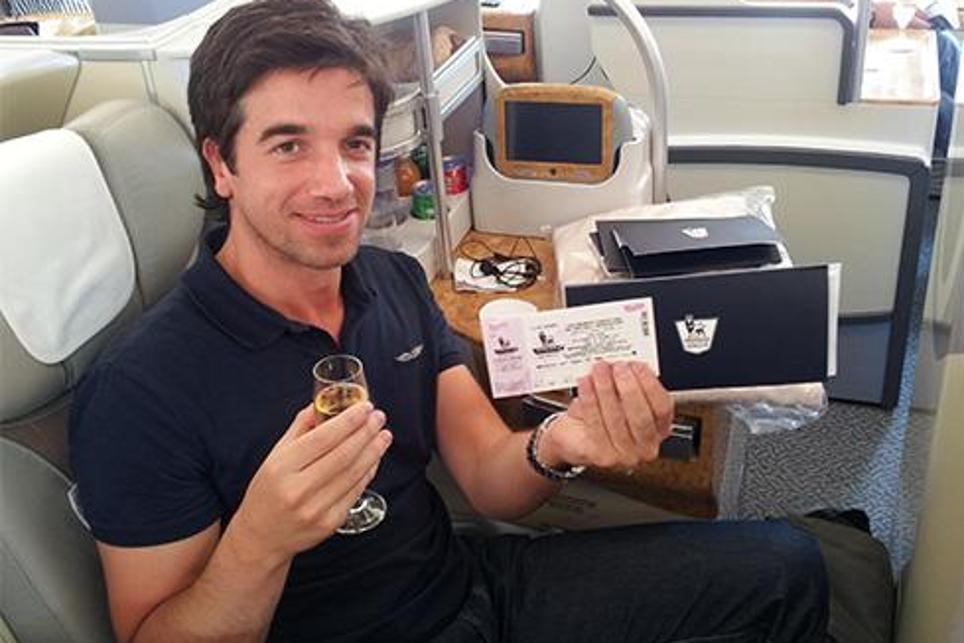 To mark the launch of the world's biggest fantasy football game Fantasy Premier League 2013/14, in association with EA SPORTS, we caught up with last year’s champion Matt Martyniak.

Matt has competed in the game since the 2006/07 season and until last season his best finish had been 707th in 2007/08. That all changed when he won the title in dramatic fashion in May. He was two points behind the leader Kelvin Travers once points from the final 90 minutes of the season had been added, but with the bonus points still to be confirmed.

And they were to prove decisive as Matt’s only Gameweek 38 signing, Liverpool’s Philippe Coutinho, and left-back Jose Enrique, combined to earn his side Divine Mercy a further five points which took him above Travers.

The prize for becoming the FPL champion was a VIP trip to a Barclays Premier League match of his choice with two nights' accommodation included as well as £250 spending money. Martyniak also won a trip for five nights to Hong Kong to watch the Barclays Asia Trophy last week.

For Martyniak, the excitement of the final Gameweek took place in a serene location as he made a pilgrimage to Medjugorje, in Bosnia and Herzegovina. The trip presented him with some extra concerns ahead of the deadline for teams to be submitted.

"I had my flight to a pilgrimage to Bosnia booked around Christmas when I had broken into the top 20 and then I realised it coincided with the final gameweek," he says. "I had a feeling back then that it would be a significant week.

"I was not sure whether I would have internet access at the little village I was staying. So I picked my team on the Wednesday, took the flight with the hope of getting a connection and, thankfully, there was. So Saturday night I tweaked my team. I had my team set up on Wednesday but one or two days is a long time in the Fantasy Premier League.

"I woke up on Sunday morning, checked again that all my team were fit and that was all I needed to know. I was happy with my team. Then it was a question of whether I make a change or not."

Here is where Martyniak made the crucial decision that won him the title.

"I had one free transfer, so I took out [Marouane] Fellaini, who had a tough match for Everton away to Chelsea, and swapped him for Coutinho, for Liverpool, who were at home to QPR," he says. "I know people were buying Liverpool's Daniel Sturridge but I had three good strikers so I thought if I could cover Sturridge with Coutinho I'd be all right.  And he scored and got me 10 points."

Learning about winning the title was not so straightforward, and it was only several hours after the matches had finished that Martyniak knew for sure that he was champion, which has brought him fame within the FPL community as well as making him realise how popular the game is.

"I only found out towards the end of the matches, when I logged on to a forum where there was a thread set up in April to follow my progress and cheer me on," he says. "I checked on that forum but there was too much information. So I logged on later and I saw it went down to bonus points and I was in the running. But I had to go to church and after that I checked again and found out I was top. I saw my name there and my colleague told me but I still had no confirmation. It was only when I checked again at about 11.30pm and it was official.

"It felt amazing. Everybody who knows me knows I love Fantasy Premier League. I have been playing it since it first came out. I used to do quite well then, winning my work's league and nationally. To win my favourite competition overall is amazing, what with 2.6m other players.

"I knew it was big and good and only since I have won it have I realised how big it is. All the people who have sent me messages via phone, Twitter or Facebook, since I have won. There are loads of people whom I knew, but I was never aware that they were playing it."

As to the secrets of his success, Martyniak does not have a secret formula, more a mantra that most successful managers throughout football have followed: Keep it simple.

"You have to play the game to how it is set up," he says. "The way Fantasy Premier League has been set up favours the attacking players, the forwards and midfielders. So while people were spending money on big defenders and big goalkeepers, I knew it was not the way to go.

"So I invested heavily on a front seven. They are more likely to get the goals and assists but it is not just those points, it is the bonus points, too.

"You have to look at which players are going to attract bonus points, those who shoot on target more, dribble more. Such as Jose Enrique, the Liverpool left back, who likes to dribble."

Keep faith with your players

Another policy is not to focus purely on points from goals and assists but also on whether your players will pick up the staple points for playing in the match. Also managers should avoid gambling on players who do not earn points on a regular basis and not to panic, instead keeping faith with the players who deliver points on a regular basis, even if they go through a bad patch.

"I also kept my choice of captain simple, mainly Van Persie or Bale, players who were consistently good, rather than gambling on someone who may perform that Gameweek alone – the one-hit wonders."

As for transfers, Martyniak believes a conservative approach is best, avoiding the loss of points to bring in extra players.

"I hardly went beyond my free weekly transfer," he says. "I only took four hits all season, paying for an extra transfer.

"I would advise against too many transfer hits because they often do not work out. Some people keep switching their players around too much. Lots of my rivals got rid of Van Persie towards the end but I stayed faithful to him and to Bale and they repaid me. Bale got me vital points as my captain with his last-minute strike against Sunderland on the final Gameweek."

The forthcoming season will have slightly different rules in place for bonus points (see here) but it is not enough to force a change of plan from Martyniak, who will continue with the policy that has brought him success.

"I will try to keep the same philosophy in place about my formation," he says. "I played that formation many years ago when I finished in the top 5,000 and I stuck with it and climbed to the top 700.

"But then I started to play big defenders and goalkeepers and I was rubbish. So I returned to the tactics and I won with them. So I will stick with them, even though the rules have changed. You might get a few cheap defensive midfielders or defenders who score more points this season, but I will continue as I did."

The new season is barely two weeks old but already a team to defend Martyniak's title is in place although there is still time for changes to be made.

"I picked a team as soon as the game started," he says. "I will adjust it, but not get carried away and change it every day like some are doing!

"I will look at players who are transferred because sometimes there are players whom I would not pick if they played for one team, but if they move to another team in the Barclays Premier League team they could do really well and be worth selection.

"I have already started planning the fixtures and where teams might have a double Gameweek and where extra points can be gained. It's a dynamic game. Things can happen every day with transfers and injuries so even up to the morning of the final Gameweek I will be checking the teams and finalising the players."

Martyniak does play other fantasy games but for him the different challenges Fantasy Premier League presents make it so appealing.

"You can see why it is so popular what with the various ways you can pick up points," he said. "I find it the best because it makes me think more about what teams I must pick."

Martyniak might even have found that the Barclays Asia Trophy matches he attended in Hong Kong that he won as part of his prize gave him some valuable tips on players ahead of the new season.