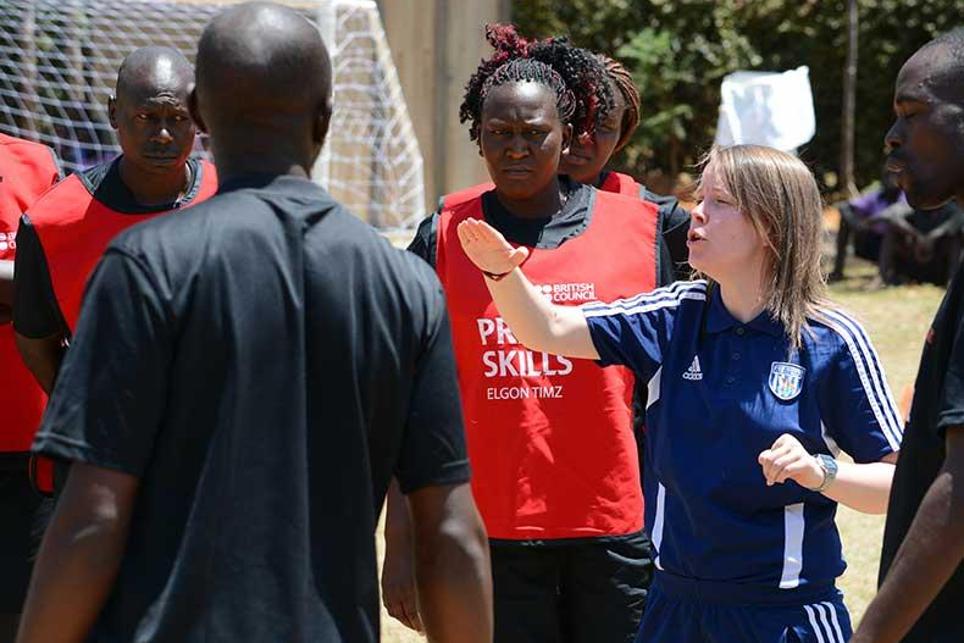 A new partnership between the Premier League, the Department for International Development and the British Council will use the Premier Skills project to tackle issues of violence against girls and women.

Launched in western Kenya, the new programme will provide training for 47 Kenyan football instructors and referees by Premier League coaches from Aston Villa and West Bromwich Albion. The trainee coaches will receive the skills and support to run grassroots football activities in their communities, with a particular focus on working with young people to question the behaviours and attitudes that lead to high levels of violence against girls and women.

The £1.5 million pilot phase, which will be run through Premier Skills, will take place in Mount Elgon, where 45% of women report having experienced violence since the age 15 and more than a quarter within the last year. These are some of the highest rates in the country.

Participation in sport is seen as a powerful tool for addressing gender inequality, and by engaging boys and girls, men and women together through football, harmful social attitudes can be targeted and people can be empowered to speak out within their communities.

"Football’s international appeal gives it the unique ability to inspire change,” International Development Secretary Justine Greening said. "By working with boys and girls through football and developing their leadership skills we can empower them to have a stronger voice within their communities and stamp out abuse, discrimination and violence.

“No country can escape poverty or plan a more prosperous future when girls and women are denied the chance to reach their full potential. Equal access to education, health and decision making is key to boost growth, creating jobs and ending dependency on aid for good.”

Premier Skills has trained over 2,800 grassroots coaches and referees around the world, who in turn have worked with 585,000 young people. The project uses football to develop a brighter future for young people around the world, drawing upon the global appeal of the Premier League and its expertise in delivering community programmes in the UK, alongside the British Council’s global network and track record of delivery.

"It's been fantastic to see the journey that the Elgon Timz coaches have been on over the course of the week," Wynter said. "They've really embraced the concept of community coaching and I've been proud to share my own experience of using a tried and tested methodology from the Aston Villa Kicks programme, where we use football to address social issues."

Elizabeth Njeri Nyaga is one of the local coaches who enrolled on the programme.

"Using football and adding use of simple pictorials will bring about awareness of the issues affecting women and girls and engage the community when they come to watch the football sessions," she said. "By coaching both boys and girls, it’s a beginning to showing people that girls can do what boys can do, especially in football, in a man’s game.

"Also, having male coaches talking about these issues will influence other men. Victims and survivors will learn their rights and avenues for redress."

Premier League Chief Executive Richard Scudamore said the new programme was an extension of the organisation's commitment to engage women and girls in the UK, with more than 150,000 girls involved in programmes in the past year alone

"The right thing to do, given our international reach, is to embed these objectives into our global Premier Skills programme, and over the past few years we have seen growing numbers of women being trained as grassroots coaches and referees across the 25 countries in which it operates," Scudamore said. “This is an exciting next step: working with DFID, the British Council and our partners in Kenya to use the Premier Skills model, and football more generally, to address the issue of violence against women and girls.”

Eliminating violence against girls and women is seen as vital to achieving development outcomes for individual women, their families, communities and entire nations. Women who have experienced violence are more exposed to poor health and are often unable to contribute towards economic growth.

"I am delighted that we can harness the global appeal of football to transport community development programmes from the West Midlands to Western Kenya,” British Council Chief Executive Ciaran Devane said.

"Premier Skills has had great success around the world in helping young people gain the skills to reach their full potential, and through working to reduce violence and gender discrimination I’m sure this project will do the same for the women and girls of Mount Elgon."