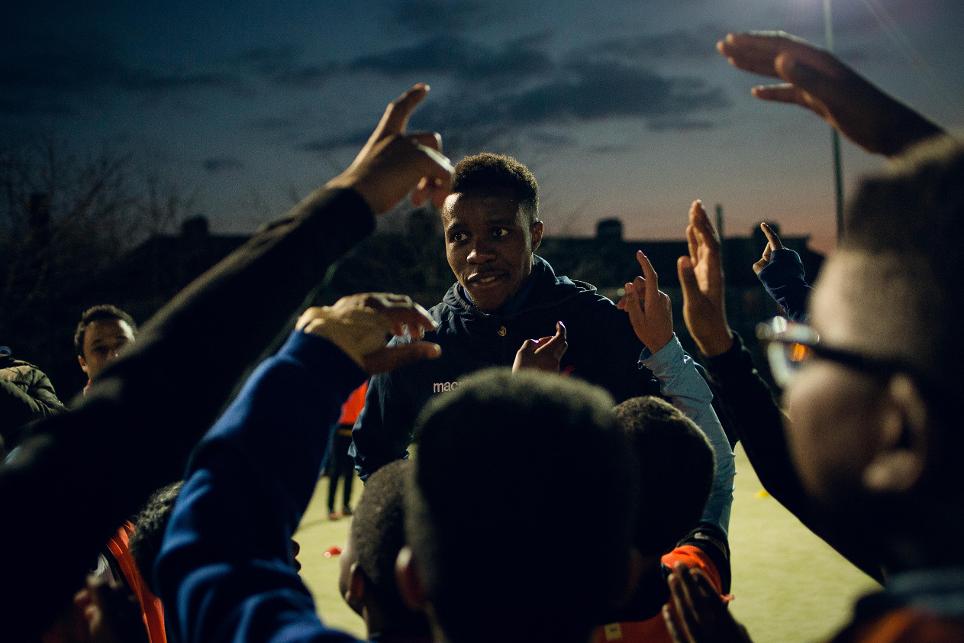 Premier League Kicks External Link
'I'm proud of everyone here, no matter what they go on to do'

Crystal Palace winger Wilfried Zaha revealed the role Premier League Kicks played in his formative years when he recently visited the project in Croydon where he honed his skills as a youngster.

The 22-year-old used to attend PL Kicks at the Canterbury Road site as a teenager, where, with the help of the Crystal Palace Foundation, Zaha began his journey to the top flight of English football.

And Zaha returned to the place where it all started to watch the talent on display as well as to speak and offer advice to the participants hoping to one day follow in his footsteps.

"PL Kicks has done a lot for me," said Zaha, who used to live five minutes away from Canterbury Road and started attending PL Kicks as a 14-year-old. "After a while I couldn't use the back garden because I broke everything!

"It was great to be able to come down to the park and actually have goals, cones and nets and use it for free. It gave me an opportunity to showcase my talent. The sessions were mainly passing drills and from that to games, which I thought were the best sessions ever as I just wanted to play. I used to take on everyone.

"Those times were hard but this gave me a big opportunity and the staff were all supportive. I went from that to where I am now. The whole dream was football from the beginning but I probably would have done something to do with football, if that meant helping out or coaching then I would have."

Coaches who worked with Zaha are still helping out at the Canterbury Road site and they remember the winger fondly. "He always stayed on the outside, he would never go in the centre of the pitch because they would kick him in there, he wouldn't pass!” said PL Kicks coach Michael Lacey. "He stood out a mile."

PL Kicks, which began as a pilot project in 2006, uses the reach and appeal of professional football clubs to engage young people from challenging communities in regular football, sport and personal development activities. It has grown incredibly over the last nine years, with 50 professional clubs in England and Wales now delivering nearly 200 separate projects to over 35,000 participants every week.

By providing a safe, friendly environment in which to socialise and play football, Premier League Kicks over the last nine years has not only helped improved the prospects and opportunities for young people but also played a significant role in reducing anti-social behaviour in certain areas.

And Zaha, who has again established himself as a key member of the Crystal Palace first team after spells at Manchester United and Cardiff City, was full of praise at how the project, which is delivered in partnership with Sport England, the Mayor's Office for Policing And Crime and police forces up and down the country, has had a positive impact in the local community.

"These youngsters could be anywhere else, they could be on the streets or wherever, but they're here playing football and enjoying themselves," Zaha added. "It's about helping the community. It shows that you can come from nothing and become something.

"These lot enjoy football so Crystal Palace PL Kicks is giving them a chance to come and show their talent and that’s a great opportunity.

"I'm the most local footballer you'll probably see. If I need to get something I'll just walk there, so I've probably seen a couple of the young people about and spoken to them already and I'm happy that they’re happy to see me here. I'm just showing them if you put your mind to it in the future you could actually get somewhere.

"It's brought right to their doorstep, they don't have to travel anywhere so they've got no reason not to come and enjoy themselves. It gives them an opportunity to come and use facilities that other people don't have so they should grab that with both hands."