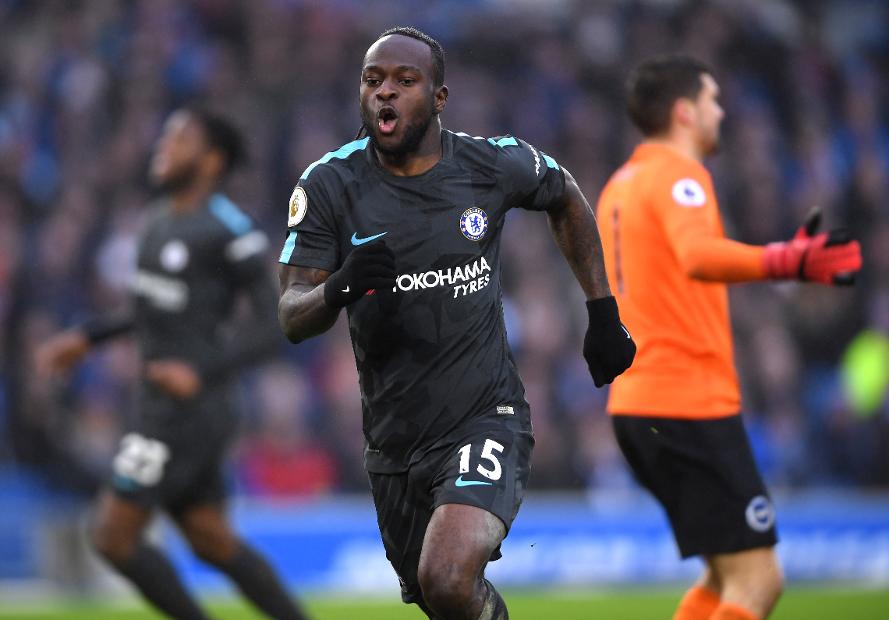 Victor Moses (£6.4m) had the highest score of any defender this season to lead the Fantasy Premier League Dream Team for Gameweek 24.

Moses got 17 points with a goal, assist and a clean sheet from Chelsea's win at Brighton & Hove Albion.

He follows in the footsteps of team-mate Marcos Alonso (£7.3m), whose 21 points last season were the biggest by a defender.

Moses takes his place in a Dream Team line-up that shifts to a five-man defence for the first time since Gameweek 13.

The Leicester City goalkeeper retains his place in our XI after a third successive clean sheet in a 2-0 win over Watford. Schmeichel's two bonus points took him to 14 for the season, the most for his position.

A third assist of the campaign was followed by a first goal as Moses capped Chelsea's 4-0 victory at Amex Stadium. Over the last four Gameweeks, he has had more touches in the opposition penalty area than fellow wing-back Alonso, by nine to eight, and attempted more crosses, 15 to 10.

Monreal claimed 16 points despite playing only 33 minutes against Crystal Palace. He produced a goal, an assist and three bonus points in Arsenal's 4-1 win but is an early doubt for the Gameweek 25 trip to Swansea City.

A first goal of the campaign along with 14 clearances, blocks and interceptions (CBI) in the win over Palace helped the Frenchman claim two bonus points. He now tallies 16 for the season, a total that no defender can beat.

The centre-back scored the winning goal in a 1-0 victory over Liverpool. Mawson recorded 13 CBI to help secure maximum bonus points and a first Dream Team appearance of the season.

The Belgian delivered only his second double-figure score over the last nine Gameweeks in Chelsea's win at Brighton. The Blues next face AFC Bournemouth at Stamford Bridge and Hazard has scored in each of the last four meetings against them.

A goal and an assist in the same match continued Willian's convincing form, supplying a third double-digit tally from five Gameweek starts. He is the second most bought player, attracting 68,000+ new owners ahead of Gameweek 25.

Deployed in a No 10 role by new manager Paul Lambert, the Welshman responded with a second goal of the season in Stoke City's win over Huddersfield Town. That gave Allen three bonus points to take him to 10 for the season, more than any Potters player.

Martial scored a third goal in as many matches to give Manchester United victory at Burnley. Owned by only 2.9% of FPL managers, it earned the midfielder a belated first call-up to the Dream Team.

Matching Moses as the top-scoring player in the Gameweek, the Manchester City striker repaid the faith shown by 581,000+ managers who trusted him with the captaincy. His hat-trick against Newcastle United makes him an early leading candidate for the visit of West Bromwich Albion to the Etihad Stadium in Gameweek 25.