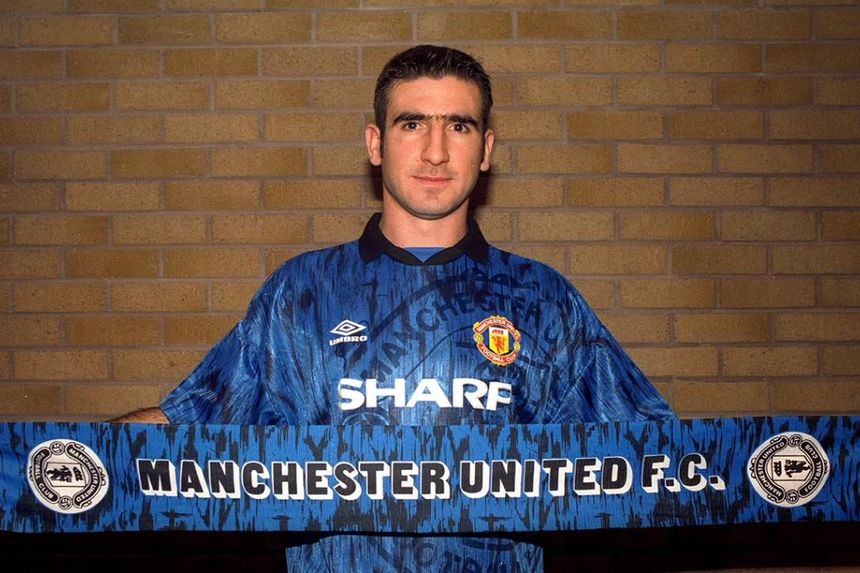 Bill Fotherby, Leeds' managing director in 1992, tells the inside story of a famous transfer

Cantona: The others are great, I am exceptional!
Shearer: Cantona's team-mates looked up to him
1992/93 Season Review: Man Utd win first PL title External Link

It is 30 years to the day since Eric Cantona joined Manchester United, going on to play a starring role in four titles across the Premier League's first five seasons.

But that was not the transfer that Bill Fotherby, managing director of reigning champions Leeds United, had in mind when he made a phone call to Man Utd chairman Martin Edwards in November 1992.

In fact, he was enquiring about signing Red Devils defender Denis Irwin, as he revealed when telling the tale of Cantona's time at Leeds and move to Man Utd, before Fotherby passed away in 2019.

"We had got Eric on a recommendation from Michel Platini, who told (our manager) Howard Wilkinson he could be very difficult to handle but had the potential to be a great player," recalled Fotherby.

"At the time, we didn't have any money. People thought we had won the pools but we were actually potless. Because of that, when we met his advisors to put together a deal we agreed to pay Eric something like £500,000 if we kept him after an initial period of a few months.

"It was an immense amount of money for Leeds - not money we had at any rate - but we agreed to it because we had this recommendation from Platini and we judged the most important thing was to get the player, and deal with the rest afterwards."

There were difficulties almost immediately. "Apart from Lee Chapman, no one in the squad spoke fluent French and for Howard it was a bit of a nightmare," Fotherby went on. "Although we won the title, there was just no connection between them.

"We had a disaster against Rangers in the European Cup and were coming up to the point where this additional £500,000 had to be paid. Howard told me to find Eric another club."

Fotherby had not yet acted on that request when full-back Mel Sterland got injured.

"I rang United about Denis Irwin, who had been at Leeds as a young boy," said Fotherby. "Martin Edwards said there was no chance, but I asked him to at least speak to (Man Utd manager) Alex Ferguson.

"Sometimes people just move to a certain club at a certain time and become something they would never have been anywhere else."

"Normally, I wouldn't have expected him to ring back. This time he did, offering me a different player I knew Howard would not be interested in. It was then he asked about Eric.

“I said absolutely no way and that it was impossible. But obviously I knew what Howard felt about him, and I knew this additional payment was due.

"As I had done before, Martin asked if I would talk to Howard. On that particular day Howard was out house-hunting in Leeds, so the only person I actually spoke to was (coach) Mick Hennigan. I just said, 'I can't believe it. Guess what has come right out of the blue. Howard will absolutely love it.'

"I left it a couple of hours, rang Martin back and said, 'I can't believe this but Howard is willing to let the boy go'."

And so the deal was rushed through, for a fee thought to be around £1million.

"Our fans were bothered," said Fotherby. "They were really bothered. But I would have done exactly the same again.

"Eric was absolutely magnificent for them but it was not all one way. We got something similar when Gordon Strachan came to us and took us from Division Two to champions. Before that, Johnny Giles came from Manchester United and look what he did for Leeds. It happens.

"Sometimes people just move to a certain club at a certain time and become something they would never have been anywhere else. The fact it was Manchester United gave it an edge I suppose but they were the ones who made the offer for a player our manager did not want.

"Howard was an absolute perfectionist. He wanted his players to be disciplined and adhere to a certain team pattern. Eric just didn't fit it.

"Alex Ferguson gave him a free role and probably wasn't quite as strict with Eric as Howard would have been. Eric liked to play to the crowd. That wasn't Howard's way at all."

While Cantona went on to secure legendary status among Man Utd fans, Leeds never reached the heights of the 1991/92 season again.

Indeed, a 4-0 defeat by the Red Devils at Elland Road in September 1996, in which Cantona scored a last-minute goal, marked the end of Wilkinson's time at the club.

Nonetheless, Fotherby refused to criticise Wilkinson for his part in the transfer.

"It was not a question of blaming Howard," he said. "I believed in him and wouldn't hear a bad word against him. He was Leeds' best manager since Don Revie.

"He brought in Gordon Strachan, Gary McAllister and Tony Yeboah. He won us the league. And all the time we were doing it on a shoestring, asking sponsors to chip in here and there to make up the bits we didn't have. For eight years, it worked."