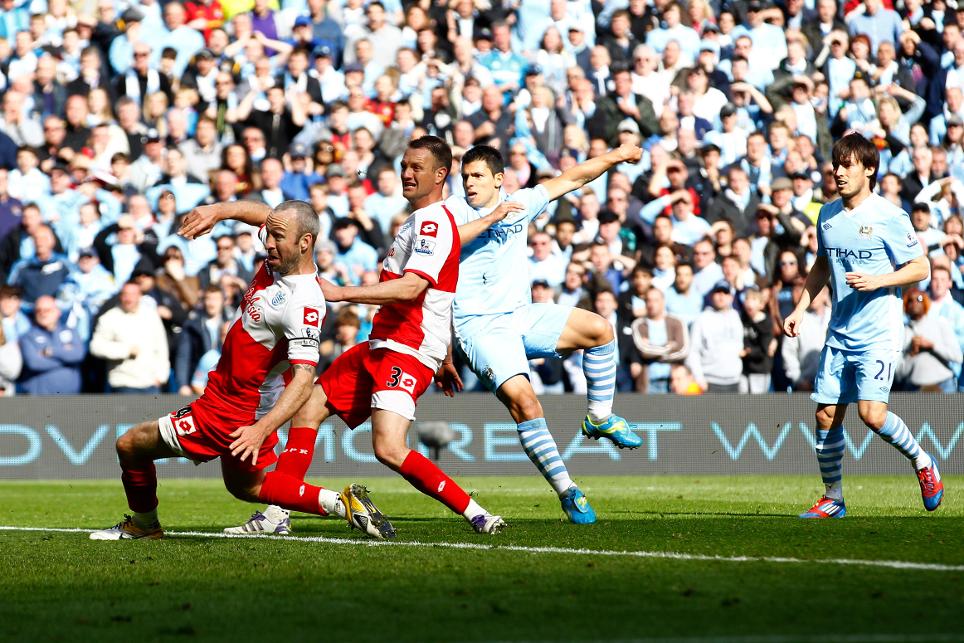 "Staggering, just staggering! He's won the league with 90 seconds of stoppage time to play. It's just the most extraordinary scenario you could have dreamt up. Where does football go from here?"

The words of Premier League TV commentator Peter Drury as bedlam unfolded around him on 13 May 2012, the final day of the Premier League's 20th season.

Having been 2-1 down entering stoppage time against relegation-threatened Queens Park Rangers and needing a victory to win their first league title for 44 years, Manchester City made the unfathomable a reality.

Edin Dzeko and then Sergio Aguero found the net to snatch the Premier League crown from Manchester United's grasp and give an unpredictable season one more improbable twist.

The Manchester clubs established themselves as the dominant teams of the 2011/12 season during the opening weeks.

City's late August 5-1 win at Tottenham Hotspur was immediately bettered by United, who beat Arsenal 8-2 on the same day.

The two clubs were level on points at Christmas, despite City defeating United 6-1 at Old Trafford earlier in the campaign, but the Red Devils pulled eight points clear before another Manchester derby defeat and a costly 4-4 draw with Everton put City ahead on goal difference going into the final day.

"In the space of 20 minutes in the second half we were staring down the abyss."

And as Wayne Rooney gave United a 20th-minute lead at Sunderland, everything was up for grabs once more.

But Pablo Zabaleta put Roberto Mancini's men ahead at the Etihad Stadium, with a shot that was too much for QPR goalkeeper Paddy Kenny six minutes before half-time.

"I have great memories of that day even if people forgot about that I scored in that game," Zabaleta told mcfc.co.uk.

But shortly after the interval, Djibril Cisse pounced on an error by Joleon Lescott to haul QPR level and the emotional gravity of the afternoon remains keenly felt by the central defender.

City appeared to be throwing it away. A red card for QPR midfielder and ex-City star Joey Barton could not turn their fortunes around as Jamie Mackie headed Rangers into a 66th-minute lead.

"In the space of 20 minutes in the second half we were staring down the abyss," City assistant manager David Platt told BBC Radio 5 Live.

Former City manager Mark Hughes, in charge of QPR as they battled to send Bolton Wanderers down at their expense, stated afterwards that the hosts had "lost all direction".

Balotelli entered the fray for the first time since being sent off in a 1-0 defeat at Arsenal, and the hosts piled on the pressure but looked devoid of ideas. With United closing out a 1-0 win, their match was seemingly up.

"Mario held it up, he was half-falling. I was calling for it. I touched the ball, went out wide, then I hit it as hard as I could."

But from their 19th corner of the afternoon came a lifeline. David Silva picked out Dzeko to head in one minute and 15 seconds into five minutes of stoppage time. The comeback was on.

As Mancini's men searched for one last goal, news filtered through that QPR’s PL status was secure. Bolton's 2-2 draw at Stoke City meant they were safe - jubilation from the away end amid unbearable tension elsewhere within the Etihad Stadium adding to the day's surreal nature.

City substitute Nigel de Jong carried the ball towards the halfway line as the full-time whistle sounded at the Stadium of Light.

United had beaten Sunderland and tentative celebrations were underway as Aguero slotted a pass to Balotelli, who slipped but managed to return the ball to City’s Argentinian striker, who fired it past Kenny for an extraordinary winner.

"Mario held it up, he was half-falling," Aguero told BBC Match of the Day 50. "I was calling for it. I touched the ball, went out wide, then I hit it as hard as I could."

City's substitutes and staff streamed on to the pitch and fans wept with joy. At Sunderland, the home supporters played unwelcome messengers to their visitors.

Manchester City's dramatic title triumph was a fitting end to the campaign that was voted as the best ever in the Premier League 20 Seasons Awards.