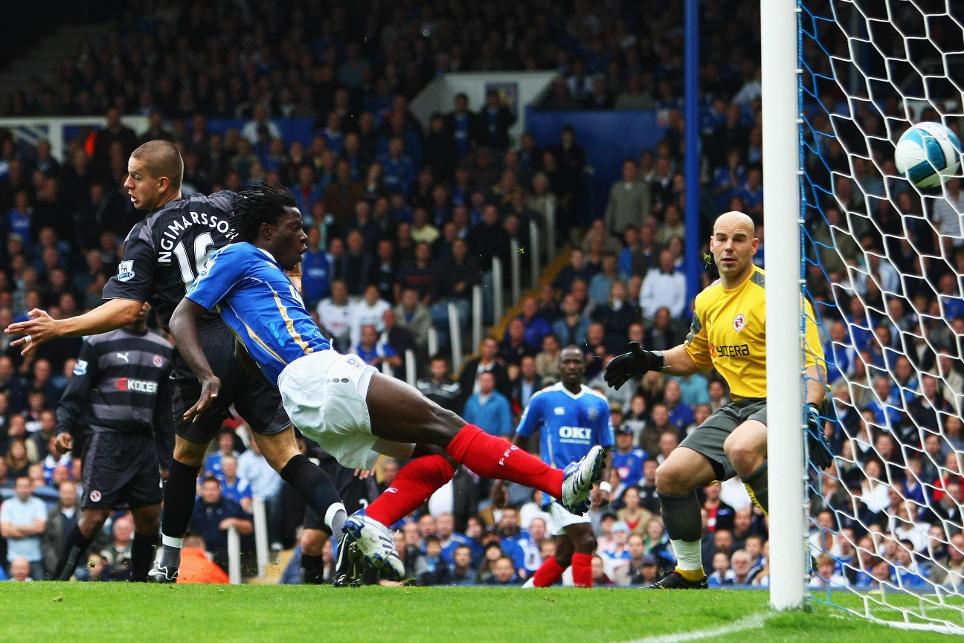 It says much for the unpredictable nature of the Premier League that few observers expected Portsmouth v Reading on Saturday 29 September, 2007 to go down in history. But 11 goals went in at Fratton Park, the highest-scoring match in the PL era, as the hosts won 7-4.

Both teams enjoyed impressive campaigns in 2006/07, with Reading finishing a point and a place above Portsmouth in eighth on their debut PL campaign, but they were struggling to replicate that form next time around.

Like Pompey, Reading had two league wins, but fared slightly worse having lost four of their opening seven matches.

Respective wins over Blackburn Rovers and Wigan Athletic sent each club into the meeting in relatively high spirits, although Portsmouth were without striker Nwankwo Kanu - the match-winner at Ewood Park - due to injury.

His replacement Benjani Mwaruwari would enjoy an afternoon to remember and opened the scoring in the seventh minute, netting from close range after feeding John Utaka to his left before converting the resulting low cross.

The Zimbabwean doubled his tally half an hour later when he drove towards the Reading defence on a solo run and lashed in a low strike from 20 yards.

Reading goalkeeper Marcus Hahnemann then saved magnificently from Glen Johnson during a tough spell for the visitors, who reduced their arrears on the stroke of half-time.
Stephen Hunt scrambled the ball in after Liam Rosenior struck the crossbar and Dave Kitson was then denied by David James.

James and Kitson were in the action once more as Reading pulled level in the 48th minute, the England goalkeeper charging from his area for the striker to touch the ball around him. There was still much to do for Kitson out on the left flank but he finished superbly into an unguarded net.

On a day to forget for goalkeepers, Hahnemann was next under the spotlight. The American failed to reach Sylvain Distin's left-wing cross and Hermann Hreidarsson headed into the net.

James atoned for his earlier error by plunging to his left to keep out Nicky Shorey's penalty after Papa Bouba Diop handled in the area.

"It's difficult to analyse a match like that and if you try you will be there a very long time."

Portsmouth remained 3-2 up until the last 20 minutes, during which a flurry of goals arrived.

Reading midfielder Brynjar Gunnarsson was dispossessed by Sulley Muntari and the Ghana midfielder slipped a perfectly weighted throughball into the path of Benjani, who rounded Hahnemann to complete his first hat-trick in English football.

Sean Davis crossed for Niko Kranjcar to head in Portsmouth's fifth at the back post before James Harper's volley struck substitute Shane Long and went in for Reading in the 79th minute.

But Harry Redknapp's team would race clear as Davis' speculative strike took a decisive deflection off Ivar Ingimarsson and Muntari made it seven from the penalty spot.

That was the first of two goals in stoppage time, with Shorey's strike spinning home off Pompey defender Sol Campbell to make it the highest-scoring match in Premier League history.

"The first half was probably our best 45 minutes this season, but to come in having conceded in the last minute of the half allowed them back in," Portsmouth coach Joe Jordan told BBC Sport.

"Even at 2-2 I don't think anyone expected the score to be exaggerated to 7-4 but overall I think the best team won. People say we only play one up front but proved that it's really three and no-one deserves a hat-trick more than Benji."

Reading manager Steve Coppell said: "It's difficult to analyse a match like that and if you try you will be there a very long time.

“We scored four goals away from home and had a chance for another with a penalty. We played a full part in the game - I don't think many teams will come here this season and score four.

"Both sets of strikers looked irresistible at times but both sets of defenders will be unhappy at that scoreline. Defensively we have to improve, but it must have been great for the impartial observer."

The 11-goal thriller was the second in a 10-match unbeaten league run for Portsmouth, firmly establishing them in the top half of the table to push for a European place - something they achieved as Kanu scored the only goal to overcome Cardiff City in the FA Cup final in May 2008.

Reading continued to entertain. Three months later they were on the wrong end of a 6-4 defeat at Tottenham Hotspur.

Unfortunately for Coppell, as his former club Manchester United won the Premier League title, his players suffered relegation and dropped into the second tier along with Birmingham City and Derby County.

Fulham, who were on the brink of the drop before coming from 2-0 down to beat Manchester City 3-2 with three weeks left, won their next two matches to narrowly avoid safety.