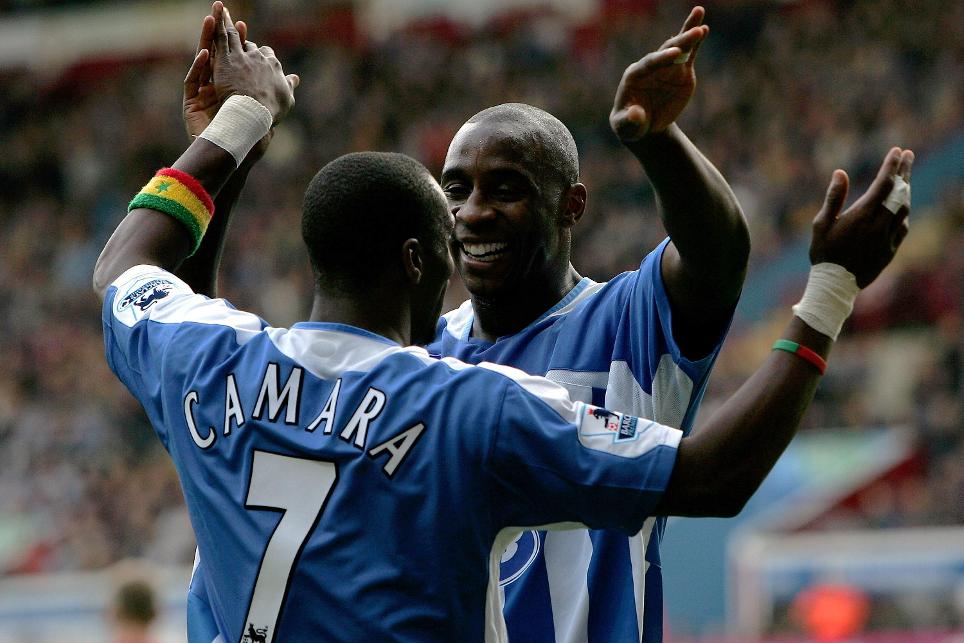 Jason Roberts recalls Latics' attacking style as they went as high as second in their first PL season, 2005/06

Wigan Athletic surpassed all expectations to take the Premier League by storm in their debut top-flight season, climbing up to second in November before eventually earning a 10th-place finish.

Narrow losses in their opening two matches demonstrated that Paul Jewell's men could hold their own, but did little to dissuade the perception that they could instantly return to the Championship.

A Jason Roberts penalty secured a 1-0 win over Sunderland to get Latics up and running and spark a storming run of form, with eight wins out of nine securing back-to-back Manager of the Month awards for Jewell and a five-point cushion above third-placed Arsenal.

Roberts identifies a fearless attitude among the squad and a commitment to attacking football as the key factors to a successful season, in which the striker netted eight PL goals.

"Lots of pundits wrote us off so there was a lot of feeling that we had nothing to lose," Roberts told premierleague.com.

"We played 4-4-2, we were very attack-minded. Henri Camara came in alongside myself up front.

"We had some experience with the likes of Stephane Henchoz and Arjan De Zeeuw in central defence. It gave us a lot of belief.

"Even though we lost our first two matches by tight margins, I was lucky enough to score the winner against Sunderland in the third match. From then on we enjoyed a lot of confidence and that confidence just continued to build and build.

"We didn't try to hang on, play 4-5-1 and stifle the opposition; we tried to beat the opposition and we got our rewards in September and October."

Roberts' partnership with Camara, who netted 12 times in 29 PL matches, was made possible by Jewell's commitment to playing 4-4-2 – tactical simplicity that he believes empowered the squad.

"He simplifies the game," Roberts said. "Tactically, it was very simple: 4-4-2. We played a high tempo, we played up the pitch.

"There wasn't huge tactical nous to it but we were very organised. The characters we had and the recruitment was key."

'We should have beaten Chelsea'

Despite a host of memorable victories, the defining match of Wigan's Premier League bow is perhaps the one that got away.

Jose Mourinho took champions Chelsea to face the Latics in their first match of the season.

Wigan went toe-to-toe with their illustrious opponents and a superb stoppage-time winner from Hernan Crespo proved hard to swallow. Afterwards, Mourinho himself expressed sympathy for Wigan and said they did not deserved to lose.

"This was a team who turned up with the likes of [Shaun] Wright-Phillips and [Joe] Cole on the bench. [Arjen] Robben, [Damien] Duff, [Didier] Drogba, Crespo; it was a star-studded side.

"We should have won that match. We had enough chances. Then Crespo scored an unbelievable goal in injury time, showing his quality.

Roberts holds that Chelsea squad in high regard, describing them as one of the best teams in the Premier League era.

"That's got to be one of the best teams to have performed at Premier League level," he said. "If you look at what the spine of that team went on to achieve over the next seven or eight years, it's been remarkable."

Wigan fans are unlikely to look beyond their 2005/06 side when assessing their finest team, although Roberts' memories of the season are tinged with regret after defeats in their last three matches resulted in their finishing 10th, having been just three points off sixth-placed Blackburn Rovers, who qualified for the UEFA Europa League, prior to that losing streak.

"At the end of that season I recall a feeling of frustration because we lost our last three matches," he added. "I know top 10 is the highest Wigan have ever got but we were underwhelmed because we could have done better and that remains with me until this day."