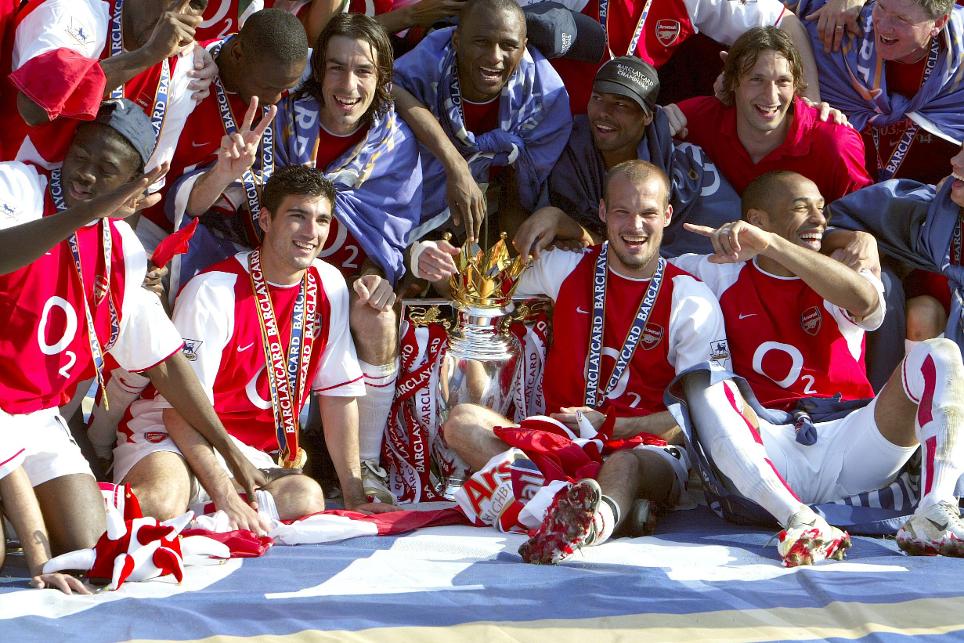 "At the time we didn't really think we were part of something special because you never know you are going to do it until the end."

In May 2004, Arsenal completed the season as Premier League champions and became the first team in the competition's history to go through an entire campaign unbeaten.

Patrick Vieira, who captained 'The Invincibles' to footballing immortality, recalls the keys to success in 2003/04.

Under manager Arsene Wenger, the Gunners scored 73 goals as they finished 11 points clear of nearest challengers Chelsea and became the first side since Preston North End in 1889 to conclude a top-flight campaign without defeat.

"When you have players like Bergkamp and Henry in your team you know that something will happen."

Midfielder Vieira, who claimed three PL titles in nine years at Arsenal, said their unrelenting work ethic was the key to success: "We had a commitment, we worked really hard, we had momentum and overall the spirit between the players and in the football club was so positive.

"It was all about believing in ourselves that we were going to win a game or at least take a point. Our self-belief as a team was fantastic.

"At the time we didn't really think we were part of something special because you never know you are going to do it until the end."

On the occasions when Arsenal found themselves in a tight spot during 2003/04, they had one of the most gifted forward lines in PL history to call upon.

Thierry Henry led the way, scoring 30 goals in 37 league appearances, 41% of Arsenal's total haul. Wingers Robert Pires and Freddie Ljungberg and Dutch forward Dennis Bergkamp weighed in with 22 goals and 20 assists between them.

"When you have players like Dennis Bergkamp and Thierry Henry in your team you know that something will happen during the 90 minutes," Vieira reflected.

"They were scoring goals and we were working really hard at the back, it was a good combination and a good team.

"You never believe you can do it. For us, our only focus was to play game after game."

Their unbeaten run was threatened over the course of the season, perhaps most notably when Manchester United striker Ruud van Nistelrooy missed a last-minute penalty that allowed Arsenal to leave Old Trafford with a 0-0 draw in September.

In their 31st Premier League match, the Gunners were 2-1 down at half-time to Liverpool. Pires levelled the match before Henry took over with a stunning hat-trick.

Former Arsenal striker Paul Dickov put relegated Leicester City ahead on the final day of the season at Highbury, suggesting an unlikely twist in the tale.

But Henry levelled matters before Vieira had the final word. Even though it was an unprecedented achievement, the 1998 FIFA World Cup-winning France midfielder believes another side can go through a Premier League campaign unbeaten.

"Near the end we were getting nervous because people kept talking about it," he added. "Can anyone do it again? Never say never because in football anything can happen. It will be difficult to do it but I am sure a team will.

"I think it will take a special team to do it. Of course you need luck but overall you need to believe as a team.

"When you achieve something like that as a team it is really special because people will talk about it until it gets beaten, and you never know how long it is going to take. It was a fantastic team performance."