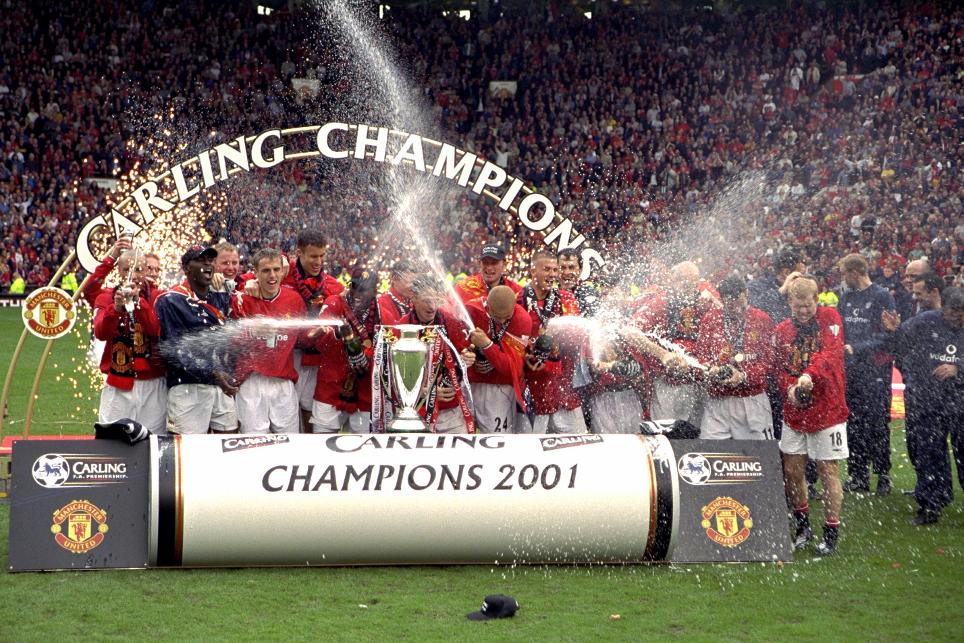 Manchester United started the Millennium as defending Premier League champions, and they carried on their unprecedented success in 2000/01 with a seventh title in nine seasons since the competition's inception in 1992. Sir Alex Ferguson's side also became the first team to win three consecutive top-flight crowns since Liverpool in 1983/84.

With United winning the league by an 18-point margin last time round, Sir Alex Ferguson's only major addition was FIFA World Cup-winning France goalkeeper Fabien Barthez. A number of the Premier League's top sides were busy, though, as a host of clubs looked to challenge United's dominance.

The strike pairing of Jimmy Floyd Hasselbaink and Eidur Gudjohnsen moved to Chelsea, but one win from their opening five matches led to the departure of manager Gianluca Vialli, who had won five trophies in two years in charge. He was replaced by fellow Italian Claudio Ranieri, and Hasselbaink went on to win the Barclays Golden Boot with an impressive 23-goal haul as the Blues recovered to finish sixth.

Another Italian made the headlines with a sporting gesture that won the 2001 FIFA Fair Play Award. Paolo Di Canio stopped his own side's attack by catching a cross during West Ham United's encounter with Everton as the opposition goalkeeper Paul Gerrard was down injured in December. One week earlier, Ledley King had opened the scoring in Tottenham Hotspur's 3-3 draw at Bradford City in just under 10 seconds, making it the fastest goal in Premier League history.

Arsenal had finished runners-up in the previous two Premier League seasons, and they moved level on points with second-placed Man Utd when they beat the defending champions 1-0 at Highbury in October. The victory was sealed by a moment of brilliance from Thierry Henry, who flicked up the ball with his back to goal and found the top corner with a volley from outside the penalty area.

The surprise Premier League leaders at this stage were Leicester City, who had won the League Cup the previous season. United beat the Foxes in their following match to reach the summit, and a run of eight victories on the spin helped the Red Devils surge clear at the top of the table.

United remained top for the rest of the season and a 6-1 thrashing of Arsenal at Old Trafford in February, including a first-half hat-trick for Dwight Yorke, sent Sir Alex Ferguson's team 16 points clear of the Gunners, who were their nearest rivals. They sealed the title in April, before losses in their final three matches reduced their lead to 10 points by the end of the campaign.

While United romped to the title, the race for European places was wide open and two sides who enjoyed remarkable runs in European competition met at Elland Road in November. Australian striker Viduka was the star of the show, scoring all four goals as Leeds beat Liverpool 4-3.

Despite the win, Leeds dropped to as low as 14th place in January, but the addition of West Ham defender Rio Ferdinand and an incredible run to the semi-finals of the UEFA Champions League galvanised David O'Leary’s side.

A win for the Yorkshire side in the reverse fixture at Anfield moved them up to third on 13 April, but McAllister scored a long-range free-kick in the dying moments of Liverpool's 3-2 win at Everton in their next fixture, and the Reds went on to pick up 19 points from the remaining 21 as they sneaked ahead of Leeds to secure the third and final Champions League spot. The Merseysiders' season was rounded off with a unique treble of League Cup, FA Cup and UEFA Cup (now UEFA Europa League) victories.

The other unlikely contenders for the European places were newly promoted Ipswich Town, who were in third position until 21 April in an astonishing first season back in the top flight. George Burley guided the Tractor Boys to a final finish of fifth, just three points adrift of third-placed Liverpool, and he won the Barclays Manager of the Season award. Ipswich were also inspired by striker Marcus Stewart, who netted 19 goals in his debut Premier League campaign to fire his side towards a first foray into Europe for 20 years.

Manchester City, who had joined Ipswich in promotion from the Championship, were unable to emulate the East Anglian side's success and were consigned to relegation. They were joined by Bradford City and Coventry City, the latter demoted from the Premier League for the first time after a series of great escapes in the 1990s.

Although the title and relegation places were wrapped up before the final day, the season still had a thrilling finale as Southampton's Matt Le Tissier scored a brilliant half-volley to clinch a last-gasp 3-2 win against Arsenal in the Saints' final match at their 103-year-old stadium, The Dell. The strike was also Le Tissier's 100th and final goal in the Premier League, cementing his cult-hero status with his only professional club.