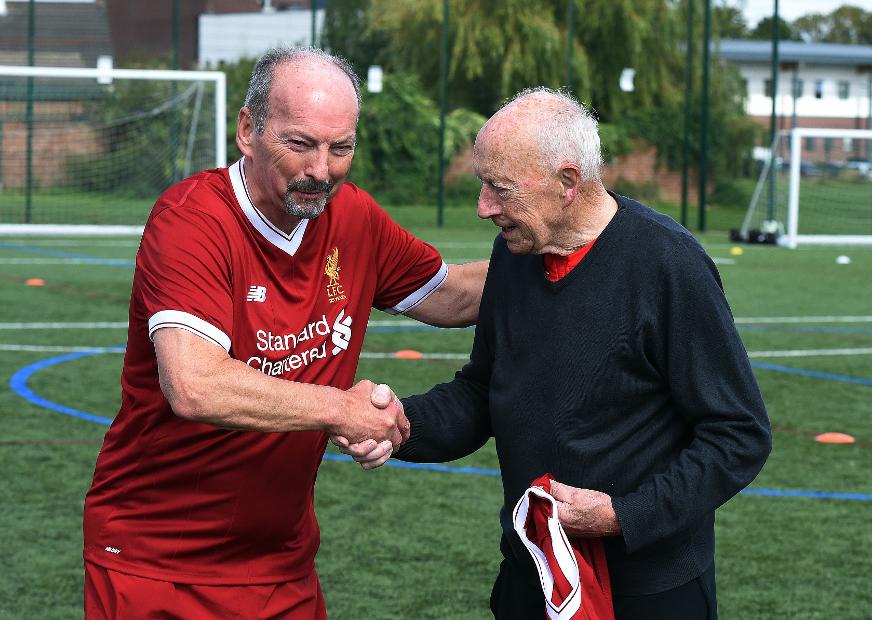 To play the game he loves, Jim Mounsey felt he had to tell a lie to secure a place on the team.

"I said I was 82 because I thought if I said I was 89 they'd say, 'Jim, you're a liability! If one of the fellas hits you, you might have a heart attack'"

The Liverpudlian (pictured right, above) had kept himself active in the house every morning and rode his bike when the weather allowed.

But despite all that activity, Jim still found he had time to fill and got bored.

"Normally, I've had to struggle to find what's going to occupy me because I get fed up keeping the house clean," he explains.

.@Red_Neighbours have been working hard to bring people together who may find themselves socially isolated. We met four stars of the Walking Football initiative to hear about how the project is making a difference to their lives.

Thanks to the Anfield Sports & Community centre. pic.twitter.com/A9C5HPvwGe

Eager for something else to do, Jim spoke to a friend about getting back into playing football.

"I said, 'I feel it you know; I miss making a clinical pass with the ball and all that.'"

Jim is now a walking football regular and as well as feeling the physical benefits, he is also enjoying the company and camaraderie that comes with being part of a team.

"I enjoy talking to all the lads," he says. "They're a great bunch and they accept me, they are patient with me.

"I am getting fitter all the time but I'm not up to my old peak!"

The Red Neighbours Walking Football programme does not just help those who play.

It has become a part of the life for Liz Hayes, 68, and Edith White, 79, too, who go along every week to cheer on the players.

Edith lost her husband six years ago but the pain has been eased by the relationship developed with the walking football players.

"It's the best day of the week because we just laugh all the time," she says.

Tommy Doran, 72, has been with the programme since it started last summer.