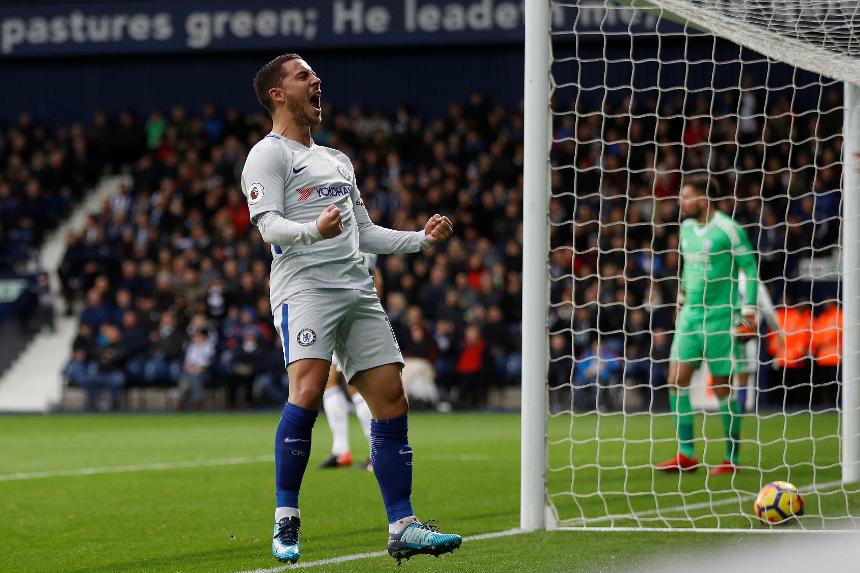 The Belgian top-scored in Gameweek 12 in a new No 10 role for Chelsea but is part of only 5.4% of squads.

Hazard takes his place in a free-scoring midfield, as the Dream Team lines up in a 3-5-2 formation.

The Cherries No 1 claimed a third clean sheet in six Gameweeks in the 4-0 win over Huddersfield Town. Only Lukasz Fabianski (£4.6m) has made more saves (48 to 43) than Begovic, who has also supplied three bonus points in the last two Gameweeks.

Back in the Arsenal XI for the first time since Gameweek 7, Mustafi claimed 14 points thanks to a goal, maximum bonus and a clean sheet in the north London derby. The Gunners have kept a shutout in each of his last five Gameweek appearances.

A third goal of the season at West Bromwich Albion elevated the Chelsea wing-back into fourth spot in the defender standings. Alonso leads all defenders for both shots (19) and shots on target (six).

The raiding right-back earned a seventh clean sheet and maximum bonus points in the win at Leicester City. With four assists so far, Walker is now Manchester City's top-scoring defender on 57 points.

Two goals and an assist in the 4-0 win at West Brom earned Hazard a second Dream Team appearance in three Gameweeks courtesy of 18 points. Moved into a No 10 role in the last two Gameweeks, he has fired seven shots on target over that period - more than any other player.

The Frenchman grabbed a goal, an assist and two bonus points at home to Newcastle United upon his return from injury. Pogba is the top transfer target for Gameweek 13, claiming over 214,000 new owners ahead of a visit from Brighton & Hove Albion.

Two goals against Southampton and 16 points took him to the top of the overall standings and rewarded the 8.9% of FPL managers who handed him the captaincy. Salah has now been named in the Dream Team on four occasions - a tally matched only by Harry Kane (£12.8m).

Owned by only 5%, the playmaker flourished on his return from injury. A goal and an assist against Saints means that Coutinho has now returned double-digits in three of his six Gameweek appearances. When on the pitch, he has scored or assisted 56% of Liverpool's goals - more than any team-mate.

Watford's midfielder profited from a change of tactics in only his second start of the season. Stationed alongside Richarlison (£6.5m) in a 3-4-2-1, Hughes produced a goal and an assist to earn a Dream Team debut.

One of only two forwards to score double figures, Niasse has been snapped up by over 124,000 FPL managers after grabbing a goal and an assist at Crystal Palace. However, the Senegalese could now face a two-match suspension following Tuesday's FA charge for a "successful deception of a match official".

Another player rewarded with a maiden Dream Team bow in his second start of 2017/18, Wilson delivered a devastating hat-trick against Huddersfield Town. All of his next four opponents score just two in the Fixture Difficulty Rankings.