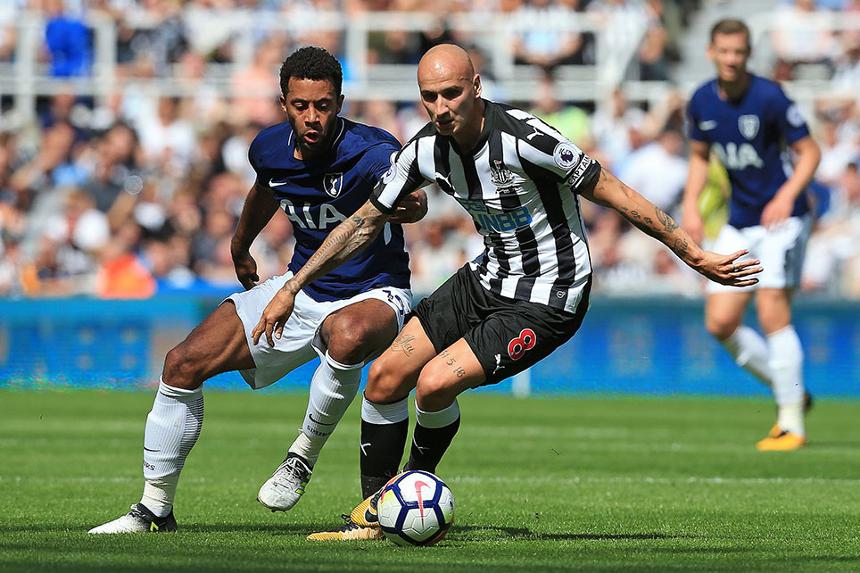 Jonjo Shelvey's season got off to a nightmare start when he was sent off on the opening weekend, but the Newcastle United midfielder is now back in Rafa Benitez's good books, and according to Adrian Clarke he has a pivotal role to play at Old Trafford this weekend.

With impressive Spaniard Mikel Merino likely to miss out through injury, the Magpies will be reliant on Shelvey holding their midfield together at Manchester United on Saturday evening.

Since reclaiming a starting berth against Liverpool on 1 October, the 25-year-old been an ever-present in the side.

He has yet to score a goal or provide an assist, but Shelvey's form has steadily improved in recent weeks, even if England manager Gareth Southgate has not been persuaded to call him up.

From a tactical perspective it is his long-range passes that could be of critical importance in this fixture.

With Man Utd likely to dominate possession and territory, once the ball has been turned over Benitez will want Shelvey to release passes from back to front with speed and pinpoint accuracy.

This is his forte. So, on transitions of play wingers Christian Atsu and Matt Ritchie will be targeted with long diagonals, and if striker Dwight Gayle is selected to start, his runs into the channels will offer the midfield man another outlet.

Should Joselu be given the nod up front, Shelvey’s crisp vertical passes into the centre-forward will also need to be extremely precise.

A failure to provide the type of balls Joselu can hold up could lead to waves of pressure being exerted upon the Magpies defence.

To give the players behind him breathing space, Shelvey’s distribution must be excellent.

Last time out at home to AFC Bournemouth (see above) a number of Shelvey's long-distance passes went astray.

His passing statistics do not always look pretty but this should not be frowned upon too much.

He is a central midfielder who never shies away from attempting a defence-splitting ball that turns the opposition.

This can at times be frustrating but in a contest like this at Old Trafford it may take just a single match-changing pass from Newcastle's "quarterback" to alter the complexion of the encounter.

He will be encouraged by Benitez to look for direct opportunities and if United's attack-minded full-backs leave spaces in behind, Shelvey has the ability to slide either Atsu or Ritchie into dangerous areas with one 30 or 40-yard pass.

Shelvey in PL since 1 October

Interestingly, Shelvey's last three appearances against Man Utd (all for Swansea City) each ended in 2-1 victories, so his record against the Red Devils is excellent. He could be the Magpies' lucky charm.

On Saturday it will be his job to keep positional discipline, break up possession efficiently and then use the ball wisely when he gets the chance to release a forward.

Newcastle will certainly require Shelvey's creative eye in this contest and the weeks and months to come.

Until now Benitez's side have only scored seven goals from open play and only two of those occurred away from St James' Park.

From set-pieces Shelvey, along with Ritchie, is supplying quality ammunition, but more is required when the ball is live.

If the visitors gain a positive result from their trip to the Theatre of Dreams on Saturday, it is likely their deep-lying playmaker will have had an outstanding match.