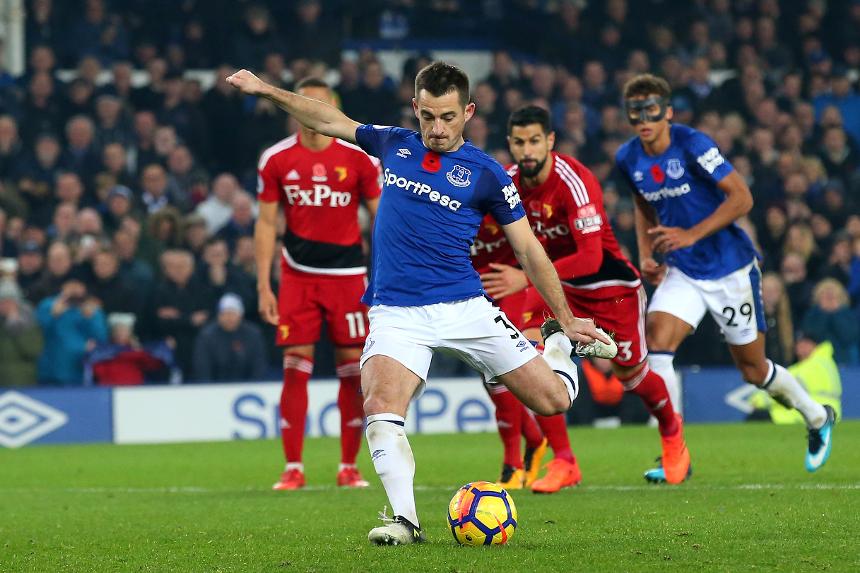 Unsworth: This has to kick-start our season External Link

A late strike from Leighton Baines clinched a comeback 3-2 victory for Everton against Watford on Sunday and also placed him among the top 10 penalty takers in Premier League history.

The left-back's winner, which came in stoppage time, was his 19th successful PL penalty, making him the third player from Everton to join the list.

The 32-year-old is just two behind team-mate Wayne Rooney, who might have taken the penalty himself had he not been substituted off earlier in the contest, and four behind caretaker manager David Unsworth, who like Baines was also a defender, in the top 10.

Baines has some way to go to catch Alan Shearer, who leads the way with 56 penalties scored in the PL, although the Everton defender beats the competition's all-time top scorer when it comes to his conversion rate.

Having only missed two penalties, Baines boasts a conversion rate of 90.5%; the third-best in the top 10 behind former Southampton midfielder Matt Le Tissier (96.2%) and Arsenal great Thierry Henry (92%).

Sergio Aguero, whose penalty against Arsenal took him 24 scored, is the other active player in the top 10.