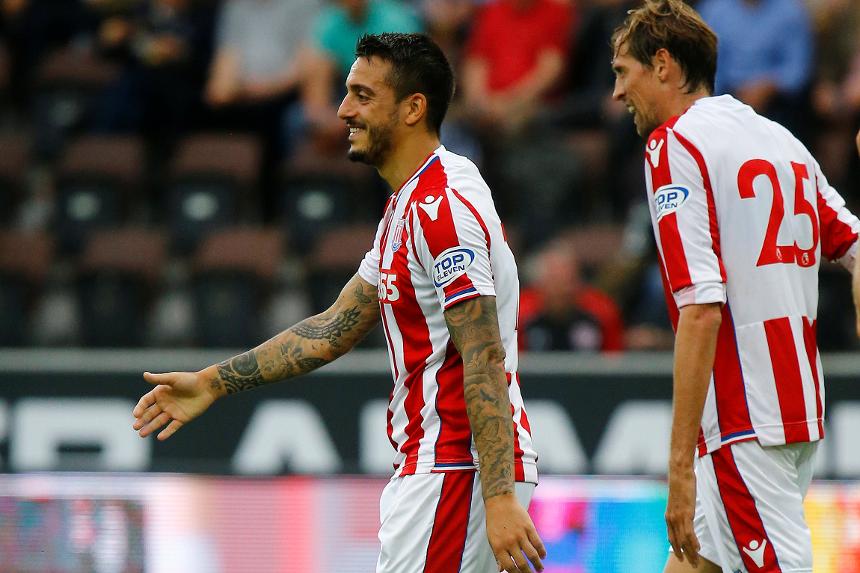 The Scout has spotted a number of trends in tactics and selections during pre-season.

After revealing the unearthed potential at Manchester City and Crystal Palace, attentions turn to an unlikely target at Stoke City.

Stoke’s Joselu has emerged as a surprise contender for Fantasy Premier League selection.

He has now been added to the game, valued at £5.5m, making him another candidate for the third forward role in our FPL squads.

Joselu was on loan at Deportivo La Coruna last season. He scored five goals in LaLiga from nine starts, making another 11 appearances from the bench.

Stoke have recorded 41 goals in each of their past two seasons and manager Mark Hughes will be looking for improvement.

He has been testing several formations in pre-season and deployed two strikers as part of a 3-5-2 in Tuesday’s defeat to St. Pauli.

That system could pave the way for Joselu to partner Saido Berahino (£6.0m), or allow Peter Crouch (£5.0m) to claim a starting role for the Gameweek 1 visit to Everton.

Hughes’ shift to a three-man defence opens up other bargains in the Stoke squad.

Both Glen Johnson and Geoff Cameron (£4.5m apiece) could be handed starts.

Johnson is set to vie with FPL forward Mame Biram Diouf (£5.5m) for the right wing-back berth. But Cameron could be unchallenged for starts, either as one of three centre-backs or in a holding-midfield role alongside Darren Fletcher (£5.0m).

That scenario may also hand Joe Allen (£5.5m) a more advanced midfield role with the freedom to support the attack.

Allen offered good value for a spell in 2016/17 and his progress should be tracked again this season.

However, there is likely to be little immediate interest in Hughes’ line-up.

Aside from the daunting GW1 trip to Goodison Park, Stoke face four of last season’s top six over the first eight Gameweeks.

That run amounts to a combined score of 27 in the Fixture Difficulty Rankings (FDR). It is the most difficult opening spell of any Premier League side.

But from Gameweek 9 the schedule turns.

The Potters will then face only two of last season's top six – Liverpool (home) and Tottenham Hotspur (away) – over the 12 Gameweeks that follow.

That could be the time to check in on a settled Stoke line-up and the value options on offer.

﻿See: Milivojevic given licence to thrill in FPL﻿