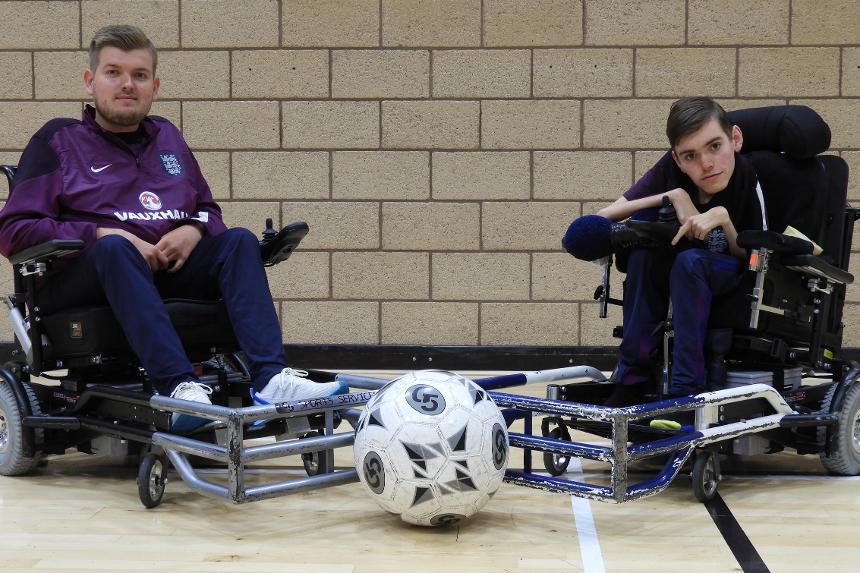 England start their campaign for glory at the third Powerchair World Cup in Florida today.

Chris (pictured left above), talks about what playing Powerchair football for West Bromwich Albion and the Albion Foundation have done for him.

"I have always been into sport and football in particular. As a child I attended football camps perched on my knees in goal, diving all over the place.

"But as I got older and began to rely on a wheelchair more I discovered Powerchair football.

"My first experience was at Aston Villa PFC but I didn't fall in love right away. We started with gigantic footballs and we used half a car tyre to drive the ball around a sports hall. It was not my idea of the 'beautiful game'.

"However, after some convincing I got involved and was soon dribbling the ball round many players like Lionel Messi!

"There was a more local Powerchair club run by the Albion Foundation. I went along to a friendly between Villa and WBA and I thought, 'I'm better than these players'. I was desperate to get involved.

"I was asked if I wanted to play in the next game and it was an opportunity I jumped at.

"I was officially invited to play for West Brom's Powerchair Football team and went to training every Tuesday night. It wasn't long before I was captaining the side in the Wheelchair Football Association National League against the country's top teams.

"I am now in my 10th consecutive season as captain and am now also player/manager.

"Last year, I led the side to second place in the European Powerchair Football Association Champion's League in Denmark. It's the club's biggest achievement to date.

"At international level, I had the honour of being selected for England's Powerchair World Cup squad in 2011 in Paris.

"It was an incredible experience being able to play at the top level of my sport and we went on to secure second place behind the USA.

"Following our success we became an official FA Disability Squad and began training at St George's Park alongside the England first team.

"It's every young boy's dream to play for England and represent your country and now we were.

"We were all awarded England caps and received them at half-time at Wembley Stadium; I have never felt so proud.

"I am also keen to share my experience and love for the game with younger players to develop the next generation. I coach three teams of varying ages and abilities competing across the development, regional and national leagues.

"The sport has developed significantly. In 2014, a new purpose-built sports powerchair called Strike Force added a whole new dimension to the game.

"They were made in the US so I made it my mission to make it available to all players across the UK and built my company G5 Sports Services.

"We have helped provide over 90 chairs to players and clubs around the country including multiple chairs to the Albion Foundation. It has been amazing to help the sport progress in such a positive direction.

"This Powerchair World Cup in Florida is our most important tournament yet.

"We enter as second seeds but are confident we will go one better than last time and bring the World Cup home."