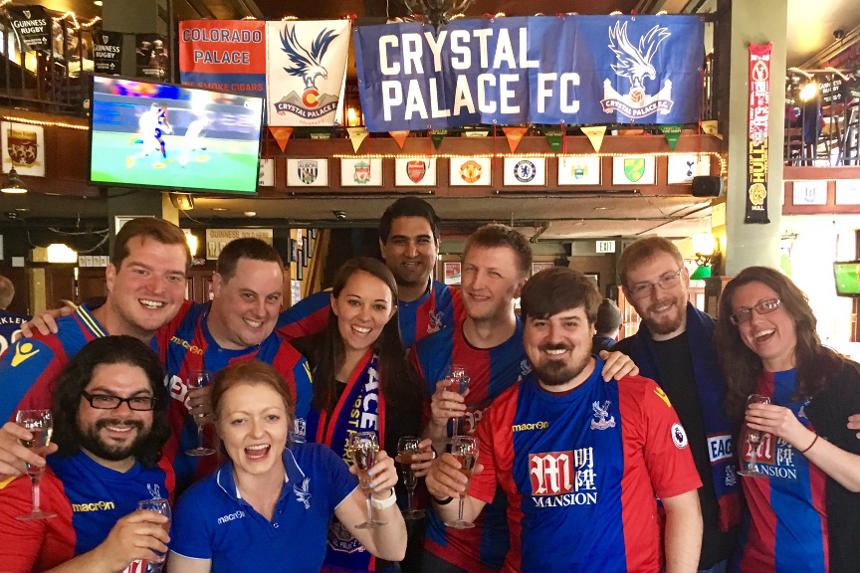 Ian from Colorado was captivated by the story of Crystal Palace and now meets other fans for breakfast, beer and Premier League football.

Premier League fans are found all over the world and the fan base is growing. One country not always associated with Premier League football though is the USA, yet many Americans are increasingly tuning in.

During the 2016/17 season NBC Sports’ coverage of the Premier League reached 33 million unique viewers, while we launched @PLinUSA on Twitter and Instagram to engage US fans via social media.

One such fan is 39-year old Ian Van Mater from Denver Colorado (pictured below left) who revealed the very careful consideration he put into finding the perfect Premier League team for him.

"Previously I had only watched the USMNT, World Cups, or MLS games. I wanted to take my time picking a team to support.

"I generally support underdogs (like the Auburn Tigers, my favourite college football team) or teams that have the potential to overachieve.

"The most important thing to me is a team's story. Over two years I watched games and met other fans and learned the different histories of teams in the Premier League.

"After narrowing it down to several mid-table teams, I eventually chose Crystal Palace because of their unique comeback story and the amazing support I saw from their fans. It didn't hurt that they had an Eagle mascot and the Crystals cheering them on too!

"For every Palace game I join Colorado Palace, a group of fellow fans (including a couple of English expats) at our local pub to cheer on Palace. It's hard to argue with starting your day with great soccer, beer, breakfast, and great friends.

"I've made two trips to England so far, to see Palace defeat Sunderland in the last seconds of extra time at the Stadium of Light and in April to see Palace beat Arsenal at home at Selhurst Park.

"I also saw them defeat FC Cincinnati when they came stateside last summer. Every experience was incredible and I can't wait for the next chance to see them play.

"I think NBC is doing a great job. Rebecca Lowe, Kyle, and the two Robbies are all engaging hosts and bring lots of insights during broadcasts. The Men in Blazers bring their suboptimal (funny and brilliant) takes after games and on their podcast.

"Every game can be streamed so if I can't make it to the pub I can at least have it up on my iPad. I think they've definitely helped grow support in the US for the Premier League."