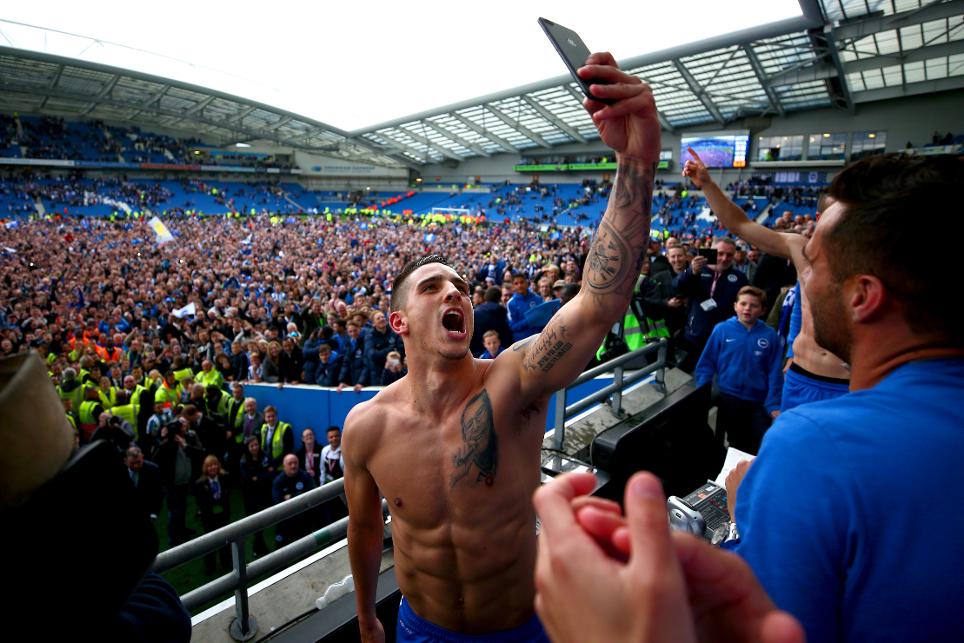 Brighton & Hove Albion have been promoted to the Premier League for the first time.

Chris Hughton’s side, who beat Wigan Athletic 2-1 on Monday afternoon thanks to goals by Glenn Murray, above, and Solly March, needed to better Huddersfield Town’s result against Derby County.

A 1-1 draw later in the day for Huddersfield confirmed the Seagulls’ promotion.

Brighton will become the 48th club to appear in the Premier League when they join the top flight this summer for the first time since their relegation in 1982/83.

We're going to the Premier League! One of the best feelings in the world! Thanks god for everything 💙 #together@AKnockaert @beramangela pic.twitter.com/02kECUPb6n

The south-coast side missed out on automatic promotion by goal difference on the final day of last season, when a draw at Middlesbrough meant their opponents went up along with Burnley.

They lost the ensuing play-off semi-finals against Sheffield Wednesday.

But Brighton bounced back magnificently this campaign, winning 28 of 43 matches, including all five this month and bettering last year's total of 89 points.

"I’m incredibly proud of the way that they bounced back [from last season]," Hughton told seagulls.co.uk. "To put together the run they have, at this stage of the season, is incredibly difficult, and they deserve every bit of credit.

"Right at this moment, this is the most exciting one [achievement]. I went up with Newcastle as a team that just came down, and although we’d lost players, I had a very strong team.

“At Norwich it was different, they were already a Premier League team and we managed to finish 11th in that first season.

With three matches remaining, Newcastle occupy the second automatic promotion spot, six points ahead of Reading, with Huddersfield a point further back, but with a fixture in hand.

Wednesday, Fulham and Leeds United are also vying for the four-team play-off spots.