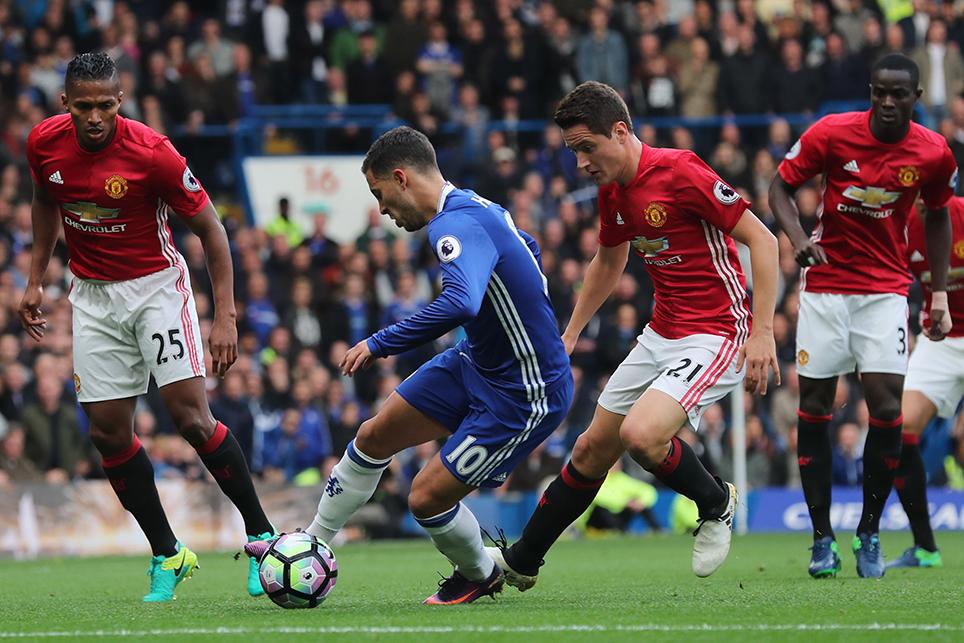 Ahead of what promises to be an intriguing battle Adrian Clarke picks out some key areas to watch.

Who will dictate the tempo?

It is in Chelsea’s interests to make this a high-octane encounter.

For the creative Eden Hazard and Pedro to flourish, and to leave space for Diego Costa to run in behind, the Blues would prefer a fast-paced contest that gets stretched; much like their 3-1 success at Manchester City.

Antonio Conte’s team is blessed with great speed and athleticism, and the more physical this match becomes the more their super-mobile midfield duo of N’Golo Kante and Nemanja Matic will come to the fore.

However, I doubt Man Utd will allow that type of match to develop.

Aside from the closing stages of their early season derby against Manchester City, high-profile matches at Old Trafford have been played at a relatively low-tempo.

That has been deliberate.

Perhaps wary of the way they allowed Pep Guardiola’s side to cut loose back in September, Mourinho’s men have turned the subsequent contests into slower, less free-flowing matches.

This measured approach has in part nullified their opponents, but it has also affected their own ability to score.

United have failed to net more than once in all of their home matches against teams in the top seven. Three 1-1 draws, a 2-1 loss and a 1-0 win is United’s record.

In those stop-start affairs United have exceeded the 108km mark only once for distance covered.

Chelsea by comparison, have been involved in far more vibrant matches.

They have not always outworked their opponents on the road, but as shown in the table below, they are accustomed to highly physical tests. Their lowest output away to a member of the current top seven was 111.5km against Arsenal at Emirates Stadium.

The first goal is likely to decide which tempo we see.

If Chelsea score early and force United to take risks it could develop into the type of match the leaders want.

Should that not happen the hosts will likely do their utmost to slow the pattern of play.

I expect United to try and wear the Blues down, pushing them deeper in a scrappy war of attrition. It is a classic big-match Mourinho ploy.

The effectiveness of United's attack hinges on the selection or otherwise of Antonio Valencia.

The Ecuadorian played all 90 minutes of the Red Devils' 1-1 draw with Anderlecht in the UEFA Champions League quarter-final first leg on Thursday night, but having been rested for the last two league matches due to recent international exertions, only Mourinho knows whether he will save the 31-year-old for the second leg, or throw him into the fray at Old Trafford on Sunday.

Valencia's importance to the side cannot be overstated. Initially, there were reservations over whether he could be successfully converted from a winger into a top-class full-back, but his excellent performances in 2016/17 have put those concerns to bed.

His athleticism and end-product from wide areas is integral to the way Man Utd play.

Because he deploys forwards or attacking midfielders in wide areas, Mourinho relies on his full-backs to provide quality deliveries into the penalty area, and Valencia is United’s best crosser by some distance.

With a striker like Zlatan Ibrahimovic eager to feed off deliveries, Valencia’s supply line is an essential part of Mourinho's formula.

The South American has found the imposing striker with 16 crosses in the Premier League, double his next closest team-mate Wayne Rooney, and supplied three assists for him in all competitions.

United were poor in their 4-0 defeat at Stamford Bridge in October, but Valencia still shone brightly. Whipping 10 crosses into the box, five of which were successful, he was the outlet they looked to use most on the day.

If selected, Valencia will be a key man once again this weekend and Chelsea will need to try and stop that supply at source, or defend resolutely inside their box.

If not, the prolific Ibrahimovic will be denied the service of the best crosser in the Premier League.

Marcos Alonso and Victor Moses have been Chelsea’s surprise heroes, and they have a vital part to play at both ends of the pitch on Sunday.

Out of possession they will form part of a five-man rearguard and their primary task will be to defend sensibly.

That means stemming the tide of crosses the hosts will attempt to fling into their box, and trying not to be drawn infield when Man Utd’s wide forwards float towards the centre.

Mourinho’s men will want to drag the wing-backs away from the flanks.

But, with Kante and Matic capable of screening effectively and defenders Cesar Azpilicueta and Gary Cahill happy to squeeze up and engage those narrow wingers at appropriate moments, they should be able to stay put.

The ideal scenario for Chelsea would be having Alonso and Moses free to go 1v1 with United’s full-backs.

Whenever Chelsea spring turnovers you can expect their wing-backs to fly down the flanks.

By pushing on, Alonso and Moses will stretch the pitch and create the half-spaces in which Hazard and Pedro have thrived all season long.

This will ask questions of the United players, and if they fail to grasp a quick understanding of which player they need to mark then the leaders will punish any hesitation.

Alonso (17) and Moses (12) are Chelsea’s top two suppliers of accurate crosses that are not corners.

Man Utd's defensive record is exceptional, but it would not surprise me if Mourinho rejigged the shape of his rearguard for the visit of Chelsea.

He has experimented with a back three on occasions this term, including in the FA Cup tie at Stamford Bridge, and it is an option that will be under consideration. He may even revert to it mid-contest if necessary.

With the presence of a third central defender this would, in theory, allow one of the defenders to push up and get tight to Hazard and Pedro inside the pockets, without leaving themselves over-exposed behind.

This man-marking tactic would also take the pressure off their full-backs, leaving them to focus on duels with their opposite numbers instead.

I do expect both head coaches to make this a tactical affair. With so much at stake, each will focus on negating the other’s strengths.

Only three goals have been scored in this corresponding fixture across the last four seasons, and this may well prove to be another low-scoring encounter.

My suspicion is that one goal could win it.