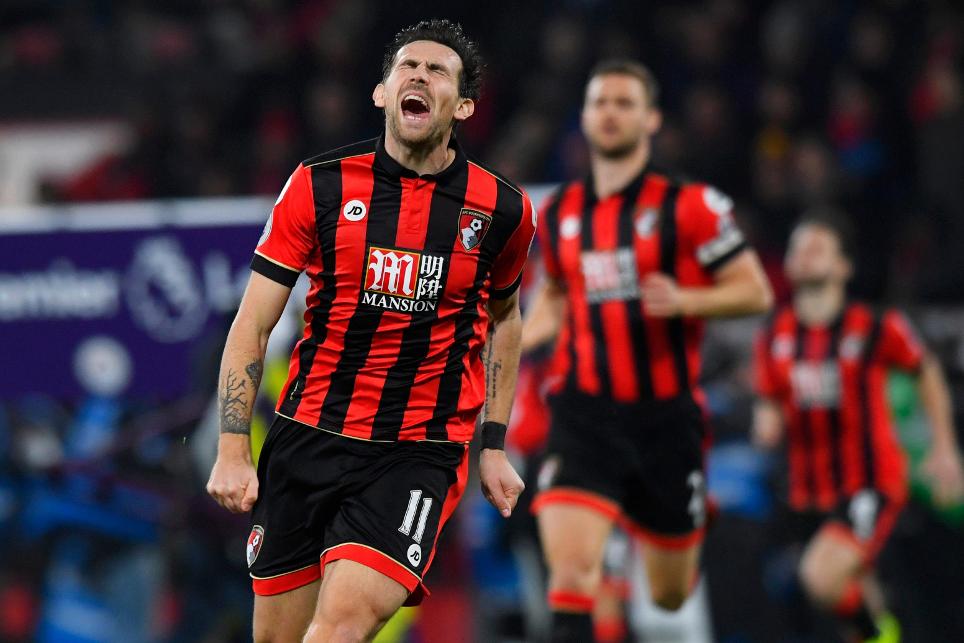 Ahead of facing West Ham, Adrian Clarke says midfielder's aggression is key to claiming a first win of 2017

AFC Bournemouth are still awaiting their first Premier League victory of 2017, despite battling to a point with 10 men at Old Trafford last weekend.

Adrian Clarke says a fast start will be key to them claiming victory at home to West Ham United on Saturday.

Andy Carroll will be a huge threat to AFC Bournemouth. Loose marking inside their own area, especially on crosses, has been a shortcoming all season.

In recent weeks the issue has worsened. Since beating Swansea City on New Year’s Eve the Cherries have conceded 21 goals in eight matches, with 13 coming from a cross.

Frustratingly for manager Eddie Howe, there is not one weakness he can address.

Goalkeeper Artur Boruc has made two errors at corners; defenders Steve Cook, Tyrone Mings and Simon Francis have all been deceived by good player movement or the flight of the ball; opponents have twice been left unmarked during the second phase of play after a set-piece; and full-backs have allowed opposing wingers to go past them to deliver too many crosses from advanced areas.

It has been a collection of mistakes.

Considering AFC Bournemouth have won the fewest aerial duels in the Premier League in 2016/17 (14.22 per match) and are the most likely team in the division to concede a headed goal, their marking needs to improve.

West Ham manager Slaven Bilic is sure to target this weakness.

What is the underlying issue?

You could point towards a lack of height. AFC Bournemouth do not have many tall midfield players or forwards to help with marking at dead-balls.

But a lack of consistency has also hurt them.

Ake has also been sorely missed since being recalled from his loan by Chelsea.

He scored two of the Cherries’ five headed goals this term and, in his eight starts, the side averaged 1.62 points per match.

His replacement, Mings, has collected 0.4 points per match from his five starts.

📰@HarryArter2 says the @ManUtd point can play a key role in the goal of survival.

With AFC Bournemouth’s current personnel, attack is the best form of defence.

After drawing 0-0 with Tottenham Hotspur at Vitality Stadium in October, Howe confirmed as much.

“We felt our best option was to try to stop the ball getting into the final third with our workrate and intensity,” he told afcb.co.uk. "The players delivered an incredible physical performance, full of endeavour and desire.”

This passionate approach has been prevalent in most of the team’s best displays.

When they start matches on the front foot, looking to dominate their opponent, AFC Bournemouth protect their own goal far more effectively.

With the exception of their 4-3 comeback win at home to Liverpool, the foundation of each PL triumph this season has been an assertive first-half performance.

By taking the fight to the opposition, playing at a fast tempo, and imposing their will on the other team, it eases the strain on their back four.

If they can push West Ham back early on this weekend, it could set up a victory to put distance between themselves and the bottom three.

AFC Bournemouth’s success is driven by a wholehearted team ethic. Producing a brand of energetic football, hard work is at the core of a side that relies on the collective, rather than star individuals.

That said, they do have four influencers who will be of importance until the end of the season: Harry Arter, Junior Stanislas, Joshua King and Jack Wilshere.

Arter likes to get forward, having the most shots on the team this season, but it is the abrasive side of the box-to-box midfielder's game that tends to spring the team into life.

When the 27-year-old is in the mood to get stuck in, it often has a very positive effect. In the five matches where he made his most tackles this season, AFC Bournemouth kept four clean sheets.

Off the ball there is perhaps an overreliance on Arter. He has made 43 successful tackles in 2016/17. The nearest Cherries central midfielder is Dan Gosling, on 25.

For the team to flourish consistently they would benefit greatly from the addition of a specialist ball-winner. Arter is expected to do a bit of everything.

Dropped from the side recently, Stanislas is another underrated player.

He has scored four goals and assisted five this season, and it is no coincidence he was part of six of their seven wins. When the winger features the Cherries average 1.4 points per match.

If they had averaged that over their 27 matches played AFC Bournemouth would sit ninth.

In the absence of injured Callum Wilson, King is another vital cog in the machine.

The forward’s pace stretches opponents' defences and his calm finishing - he has a 27% chance conversion rate - is bettered only by Ryan Fraser in the team.

King is also crucial to the way AFC Bournemouth retrieve possession. He is ranked third in the Premier League for "turnovers" with 73, behind Diego Costa (75) and Wilfried Zaha (76).

Wilshere is another who can help the Cherries enjoy a better conclusion to the campaign.

Capable of moving the ball beautifully, the Arsenal loanee has created 30 chances this term (the highest at the club) and is the leading candidate to unpick the lock of an opposing defence with a brilliant pass, or game-changing dribble.

If they can cut out individual mistakes and sloppy marking at the back, the Cherries should keep their distance from the relegation zone.

They have a consistent approach that suits the players at Howe's disposal, excellent runners with the ball (which has helped them earn seven penalties), and a genuine goal threat, home and away.

Setting a forceful tone at the start of matches is the key ingredient. When they do that, they look like a team who should be pushing for a top-half finish.