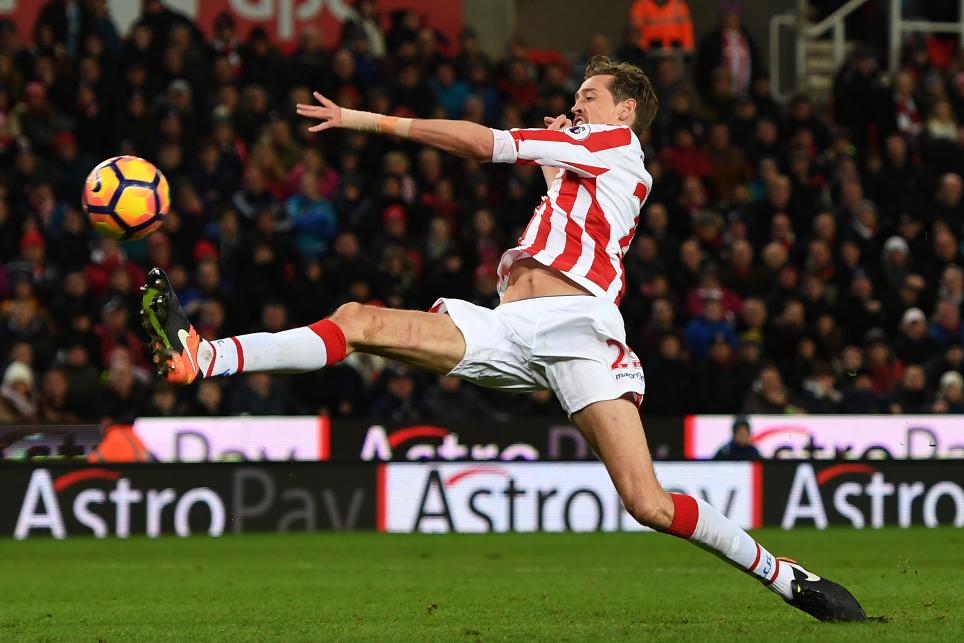 Having finished ninth in each of their last three Premier League campaigns, Stoke City are in that very position again ahead of Sunday’s trip to White Hart Lane.

Adrian Clarke analyses what Mark Hughes’ side need to do to upset Tottenham Hotspur and set their sights even higher this term.

Brought back in from the cold to start the last eight Premier League matches, Peter Crouch has transformed himself from a peripheral figure to a pivotal presence in the Stoke side.

In addition to the four goals he has scored since Christmas – including his 100th top-flight strike at home to Everton – the 6ft 7in striker has lifted Stoke with his array of footballing attributes.

Perhaps Crouch's most underrated quality is his exceptionally high workrate.

His long legs cover more ground per 90 minutes than any other team-mate, which is no small feat for a 36-year-old.

Showing for the ball as a matter of course, dragging central defenders short and from side to side, Crouch outran every other Stoke player in his last two home outings against Crystal Palace and Everton, registering distances of 12.29km and 11.94km.

When you consider that Wilfried Bony has averaged 8.89km per 90 in a Stoke shirt (the lowest of any outfield Potters player), the impact Crouch has made is oustanding.

People rarely talk about his effort levels but there is a strong argument to suggest Crouch could be the hardest-working centre-forward in the division.

In terms of the ground he covers per match he is second only to Swansea City’s Borja Baston, but 10 of the Spaniard’s 14 PL appearances have been off the bench, and it is easier to run around vigorously for shorter periods.

Crouch's imposing presence has also improved Stoke’s aerial threat. The former England international has not started the majority of contests this term yet is still ranked 5th for most aerial duels won.

Winning 126 headers in total, Crouch has been successful in the air on average every seven minutes.

Providing a target for the goalkeeper, defenders and midfielders to hit, the striker has been a quality outlet in recent matches, as well as an asset in both penalty boxes. His former club Spurs will be wary of the threat he poses at White Hart Lane.

With Crouch spearheading the attack midfielders have had greater confidence to make forward bursts. Since the turn of the year, Stoke’s players have increasingly made purposeful runs from deep.

While there is never a guarantee your front-man will be able to flick the ball on, or hold it up for a supporting team-mate, footballers are more inclined to gamble when there is a quality target man up top.

When the ball is in flight, the Potters now believe it is worth the effort to join in.

Hughes's players are not just making runs beyond opposition defenders to link with Crouch either.

Three excellently constructed goals have been scored in their last five PL encounters thanks to long passes played over the top for midfielders or wide men to chase:

● Charlie Adam’s 50-yard ball over the top released the Austrian winger to cross for Crouch to score at home to Everton (see below).

● Ramadan Sobhi’s clever, angled run from an Arnautovic pass paved the way for Joe Allen to grab the winner against Crystal Palace.

Adam with 135, and Glenn Whelan with 110 are in the Premier League’s top 20 for chipped passes, so whenever a Stoke player shapes to hit a long forward pass on Sunday afternoon Spurs will need to concentrate and track runners.

It will be of slight concern for the visitors that they have failed to beat any of the teams above them in the Premier League. Indeed, the highest-placed side they have overcome are 12th-placed Burnley.

In high-profile away fixtures, Hughes has tried to be positive in his tactical approach, throwing men forward whenever opportunities have presented themselves.

However, results have not gone their way. Losing 3-1 at Arsenal, 4-1 at Liverpool and 4-2 at Chelsea within the last two months, their fairly expansive style of football has left Stoke too open.

Isolated at times, Stoke’s defenders have been guilty of individual mistakes in matches against the stronger sides.

Will Hughes take a more pragmatic approach this weekend?

As the table shows, it has been too easy for the division’s best teams to create chances against Stoke, especially inside the 18-yard area.

Having dabbled with three at the back, Hughes has reverted to a regulation 4-2-3-1 of late, with a midfield trio of Whelan, Adam and Allen playing in front of the defence.

Allen has been pushed forward to act as a roaming No 10 but against Spurs it may be more prudent for him to form part of a more conservative three.

Facing a Spurs side who carved them open at will during a 4-0 loss back in September - Mauricio Pochettino’s men fashioned 14 shots inside their box - it is vital Stoke restrict the hosts to fewer chances inside the area.

To keep Harry Kane and Co quiet, a defensive, counter-attacking strategy may serve them in better stead.

They can hurt the Londoners in the air, or with balls sent over the top, but to stand a chance of winning the match, Stoke must concentrate harder on keeping Spurs at arm’s length.