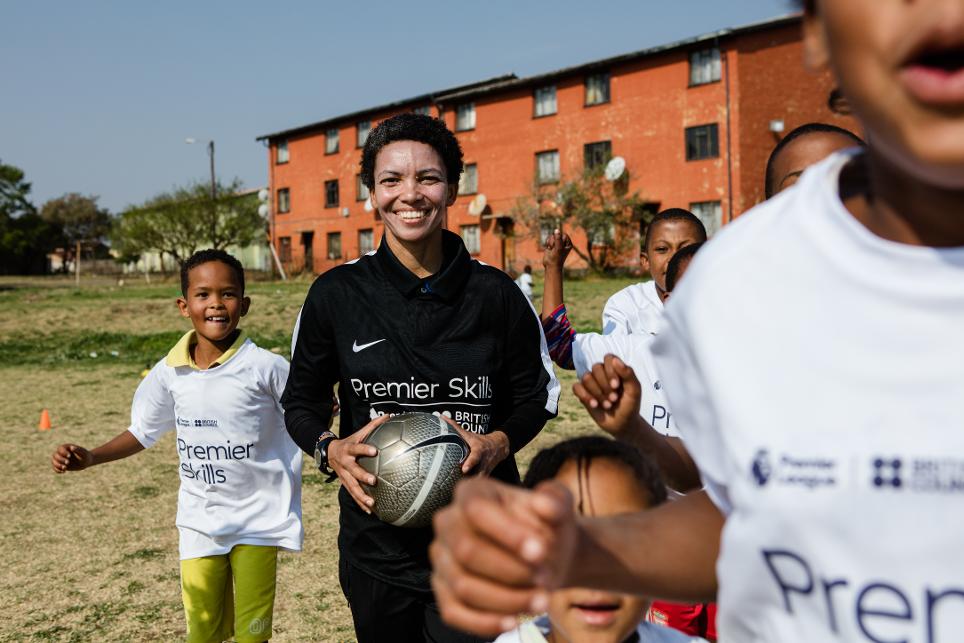 To mark 10 years of the Premier Skills project, we hear from one of the coaches who has been key to its success

Liezl Windvogel loved football; playing it with friends when not working for a corporate communications company in Johannesburg, South Africa.

But she never thought that her love for the beautiful game would give her a career that would tap into her desire to help communities in South Africa.

"Three years ago someone where I played asked me if I was interested in Premier Skills," she says. "I had never heard of Premier Skills, but I heard, 'football', 'coaching', and I signed up that day."

Three days later, after getting time off work, Liezl pitched up at the Nike Centre in Soweto to begin the first phase of the Premier Skills programme, where the Premier League and the British Council help develop community coaches around the world.

"I got there early and I was nervous because I did not know what to expect. I just came with the passion to play. I didn't have any knowledge, and I looked around and there were people who I had seen on television that I knew were coaches.

"But that week was amazing. I made notes, I got more information. At the start of the week I couldn't really have an opinion but as time went on, I would start to say things in the smaller group discussions."

Liezl passed the first part of the course and her application, enthusiasm and knowledge had caught the eye of the head coaches, who asked her to continue and gain more qualifications.

"I have always been shy and withdrawn and for them to recognise me, it really felt like I had something to give.

"There’s something that they saw within me that could benefit others. It warmed my heart. It gave me lot of confidence and that’s when I started thinking that this is the path for me."

Liezl took the opportunity with both hands.

She qualified as a coach educator and in 2015 left her job to start running her own Premier Skills courses, helping to teach other coaches to become coach educators themselves

"I have been blessed, it's been an amazing rollercoaster ride.

"If you have had known me five years ago, you wouldn't have said that I could speak in front of people, deliver workshops or give a speech.

"I was always at the back of the class and was quiet but now I am at the front of a classroom and people listen to me, which is humbling. It has changed my personality in a very good way.

"I can see myself in the coaches coming through. I see some shy people and I know I want to talk to them. You reach out to all sorts of people and that's the power of sport. It brings so many people together."

Premier Skills is celebrating its 10-year anniversary and Liezl was a special guest at a photo exhibition at the British Council that showcased the work the programme has carried out in 29 countries.

"Premier Skills is so much more than a programme that teaches community coaches about football; it also tackles social and personal issues,” she says. “I see a lot of example of social change because of Premier Skills.

There are kids that could be exposed to some bad influences but instead of being on street corners, they come to play football.

"The programme is a very selfless act and helps improve and develop the community."