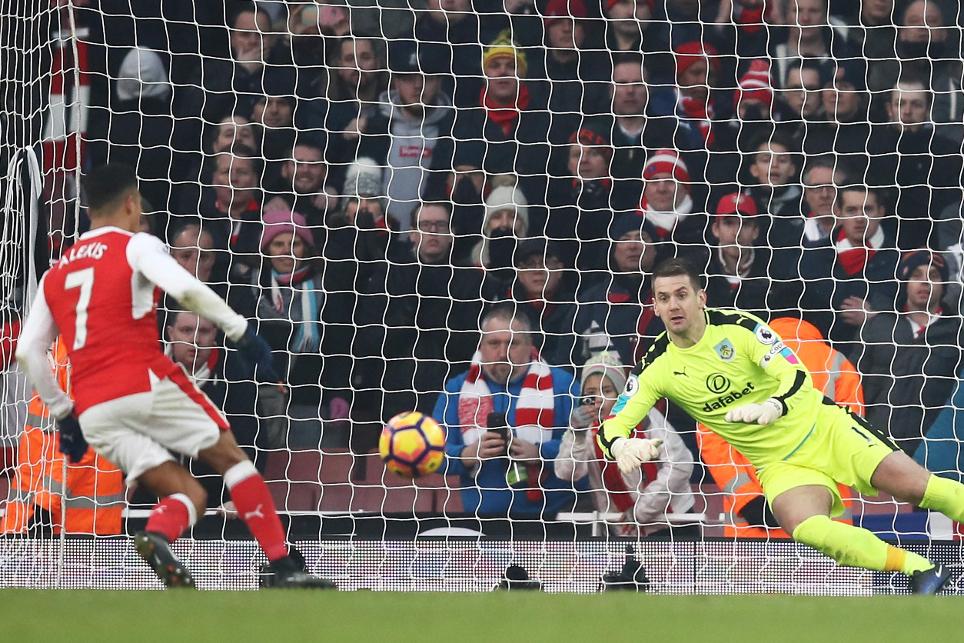 The two stoppage-time penalties that brought Arsenal v Burnley to an exciting conclusion last weekend characterised an increasing trend among spot-kicks in the Premier League.

Both penalties, by Burnley’s Andre Gray and then Arsenal’s Alexis Sanchez, were scored by being sent down the middle of the goal.

Players have been putting spot-kicks down the middle with an increasing frequency in recent years, research by Opta has shown.

It is an approach that appears to be paying off because goalkeepers in the Premier League appear reluctant to stand their ground at penalties.

Penalty distribution in the Premier League

Last season, of the 85 penalties that hit the target, a record 21, almost a quarter, were sent down the middle.

In past seasons this number has never exceeded 15, a figure already surpassed by the 17 after just 22 matches of 2016/17.

The figures also show that takers prefer to keep their penalties low, despite the lower rate of success (see graphic below).

Despite this trend, goalkeepers have been reluctant to stand still and not commit to going one side at spot-kicks.

Opta has found that in no season since 2010/11 have goalkeepers stayed upright at penalties on more than three occasions in total.

Of the 72 penalties taken in 2016/17 goalkeepers have not dived either way only twice.

This has meant the conversion rate of penalties down the middle compares well to going left or right.

Shay Given, the Stoke City goalkeeper, believes his counterparts look to commit to one side because if they do not, they have no time to react to the direction of the kick to save it.

“If you stand and wait till the penalty-taker strikes the ball, by the time you react, you have only probably a split-second to move and the ball is in the net,” Given said.

“So, nine times out of 10 the goalkeepers will pick a side.”

While the route down the middle of the goal is becoming a legitimate third way for penalty-takers, for Michael Owen it was usually a path of last resort.

“I must admit I went down the middle when I wasn’t that confident,” the former Liverpool, Newcastle United and Manchester United forward said.

“When I was confident I would back myself to hit in the corner but when the pressure’s on and when you’re not feeling that perfect sometimes, it’s just easier just to concentrate on your technique and hit it down the middle as hard as you can.”