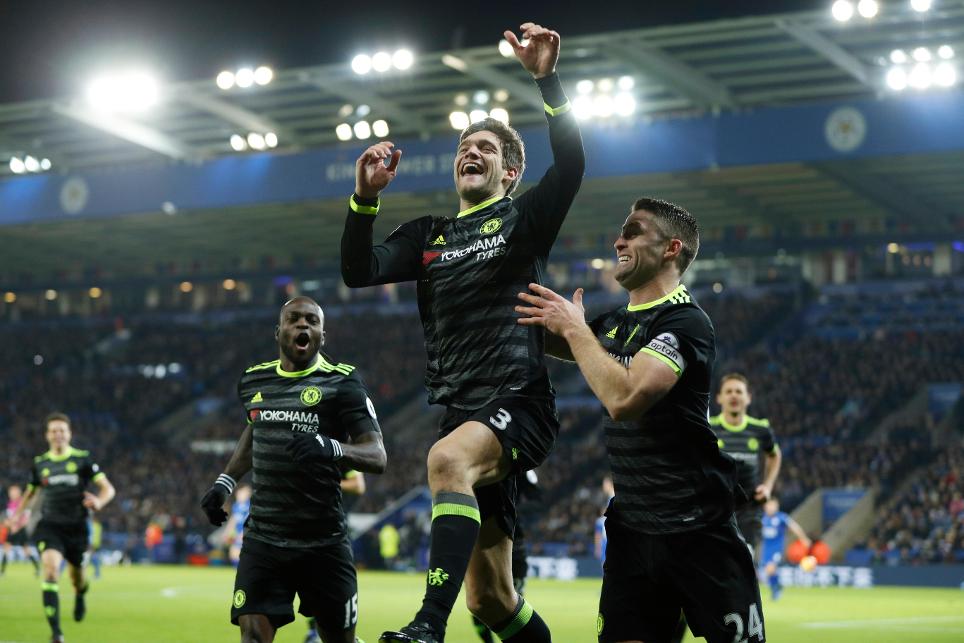 A 21-point haul at Leicester takes wing-back top of defender standings, ahead of two Chelsea team-mates

The Chelsea wing-back scored twice to register a tally of 53 in the Bonus Points System (BPS). He produced five clearances, blocks and interceptions (CBI), won two tackles and completed 79% of 65 attempted passes.

Netting the visitors’ third goal at the King Power Stadium, the Spaniard completed 95% of 41 attempted passes and two dribbles.

David Luiz (£6.2m) received a single bonus point thanks to a BPS tally of 28. The centre-back registered 11 CBI and five recoveries in addition to completing 81% of 51 attempted passes.

Two-goal Alonso topped the ICT Index with a score of 11.8, his highest total of the season.

The defender produced three attempts on goal, more than any player in the match, and was joint-top with Pedro for touches inside the box for Chelsea, with four.

Handed a "false-nine" role in the absence of Diego Costa (£10.4m), Hazard provided the assist for Alonso’s opener and created three scoring opportunities – more than any other player in the match.

Alonso’s double and subsequent 21-point return has taken him to the top of the FPL defender rankings, with more than 45,000 managers acquiring his services since Saturday's deadline.

Impressively, Alonso has registered a goal, assist or clean sheet in 13 of his 15 appearances since his first start in Gameweek 7.

The 33.6%-owned Hazard has scored only once from Gameweek 15 onwards, yet with concerns over the fitness of Costa for this weekend, he could continue in a central-attacking role for a home encounter with Hull City.

More than 403,000 FPL managers transferred out Costa last week and a further 139,000 have parted company following the weekend as concerns remain over his availability.

Elsewhere, Nathan Ake (£4.3m) failed to make the substitutes bench for Chelsea having been recalled from a loan spell at AFC Bournemouth; he has suffered more than 43,000 sales ahead of Gameweek 22.

Leicester City's FPL prospects remain unconvincing in both defence and attack ahead of a schedule in which four of their next five matches score at least three in the Fixture Difficulty Rankings (FDR).

Claudio Ranieri’s side continue to be without key attackers Riyad Mahrez (£9.0m) and Islam Slimani (£8.2m), who are currently representing Algeria in the Africa Cup of Nations.