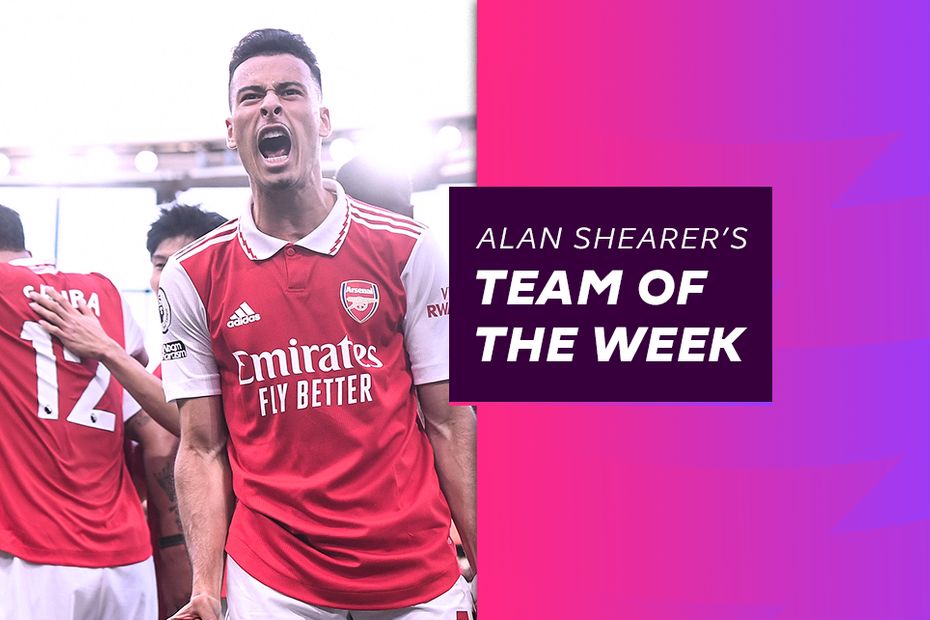 Martinelli – We need to keep our feet on the floor External Link
Owen: Arsenal are this season's best team after Man City
Hargreaves: Don't write off Ronaldo

Gabriel Martinelli was at his very best on Sunday, scoring an early opener and creating another goal in Arsenal's 3-2 victory over Liverpool.

The Brazilian has made a fine start to the season and was eye-catching yet again as he helped the Gunners reclaim top spot in the Premier League.

Alan Shearer, the Premier League's record goalscorer and a Hall of Fame inductee, was hugely impressed with Martinelli, one of three Arsenal players whom he has included in his Matchweek 10 Team of the Week.

Do you agree with @alanshearer's star players from Matchweek 10? ⭐️ pic.twitter.com/lUdz03yHjr

Hugo Lloris (TOT)
"In a match of fine margins, the captain made key saves as Spurs marked the death Gian Piero Ventrone with a win their late fitness coach would have been proud of."

Kieran Trippier (NEW)
"Another skipper who led by example, setting up the opening goal with a superb cross."

Joao Cancelo (MCI)
"Southampton’s attempt to stay narrow and compact gave the Portuguese space out wide and he used it brilliantly, getting a goal and assist."

Bruno Guimaraes (NEW)
"The Brazilian can do it all. Not content with running the match, he scored two brilliant goals."

Phil Foden (MCI)
"It takes some effort to match Erling Haaland for goals, but Foden has done just that over his last two matches, scoring again and adding an assist."

Lucas Paqueta (WHU)
"He was at the heart of everything good that West Ham United did, and set up their second goal."

Bukayo Saka (ARS)
"He timed his run brilliantly for his first goal and then withstood the pressure to convert his penalty and clinch a massive three points."

Cristiano Ronaldo (MUN)
"He needed just 15 minutes as a substitute to score his 700th club goal. His numbers are absolutely incredible."

Gabriel Martinelli (ARS)
"Liverpool couldn't handle his runs in behind, his quick feet or his vision. He fully deserved his goal and assist."

Manager: Mikel Arteta (ARS)
"An impressive win against Arsenal's bogey team to take them top of the league again."