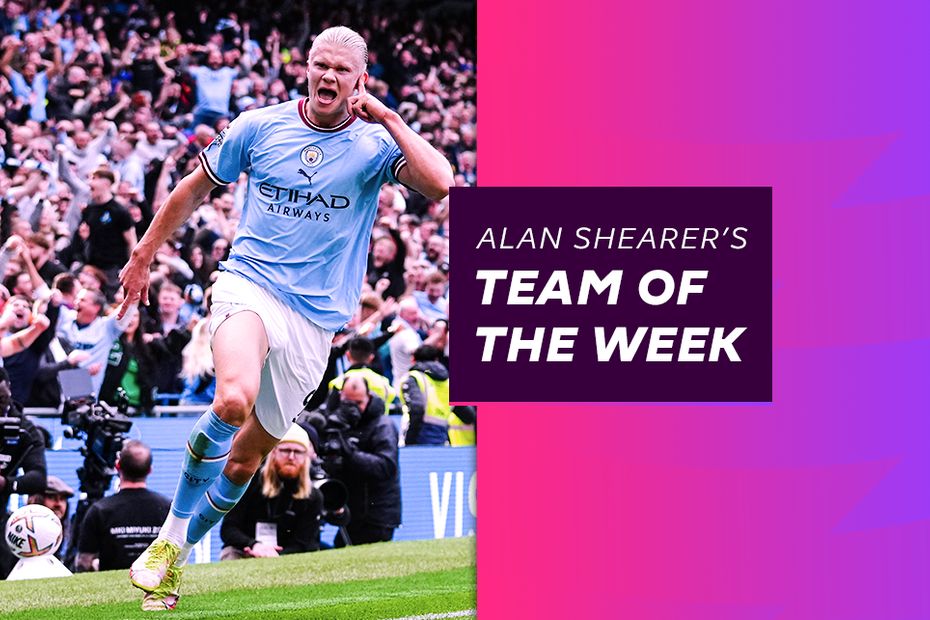 Haaland's phenomenal start to 2022/23 - 14 goals from eight matches - has already put the Man City striker on course to break Alan Shearer's Premier League record of goals in a season.

And all-time top goalscorer Shearer, who plundered 34 goals for Blackburn Rovers in 1994/95 to match the record set by Newcastle United's Andrew Cole the previous season, agrees his 27-year record is in doubt. "If he stays fit, he's breaking it!" he said.

Shearer has named Haaland alongside City team-mate Phil Foden in his Matchweek 9 Team of the Week.

🥁 Introducing @alanshearer's Team of the Week...

Jordan Pickford (EVE)
"He kept his team in it once again with some vital saves."

Ben White (ARS)
"Excellent at both ends of the pitch."

Conor Coady (EVE)
"Scored his first Everton goal in the win at Southampton and marshalled his defence expertly."

William Saliba (ARS)
"Superb at the back and nullified Spurs."

Thomas Partey (ARS)
"Struck a brilliant goal and was a dominant figure in the middle."

Erling Haaland (MCI)
"Another three goals. My record of 34 goals in a season is under serious threat. If he stays fit, he's breaking it!"

Miguel Almiron (NEW)
"Scored twice, including a Goal of the Season contender, and nearly netted a third. He was lively throughout."

Manager: Mikel Arteta (ARS)
"Arsenal bossed this derby and were comfortable winners. His tactics were spot on."