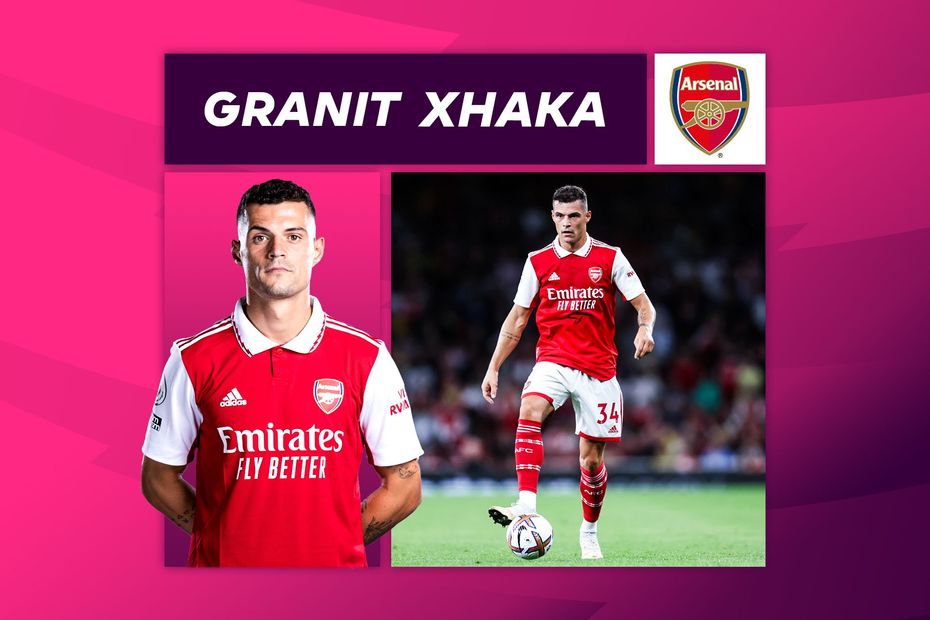 Xhaka has been a player transformed this season, thriving in a new attack-minded midfield role for Arsenal.

Playing in front and to the left of Thomas Partey, Xhaka has scored once and provided three assists already, producing the best football of his Gunners career.

Occupying half-spaces inside the final third to great effect and rotating positions seamlessly with Gabriel Martinelli and Oleksandr Zinchenko, Xhaka is enjoying a position that requires far less defensive responsibility.

Having won over Arsenal's fans, the 30-year-old is now setting his sights on inspiring a north London derby victory against Tottenham Hotspur.

Xhaka has always been an excellent, progressive passer, but now that Mikel Arteta has constructed a better platform behind him, he can use that skill-set higher up the pitch.

By inverting Zinchenko into a hybrid left-back/central midfield role, Xhaka no longer needs to concern himself with covering space or prompting attacks from deep.

That Monday morning feeling after a weekend win 🫶 pic.twitter.com/K2aFgRH9hY

The presence of Gabriel, William Saliba, Ben White, Partey and Zinchenko - all terrific forward passers in their own right - provides a license for him to perform with more freedom.

The rapport he has struck up with Martinelli has been tremendously exciting.

Playing in the Brazilian as often as possible (and more often than any other team-mate) Xhaka's influence has unquestionably helped the 21-year-old get off to a flyer this season.

Martinelli has scored three goals already and is Arsenal's most creative player, with 15 key passes in open play.

During the second half of 2021/22, Arteta began to use the Switzerland international in a more advanced role, but he looks far more comfortable there now.

Since last term, Xhaka's touches in the opposition area have increased 250 per cent, averaging 3.58 per 90 minutes, the fourth most of any Arsenal player.

That season, 24 different Arsenal team-mates enjoyed more touches per match inside the box.

His marauding runs have increased the unpredictability in Arsenal's attacks, and his rotational movement with team-mates has, at times, confused opponents.

When you compare Arsenal's 4-1-4-1 formation with Antonio Conte's preferred 3-4-3 set-up, situations could arise when Arsenal outnumber Spurs inside the midfield.

The Partey-Xhaka-Odegaard axis, supported by Zinchenko when he tucks in, has the potential to dominate.

In the past, Xhaka’s limited mobility exposed him in certain defensive situations.

Under pressure, he would make occasional mistakes or reckless decisions, creating a negative response among supporters.

While he still tracks back to help, he is getting more enjoyment from a role where he can express himself and use his best qualities.

Xhaka's performances have never been better received by the Arsenal fanbase, who acknowledge him to be a key man for them in this match and beyond.