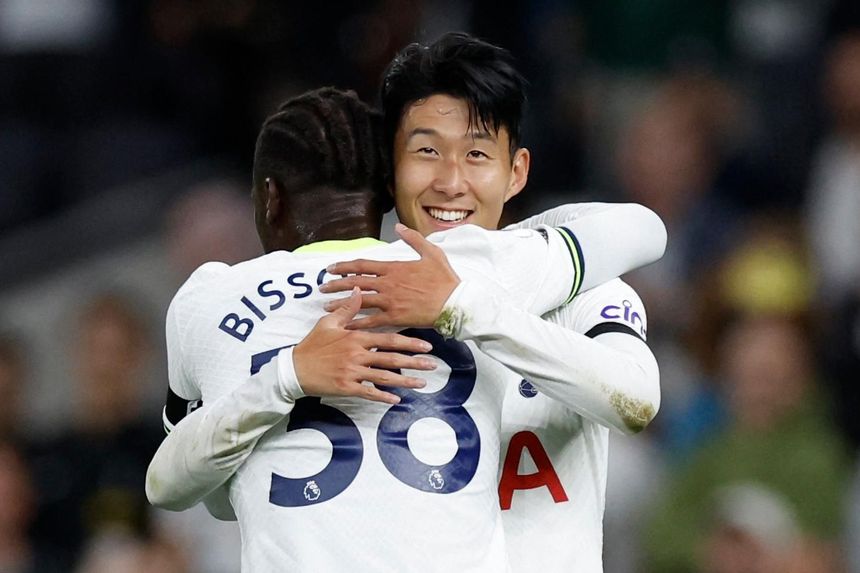 Sherwood: Son is a manager's dream

An incredible display from substitute Son Heung-min helped Tottenham Hotspur come from behind to defeat struggling Leicester City on Saturday, a result which moved them level on points with Manchester City at the top of the table.

Youri Tielemans had put the Foxes ahead on six minutes from the penalty spot but Spurs responded through headers from Harry Kane and Eric Dier.

James Maddison equalised just before the break only for Rodrigo Bentancur to put Spurs ahead again.

Son was introduced on the hour mark and claimed a 14-minute hat-trick, which included two fantastic goals to seal an impressive win as Premier League clubs, players, managers and fans continued to come together to give their respects to Her Majesty The Queen.

The South Korean is the first Spurs player to score a hat-trick in the Premier League as a substitute, and the first in the competition since Steven Naismith against Chelsea in September 2015.

Earlier in the day, Man City cruised past 10-man Wolverhampton Wanderers to also maintain their unbeaten start to the campaign.

Jack Grealish put City ahead in the first minute before Erling Haaland doubled the visitors' advantage with his 11th goal of the season.

Nathan Collins was dismissed for a dangerous challenge on Grealish in the 33rd minute before Phil Foden wrapped up the win in the second half.

City are on 17 points and sit in first place on goal difference ahead of second-placed Spurs.

Wolves drop to 16th with Leicester remaining bottom on one point from their opening seven matches.

Alexander Isak scored his first goal at St James' Park to rescue a point for Newcastle United against a spirited AFC Bournemouth.

Philip Billing poked home on 62 minutes to put the Cherries ahead but only five minutes later, Isak fired home from the penalty spot after Jefferson Lerma was adjudged to have handled inside the area.

AFC Bournemouth, unbeaten in three matches under Gary O'Neil, move up to 12th place on eight points, the same as Newcastle in 10th.

Can Arsenal go back top?

A win for Arsenal at Brentford will see the Gunners return to the top of the table.

The Bees, who are three matches unbeaten, will be hoping to repeat the result of the corresponding fixture last season when they defeated Arsenal in their first-ever Premier League contest.

In Sunday's other encounter, Everton will be hoping to earn their first victory of the season when they host West Ham United.