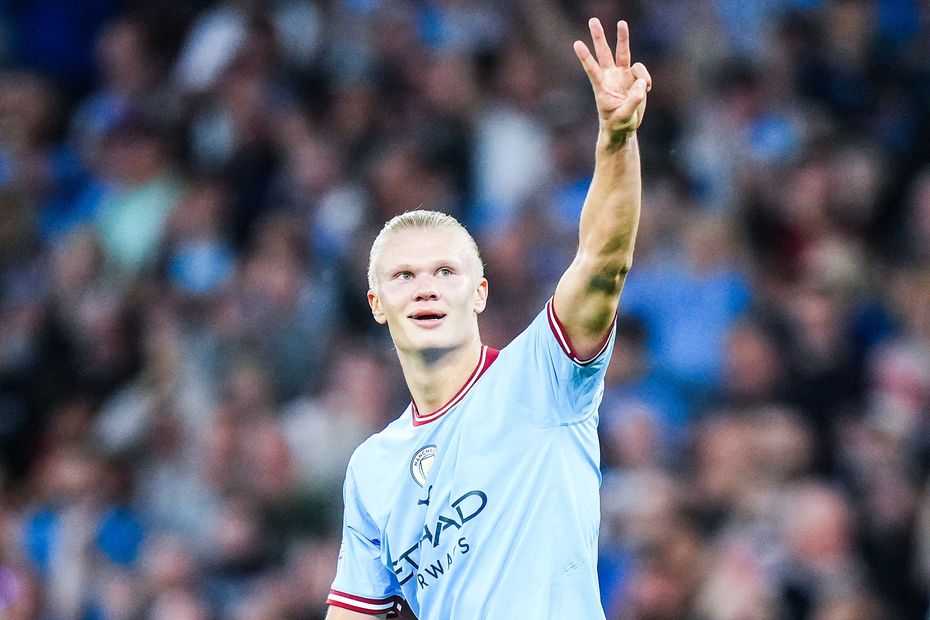 Guardiola: Haaland is inspired by titles rather than goals External Link

Erling Haaland made Premier League history on Wednesday when he scored a hat-trick in Manchester City's 6-0 win over Nottingham Forest.

Joao Cancelo added a stunning fourth, while Julian Alvarez scored his first two goals for the club as City remain second on 13 points.

The Gunners had to respond after substitute Douglas Luiz cancelled out Gabriel Jesus' opener with a second-half equaliser direct from a corner less than a minute after coming on.

The result makes it five wins from five since the start of the season for the Gunners, the first time they have achieved this feat since 2004/05, and keeps them two points clear at the top of the table.

Fabio Carvalho's goal in the eighth minute of stoppage time gave Liverpool a dramatic 2-1 win over Newcastle United at Anfield.

Alexander Isak marked his debut for the visitors with the opener, but Roberto Firmino equalised just after the hour, before Carvalho won it at the death to lift the Reds up to fifth place.

Tomas Soucek rescued a point for West Ham United as they drew their London derby with Tottenham Hotspur 1-1. Antonio Conte's side lie third with 11 points.

Elsewhere, AFC Bournemouth, playing their first match since the departure of head coach Scott Parker, stopped a run of three consecutive defeats, by sharing a goalless draw with Wolverhampton Wanderers.

Can Man Utd make it three in a row?

The final fixture of Matchweek 5 takes place on Thursday, as Manchester United travel to Leicester City.

Erik ten Hag's side can secure their third successive win following victories against Liverpool and Southampton.

Leicester, who are bottom of the table, will be aiming for a first league win of the season.