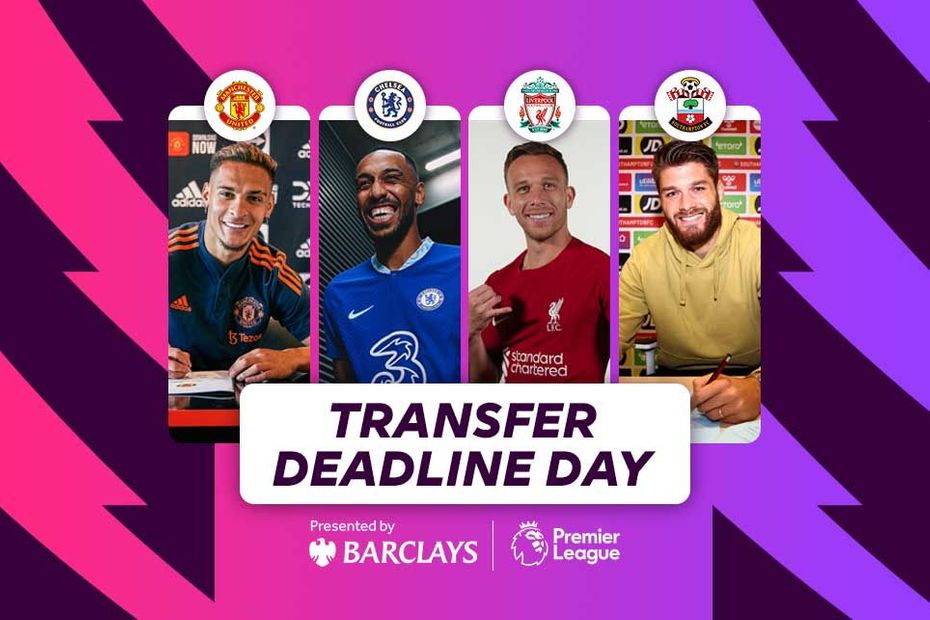 Find out all the confirmed deals by Premier League clubs, with the summer 2022 transfer window now closed.

See: All the summer's transfers

01:05 We're signing off now. It's been a busy Deadline Day and you can relive it all below. You can also see all the deals that have happened throughout the summer window, at every club, here.

01:00 Chelsea aren't done yet! The Blues have confirmed the signing of Swiss international midfielder Denis Zakaria from Juventus on loan for the remainder of the 2022/23 campaign, with an option of a permanent transfer at the end of the season.

00:20 This is the one you've been waiting for! Pierre-Emerick Aubameyang is now officially a Chelsea player, having sealed a move from Barcelona.

00:15 A significant late move by Brighton, who have completed a permanent deal for Chelsea midfielder Billy Gilmour.

00:10 After letting Daniel James go out on loan, Leeds have added forward Wilfried Gnonto to their squad, with the Italy international arriving on a permanent deal.

23:45 It's been a busy Deadline Day for Fulham, and they've now added Daniel James to their ranks, with the Wales international joining on loan from Leeds for the rest of the season.

23:40 Nottingham Forest have signed Blackpool winger Josh Bowler, although the 23-year-old will spend the remainder of the 2022/23 campaign on loan at Greek side Olympiacos.

23:30 Four deal sheets were submitted by Premier League clubs on time, ahead of prospective moves. Hold on, folks!

23:25 Wolves have made a late move, with Boubacar Traore arriving on a season-long loan from French side Metz.

23:10 Hector Bellerin's time at Arsenal has come to an end, with the full-back joining Barcelona on a permanent basis.

23:07 After letting Jan Bednarek leave, Southampton have brought in a centre-back, with Duje Caleta-Car joining from Marseille on a permanent deal.

23:05 The deadline has passed but we may not be done yet! A number of deal sheets have been submitted, giving clubs an extra two hours until 01:00 BST in which to submit the full paperwork to complete a transfer. Here's what a deal sheet looks like, below.

22:57 After two midfield arrivals on deadline day, Everton have allowed Andre Gomes to join Lille on loan for the rest of the 2022/23 season.

22:55 Aston Villa have moved to strengthen their defensive options with the arrival of Jan Bednarek from Southampton on a season-long loan.

22:45 Fulham have bolstered their attacking options with the arrival of former Spurs striker Carlos Vinicius on a permanent deal.

22:25 An outgoing at Newcastle, with Federico Fernandez moving to LaLiga side Elche on a permanent basis.

22:20 Southampton have made another signing, with Man City youngster Juan Larios joining on a permanent deal.

22:15 A significant incoming at Everton, who confirm the signing of midfielder James Garner from Man Utd.

22:05 Another Chelsea youngster is heading out on loan, with Harvey Vale linking up with Hull City for the remainder of the 2022/23 season.

22:00 This is the news Liverpool fans have been waiting for, with midfielder Arthur Melo arriving on a season-long loan from Juventus.

21:55 There's also another departure at St Mary's, with Southampton defender Yan Valery heading to Angers on a permanent deal.

21:30 Another signing at Southampton, with Samuel Edozie arriving from Man City on a permanent basis.

21:00 This time it's an incoming on the south coast, with Southampton signing Ainsley Maitland-Niles on a season-long loan from Arsenal.

20:35 Young Liverpool forward Max Woltman has joined Doncaster Rovers on loan for the rest of the season.

20:15 While Man Utd are in action against Leicester, the Red Devils have announced that midfielder Ethan Galbraith has joined Salford City on loan for the 2022/23 season.

20:05 Brighton have announced that forward Florin Andone has left the club after his contract was terminated by mutual consent.

20:00 A significant move between Midlands' rivals, with Belgium international Leander Dendoncker switching from Wolves to Aston Villa on a permanent deal.

19:45 More news from St Mary's, with Southampton goalkeeper Mateusz Lis off to French club Troyes for a season-long loan.

19:30 A loan move have has been confirmed for Newcastle defender Kell Watts, who will spend the 2022/23 season at Peterborough United.

19:05 Wolves defender Christian Marques will spend the 2022/23 campaign on loan at League One side Forest Green Rovers.

19:02 Wales international and Chelsea youngster Ethan Ampadu is heading to Italy on another season-long loan, this time to Serie A side Spezia.

18:00 There's another loan move to a Championship club, with Manchester City defender Luke Mbete linking up with Huddersfield for the 2022/23 season.

17:55 More business at Newcastle, as midfielder Matty Longstaff moves to League Two side Colchester United on loan until January.

17:35 This time it's a departure from Fulham, with goalkeeper Paulo Gazzaniga joining Girona on a season-long loan deal.

17:30 Another player has departed Newcastle United on loan, and this time it is Martin Dubravka, who has joined Manchester United for the 2022/23 season.

17:01 Newcastle United have confirmed that Lucas De Bolle has signed a new contract with the club, and joined Scottish Championship side Hamilton Academical on a season-long loan.

17:00 Willian has returned to the Premier League with Fulham, signing a one-year deal with the club. The Brazilian had previously spent time with Chelsea from 2013 to 2020 and Arsenal for one season in 2020/21.

16:50 Idrissa Gueye has rejoined Everton from Paris Saint-Germain on a two-year deal, having previously spent three years at Goodison Park from 2016 to 2019.

16:48 Fulham have added full-back Layvin Kurzawa to their side on a season-long loan deal from Paris Saint-Germain.

16:43 James Olayinka has bid farewell to Arsenal to join League One side Cheltenham Town in a permanent transfer.

15:13 Sylvester Jasper will leave Fulham’s Academy and spend the remainder of the season on loan at Bristol Rovers.

14:41 Down at St Mary's, Southampton defender Jack Stephens has completed a loan move to AFC Bournemouth.

14:37 Another Crystal Palace Academy player is on the move, this time striker Rob Street heads to Shrewsbury Town on loan.

13:47 Brentford striker Halil Dervisoglu has completed a move to Burnley on loan.

13:45 Defender Will Tizzard has left Southampton to join Chippenham Town on loan until January 2023.

13:04 Nott'm Forest have made their 20th signing of the summer. Wolves defender Willy Boly has joined on a two-year deal.

12:11 Leicester City have completed the signing of defender Wout Faes on a five-year deal.

11:01 Wolves goalkeeper Palmi Arinbjornsson has joined Norwegian side Skeid on loan until the end of the season.

10:32 Oriol Romeu has ended a seven-year spell at Southampton and moved to Girona on a permanent deal.

09:58 Man City confirm the signing of centre-back Manuel Akanji from Borussia Dortmund on a five-year deal.

09:45 Antony completes a move to Man Utd from Ajax, signing a deal until 2027 with an additional one-year option.

09:41 Leicester City forward George Hirst has signed a new deal ahead of a season-long loan move to Blackburn Rovers.

09:38 Liverpool's 21-year-old forward Paul Glatzel has joined Tranmere on loan until the end of the season.

09:25 Nineteen-year-old defender Idris Odutayo has moved from Fulham to Maidenhead on a season-long loan.

09:05 Edon Pruti has joined Brentford on a one-year contract from Slough.