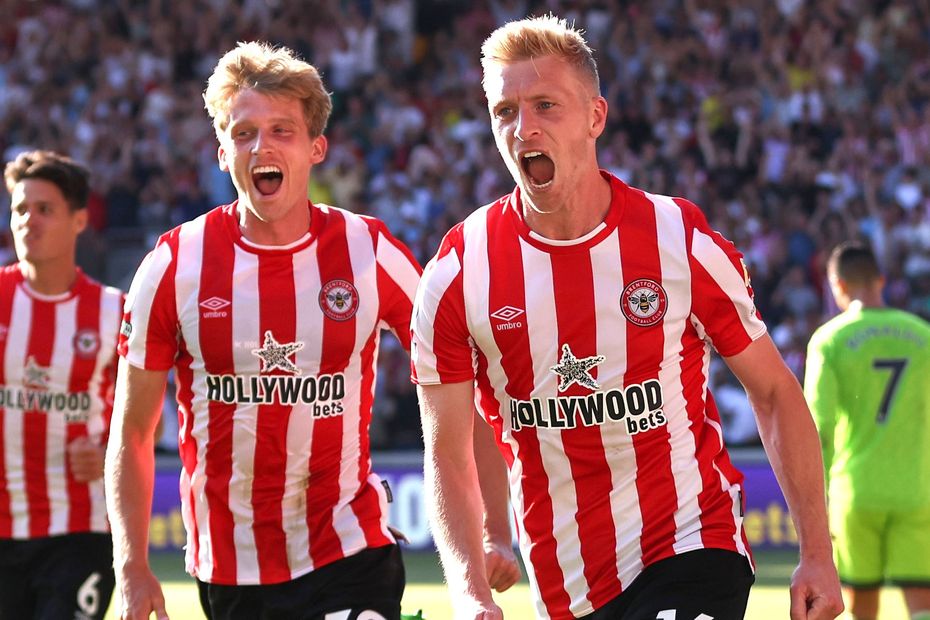 Josh Dasilva's 10th-minute shot from the edge of the area squirmed through David De Gea's grasp and trickled over the line.

Brentford added a second eight minutes later, as Mathias Jensen capitalised on another defensive mistake by United to fire into the bottom corner.

Ben Mee headed in to make it 3-0 on the half-hour, before Bryan Mbeumo finished following a quick counter-attack to earn Brentford their first-ever top-flight win over the Red Devils.

In fact, it was Brentford's first victory over Man Utd in any competition since a 2-0 FA Cup win in February 1938.

It also means Man Utd have lost their opening two Premier League fixtures for the first time since the 1992/93 campaign.

Gabriel Jesus marked his home debut for Arsenal with his first two goals for the club in a 4-2 success over Leicester City.

His brace gave the Gunners a two-goal lead heading into the break, before Leicester hit back when William Saliba headed into his own net.

Granit Xhaka and James Maddison exchanged strikes to ensure a tense finish, which was settled by a Gabriel Martinelli goal for the second match running, to make it two wins from two.

Elsewhere, Manchester City also made it back-to-back Premier League victories with a 4-0 win against AFC Bournemouth at the Etihad Stadium.

Ilkay Gundogan, Kevin De Bruyne and Phil Foden netted for the champions in the first half and an own goal by Jefferson Lerma completed the scoring with 11 minutes remaining.

A late strike from Kyle Walker-Peters helped Southampton come from two goals down to claim a 2-2 draw at home to Leeds United.

Aleksandar Mitrovic had his penalty saved as Fulham were held to a goalless draw at Wolverhampton Wanderers, while Brighton & Hove Albion's match with Newcastle United finished by the same scoreline.

Later in the day, Chelsea face Tottenham Hotspur in a huge London derby at Stamford Bridge.

Several summer signings will hope to make their home debut for the Blues, including Raheem Sterling and Kalidou Koulibaly.