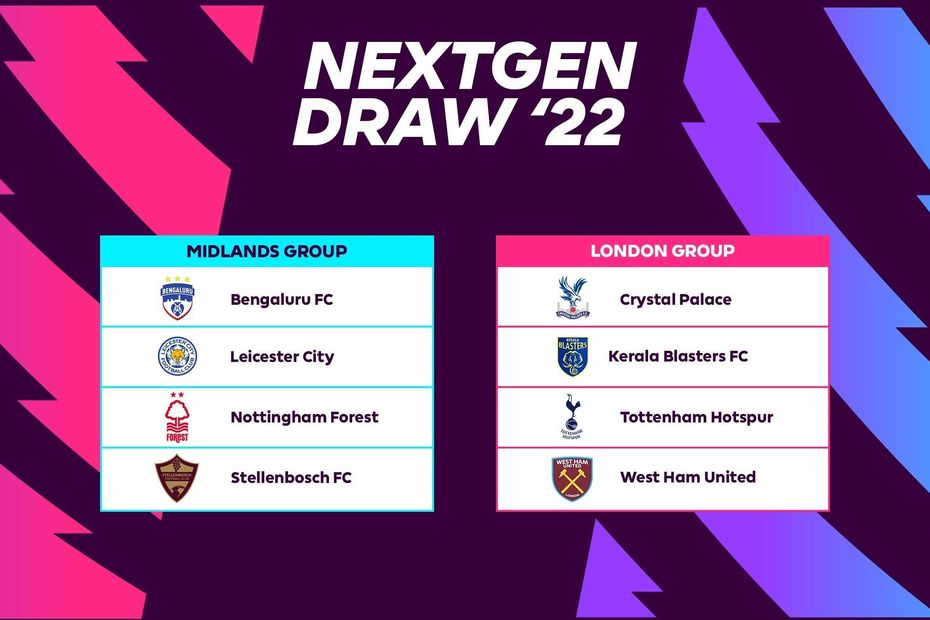 Riley inspired by trip to Mumbai with Chelsea U14s
Shearer: The quality of football in India is only getting better
Rising talents shine on Indian stage

The Premier League is continuing its support for the development of the game around the world by hosting teams from India and South Africa in the Next Generation Cup 2022.

The eight-team tournament, part of the longstanding partnership between the Premier League and Football Sports Development Limited (FSDL), will feature five Premier League youth teams, one South Africa academy side and two from India.

The teams will be divided into two groups, based at the Tottenham Hotspur and Leicester City training grounds, with the first matches taking place on 27 July.

"The Premier League and our clubs look forward to welcoming players from Bengaluru FC and the Kerala Blasters FC for the Next Generation Cup, the first time the youth development tournament has been held in the UK," said Premier League Chief Executive Richard Masters.

"This event builds on our continued work with the Hero Indian Super League, to support the development and growth of football in India.

"It also provides a brilliant opportunity for young players from the Leagues to meet and compete against each other, learn about each other’s cultures and develop both on and off the pitch.

"I hope everyone taking part in the Cup at Leicester City and Tottenham Hotspur's first-team training facilities enjoys their experience and benefits from their involvement."

WOW! 🤩 The Blue Colts had the once in a lifetime opportunity of interacting with Premier League legends Jermain Defoe and Wes Morgan, who handed them pointers on how to make a successful career in the game. 🔥#WeAreBFC #PLNextGen pic.twitter.com/vstTNngFQ2

Matches involving Bengaluru FC and Kerala Blasters FC will be live-streamed on the social media accounts of the two clubs as well as the ISL.

"It gives us immense pleasure to see young Indian footballers gain international exposure and take their game to the next level," said a FSDL spokesperson. "This will surely empower the emerging players to evolve as better footballers and lead the growth of football in the country.

Rubbing shoulders with some of the best in the business 💪🏽

Here's what went down when our Youth Team visited the Premier League HQ! 📸

"India has immense potential for football and we at FSDL strive to constantly strengthen the sport to establish the country as a global football powerhouse. We wish our players all the best for the tournament and hope this serves as a great learning experience for them."

As well as giving the young Indian and South Africa footballers the chance to play in the UK against English academy teams, the Premier League and its clubs will also provide knowledge-sharing workshops.

This comes as result of an extensive period of collaboration which has also seen PGMOL deliver a number of referee development courses in India as part of the Premier League’s Premier Skills programme and wide-ranging support for match officials, their coaches and observers.

Ready for another edition? 👊

A look back at how the #PL has been working closely
with the @IndSuperLeague in helping develop football in India 🤝#PLNextGen pic.twitter.com/l0MSrb9Pbe

"We've enjoyed a beneficial and productive partnership with the Hero Indian Super League and the AIFF for a number of years now, with a strong focus on coaching and training their match officials both on and off the field," said PGMOL Managing Director Mike Riley.

"There's been some fantastic progress made during that time and it is a pleasure to see that continue as we welcome four talented referees to the Next Generation Cup. I hope that they enjoy the experience and benefit from what promises to be a great tournament."

Through the partnership, which began eight years ago, the Premier League and FSDL have continued to work together to share knowledge and expertise in all areas of the game including governance, talent development, commercial growth, administration and wider community development.

Most recently, the two leagues have collaborated in the holistic development of the sport in India, focused on enhancing coaching and refereeing standards in the country.