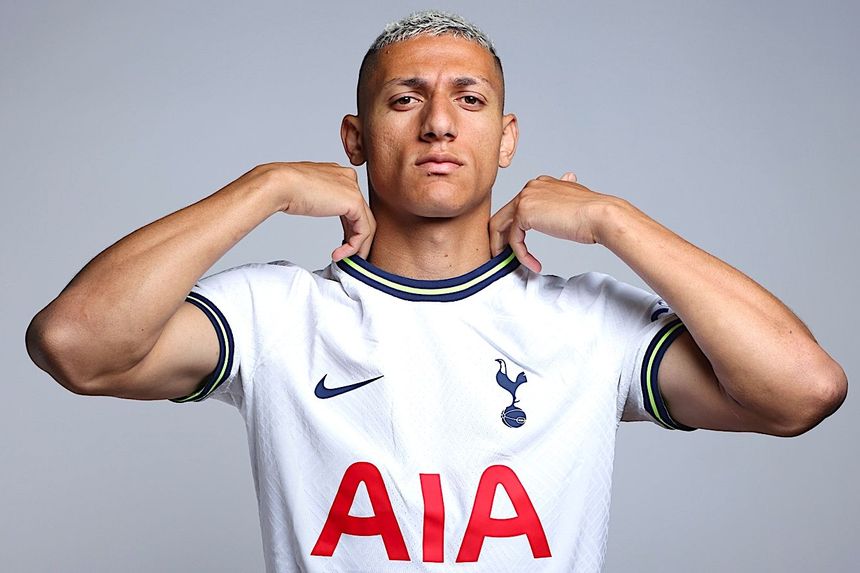 Antonio Conte’s acquisition of Richarlison will offer him the opportunity to rest and rotate Tottenham Hotspur’s forward line without weakening it in 2022/23.

The Brazilian has strong pedigree at the highest level, reaching double figures for Premier League goals in three of his four seasons with Everton.

In addition to providing competition for places, he also offers tactical flexibility to the Spurs head coach.

Richarlison played as a striker in 51 per cent of his matches at Everton. But he also occupied a left-sided forward role in a further 27 per cent, and was a right-sided forward in 14 per cent.

Spurs' new boy is good enough to deliver effective performances out wide or down the middle this season.

Effective in front of goal

Richarlison is predominantly right-footed but has consistently shown he is capable of scoring in a variety of ways.

During his four-year spell at Goodison Park the South American star regularly chipped in with headed goals, or finishes with his weaker left foot.

From an aerial perspective Richarlison’s arrival should make a tremendous difference.

Richarlison has always been outstanding at attacking crosses with his head, so there will be extra encouragement for Spurs' wing-backs to supply a stream of deliveries into the box.

🎙 “I always said it was my dream to play in the Champions League, now this dream will come true”

When Richarlison plays as a striker instead of Kane, the team will not lose an aerial presence.

If he occupies a wide berth in the same side as the England captain, he will be a major threat at the far post, too.

Fellow newcomer Ivan Perisic is a terrific crosser, and the Croat would love to have twin targets to aim at when he sends the ball into the box.

Spurs were not recognised as a pressing side last season but Richarlison, who loves to close defenders down, will play a part in helping them earn turnovers in good areas.

He made a goal for himself in a 1-0 win at home to Chelsea last season, dispossessing Cesar Azpilicueta before scoring the winner.

And overall, Richarlison won possession inside the final third on 24 occasions last season, more than any of his new team-mates were able to achieve.

In terms of pressures inside the attacking and middle thirds per 90 minutes, only two other Premier League forwards or attacking midfielders made more than the 38.2 averaged by Richarlison.

Drawing fouls from the opposition

Embracing the physicality of Premier League football, and always willing to run with the ball at his feet, Richarlison also draws a lot of fouls.

Ivan Toney and Wilfried Zaha were the only individuals fouled inside the final third with more regularity than Richarlison.

Most fouls won in final third

Kane and Lucas were both a long way off that last term, with 11 each.

So, Richarlison's introduction to the side has potential to help Conte’s men win many more free-kicks and penalties.

Richarlison is not a prolific Premier League goalscorer, but he will bring added value to Spurs whenever he is selected to play.

Fitting in with Conte’s physical demands may take time, but he has the talent to deliver moments of inspiration.

The 25-year-old scored with an acrobatic overhead kick at Norwich City last term, a diving header against Watford, and netted a crucial 75th-minute equaliser against Crystal Palace in a match that guaranteed Everton's top-flight safety.

His signing adds much-needed depth to the Spurs forward line.