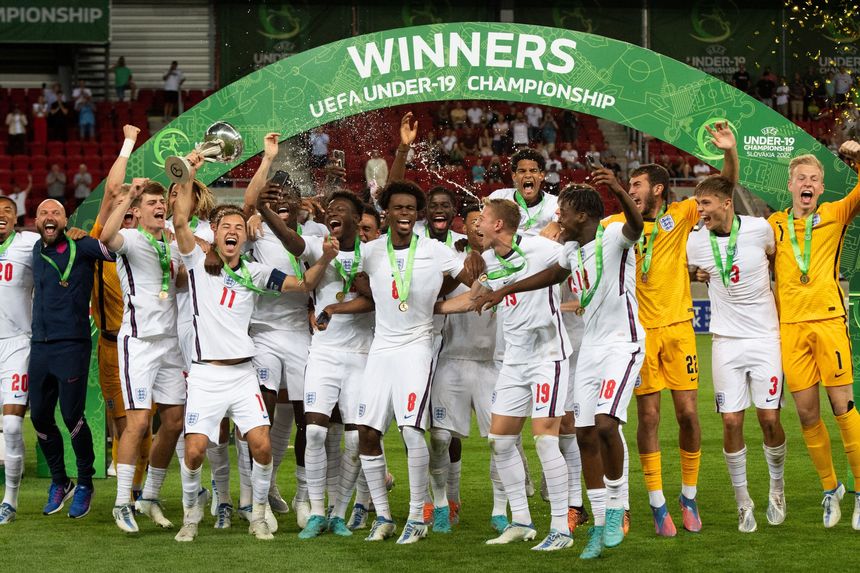 England fought from a goal down to beat Israel 3-1 and win the UEFA Euro Under-19 Championship in Slovakia.

After coming from behind to beat Italy 2-1 in Tuesday’s semi-final, the Three Lions showed outstanding character again recover from a losing position.

Manchester City's Callum Doyle got England back on level terms early in the second half after trailing 1-0 at half-time, and after no further goals in normal time, goals from Aston Villa duo Carney Chukwuemeka and Aaron Ramsey in extra-time sealed the victory for Ian Foster's men.

Twenty players in the England squad have come through Premier League academies and Foster praised the clubs' role in his team's development.

"We’ve very blessed as a nation with our academies," Foster said. "When they come into the England pathway they are technically outstanding.

The U19s' success follows other triumphs from past England youth sides.

In 2017, the U20s secured the FIFA World Cup beating Venezuela, and later that year the U17s won their version, beating Spain 5-2, with Man City star Phil Foden scoring twice on that occasion.

This year's U19s replicated the class of 2017 in winning the Euros.

"It is incredibly exciting to see our young players performing on the international stage and credit must go to Ian Foster, his coaching team and The Football Association.

"We are proud to see many of the talented prospects from our clubs succeeding at the highest level and collecting another major trophy for England’s youth teams."