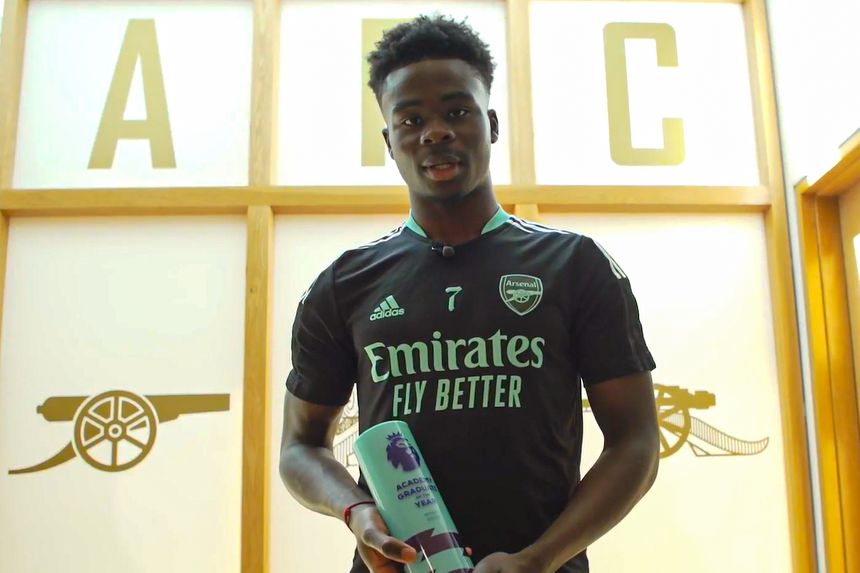 At the Premier League Youth Development conference, players, coaches and former athletes were honoured for their achievements and the impact they have had at football academies.

This accolade went to Arsenal midfielder Bukayo Saka, who becomes the latest in a line of talented youngsters to claim the award created to recognise Academy players who have made the successful transition from Academy to the Premier League.

These are players who not only excel with their on-pitch performances, but also act as inspirational role models for future generations of Premier League players to come.

Saka was chosen by a select Premier League panel.

He follows in the footsteps of previous winners such as Marcus Rashford, Trent Alexander-Arnold and Mason Mount last year; all incredible young men as well as being exceptional footballers.

"I am really proud to win this, and I hope this inspires a lot of players coming through the academy that can achieve this as well, so thank you everyone," Saka said.

This award is named after the late Reading youth coach and is in recognition of exceptional individuals in Academies who continue to be role models for others and are creative and innovative in their practice.

Like Eammon, these winners believe in the aspiration of a world-leading coaching workforce and a system built on achieving success together.

The Leicester City director of football, Rudkin was appointed by the club as Academy manager in 2003 and helped produce talents such as Emile Heskey.

He has also overseen development of other players such as Andy King and Jeffrey Schlupp, two players who famously helped the Foxes win the Premier League title in 2015/16.

In December 2014, Rudkin replaced Terry Gibson as Director of Football.

Allpress is currently Tottenham Hotspur's head of academy coach development, but has spent time in a variety of roles in the past in developing young players; particularly at the Football Association, where he spent 13 years working as the development coach.

Goater was deservedly rewarded for his work as U11 head coach and lead coach for U9 to U11.

He has been at Arsenal since 2019, where before that, he was Reading's head of academy player development for 11 years.

This award has been created to recognise former players, who have achieved success in a chosen career outside football following graduation from the Academy and celebrates the important role that Academies play in the development of people and positive role models.

That can be through developing elite professional footballers playing at the top of the game, or other Academy graduates who have gone on to achieve success in alternative professions.

Shannon progressed through the age groups at Everton as a midfield player, achieving a scholarship in 2012.

Unable to achieve a professional contract, Ollie turned his attention to playing and studying in the United States, taking up the offer of a scholarship with Clemson University in South Carolina.

He left Clemson with a degree in Sports Communication & Business and began a career in the sports industry with Team INEOS, before returning to Everton as their international development coordinator.

Paratore moved to the United Kingdom from Australia at 14, joining the Leicester City Academy where he graduated to play in Premier League 2.

Upon leaving the club, Robbie mixed playing non-league football with a degree in law and is now working for international commercial law firm, Ashurst.