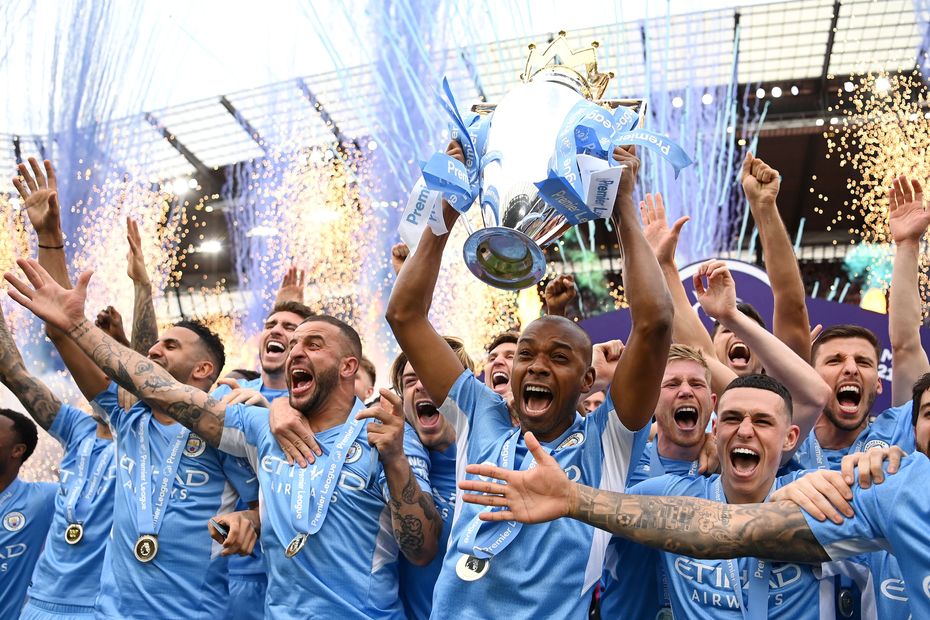 Manchester City staged a dramatic fightback to claim a sixth Premier League title, scoring three times in less than six minutes to turn around their match at home to Aston Villa.

City went 2-0 down through goals from Matty Cash and Philippe Coutinho and the home fans were fearful of the title slipping through their hands.

Liverpool at that stage were still behind them in the table, drawing 1-1 with Wolverhampton Wanderers after conceding a third-minute goal to Pedro Neto, before Sadio Mane levelled on 24 minutes.

Another Liverpool goal would have lifted them into top spot and handed them the trophy.

But, in similar fashion to City's first title when they trailed to Queens Park Rangers at home on the final day, City were to stage a brilliant comeback.

Two goals from substitute Ilkay Gundogan and another from Rodri, all inside five minutes and 36 seconds, turned the match on its head, and made Liverpool's eventual 3-1 victory academic.

At the other end of the table, it was just as dramatic as Burnley and Leeds United fought to the final minute to stay in the league.

Burnley went 2-0 down at home to Newcastle United, which meant that Leeds would stay up if they avoided defeat at Brentford.

They went ahead through Raphinha's penalty but then Sergi Canos equalised for Brentford.

Maxwel Cornet pulled one back for Burnley to give them hope of another goal and safety.

But Jack Harrison struck in stoppage time to seal victory for Leeds and end the Clarets' six-year stay in the competition.

Leeds became the first team since Wigan Athletic 11 years ago to climb out of the relegation zone on the final day to secure safety.

In the race for fourth place and a spot in the UEFA Champions League next season, there was less drama, but no lack of goals.

Tottenham Hotspur were not troubled at Norwich City as they eased to a 5-0 win over the relegated club.

Son Heung-min scored twice to take his total to 23 goals this season and claim a share of the Golden Boot with Mohamed Salah, who was also on the scoresheet at Anfield, after coming off the bench.

Spurs' win meant that Arsenal's 5-1 victory at home to Everton was not enough to leapfrog their north London rivals and they will play in the UEFA Europa League next season.

That is also the case for Manchester United despite them losing 1-0 at Crystal Palace.

A 3-1 defeat for West Ham United at Brighton & Hove Albion denied the Hammers a chance to profit from Man Utd's defeat and climb above them into sixth.

Instead West Ham will be in the 2022/23 UEFA Europa Conference League.

In the other individual honours, Liverpool goalkeeper Alisson and his Brazilian compatriot and Man City counterpart Ederson shared the Golden Glove on 20 clean sheets.

Salah emulated Harry Kane of last year in claiming the Playmaker of the Season award as well as the Golden Boot, his 13 assists proving unsurpassable.

More assists than anyone else in the #PL!@MoSalah is 2021/22's Castrol Playmaker of the Season ✨ pic.twitter.com/CmPvgMKDW3

As the dust settles on an enthralling 2021/22 Premier League, thoughts will soon move towards the next campaign.

The fixtures for the 2022/23 Premier League are released on 16 June, just 25 days away, ahead of the season starting on 6 August, a mere 76 days from the end of this campaign.