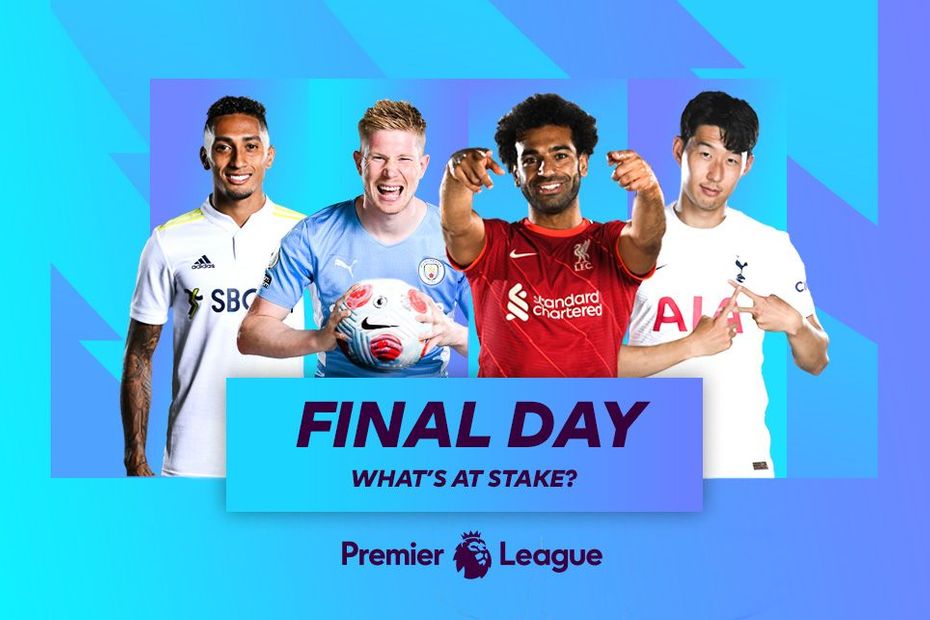 Final-day preview: All you need to know
What's happened when title races have gone to the wire?
Iconic title-winning goals in PL history

An exciting Premier League season like no other is set for an enthralling finale. Fans will not know where to turn on Sunday with so much at stake throughout the table.

After 370 matches there is still so much to play for. Of the 10 fixtures, eight have implications for the title, for qualification for UEFA competitions next season, and for a club's Premier League status in 2022/23.

It's the first time a Premier League season has reached its final day with so many elements undecided.

After Liverpool's 2-1 win at Southampton on Tuesday moved them to a point behind Manchester City, the champions know anything less than three points at home to Aston Villa could end their defence of the Premier League title.

Standing in their way is Liverpool legend and now Villa head coach Steven Gerrard, who never managed to claim a Premier League title while at Anfield, but could help deliver a second to his former club.

Jurgen Klopp's team will welcome Wolverhampton Wanderers at Anfield on the final day, as they did when chasing City in 2018/19.

Liverpool will be hoping that, at the ninth time of asking, they can be the first team to come from behind the leaders on the final day to be crowned champions.

The battle for Europe

Tottenham Hotspur and Arsenal are vying for the fourth and last spot in the UEFA Champions League next season.

Spurs are in the box seat and Antonio Conte knows that his team avoiding defeat at relegated Norwich City will effectively earn them a fourth-placed finish.

Mikel Arteta's men will face an Everton side who secured their Premier League status on Thursday.

Arsenal need to beat Everton and receive a favour from Norwich, who could still lift themselves from the bottom with a win.

A place in the UEFA Europa League (UEL) or UEFA Europa Conference League (UECL) is up for grabs for Manchester United and West Ham United.

Man Utd are sixth and in the UEL spot, but their goal difference is inferior to West Ham's, meaning that at Crystal Palace they must at least match the Hammers' result at Brighton & Hove Albion to avoid dropping to seventh and qualification into the UEFA Europa Conference League.

The battle to avoid relegation is now down to two clubs.

Burnley's 1-1 draw at Villa on Thursday took them above Leeds United and out of the bottom three.

It means that in their home match with Newcastle United on Sunday, Mike Jackson's side need only match the result of Leeds' trip to Brentford to earn themselves a seventh consecutive season in the Premier League.

Leeds need to better whatever Burnley are doing, otherwise they will head back to the Championship after two campaigns in the top flight.

As well as the team prizes, there are a number of individual honours up for grabs on Sunday as the winners for the Golden Boot, Golden Glove and Playmaker of the Season awards are decided.

Mohamed Salah's 22 goals leave him one clear of Son Heung-min in the race to win the Golden Boot.

Liverpool goalkeeper Alisson is tied on 20 clean sheets with his Brazilian compatriot Ederson as they look to claim the Golden Glove.

See: All to play for in Golden awards

Salah is also leading the way for the Playmaker of the Season award with 13 assists and could emulate Harry Kane to claim the two Golden awards in the same season.

One assist behind Salah is team-mate Trent Alexander-Arnold while Jarrod Bowen, Mason Mount and Andy Robertson all have an outside chance with 10.