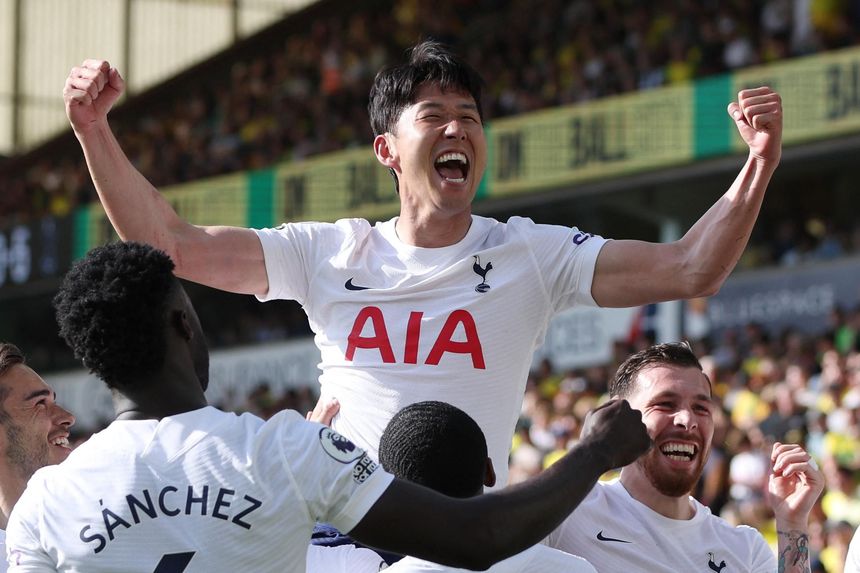 More than 484,000 Fantasy Premier League managers were rewarded after transferring in Son Heung-min (£11.2m) for Gameweek 38.

The South Korean ended the season with a flourish, scoring twice and returning 12 points in Tottenham Hotspur's 5-0 win at Norwich City.

It was Son's 11th double-figure haul this term, the most of any FPL player.

Indeed it was Son's best campaign to date as he totalled 258 points, the 12th-biggest season score since Fantasy was launched in 2002. No player has ever amassed more points and not finished top of the player standings.

The second-most bought player ahead of the deadline, Bowen belied his price tag to become the best-value midfielder in FPL, returning 29.9 points per million spent.

The Belgian extended his marvellous home record in 2021/22 with an assist in Manchester City's dramatic 3-2 win over Aston Villa. His six-point return means he has mustered 101 points across his last 11 matches at the Etihad Stadium.

Son was the popular captain choice among the leading 100 managers in Fantasy as 77 of this elite group, including newly-crowned FPL Champion Jamie Pigott, handed him the armband.

Kane scored and provided an assist as he claimed 10 points at Carrow Road, the 60th double-digit haul of his career.

The striker garnered 192 points to finish as the No 1 forward in Fantasy for the second successive year.

It is Kane's sixth appearance in the end-of-season Dream Team, matching the total of John Terry. Only Frank Lampard, who appeared seven times between 2002 and 2009, has featured on more occasions.

However, arguably the greatest name in Fantasy is Mohamed Salah (£13.1m).

Such consistency made him the default captain, the top choice in 35 of the 38 Gameweeks.

Salah scored his 23rd goal of the season in Liverpool's 3-1 win over Wolverhampton Wanderers to share the Golden Boot award with Son.

His final tally of 265 points means he has topped the player standings in three of the last five years.

Salah was also the most-sold player for the final round of fixtures as injury put his participation at Anfield in doubt.

Named among the substitutes, it was the first time he had produced an attacking return after coming off the bench this season.

And Philippe Coutinho (£7.1m) made 279,000+ managers rue their decision to sell him by ending a run of 10 successive blanks.

He put Aston Villa 2-0 up against Man City with 20 minutes remaining, only for Pep Guardiola's team to pull off a stunning comeback and win the Premier League title.