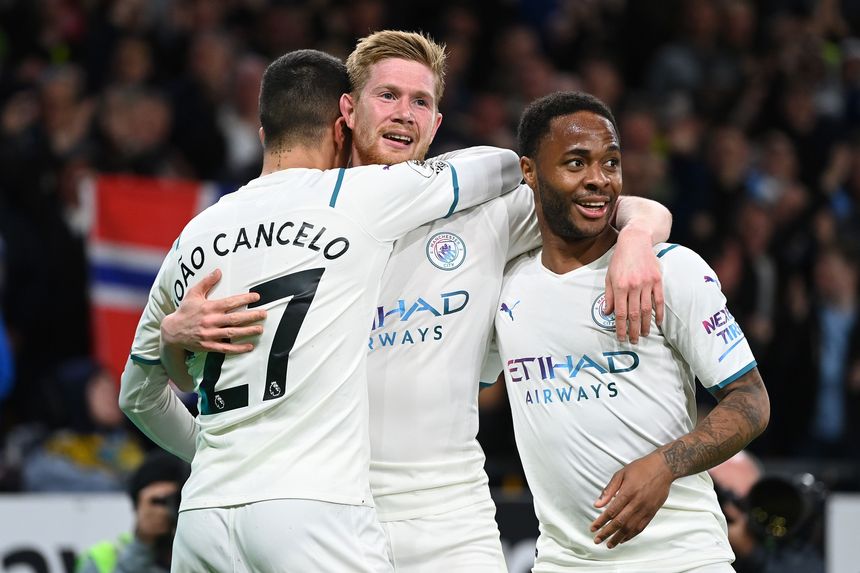 De Bruyne 'beyond perfect' says Guardiola External Link
Given: De Bruyne is the Premier League's best player
Owen: Man City have got the best in Haaland

Manchester City moved a huge step closer to back-to-back Premier League titles with a 5-1 victory over Wolverhampton Wanderers on Wednesday, a result that takes them three points clear of Liverpool with two matches left.

With just two matches remaining and City only needing four more points to guarantee top spot, they can move to the brink this weekend.

Jurgen Klopp's Reds are in FA Cup final action against Chelsea on Saturday, while 24 hours later, Guardiola takes his side to seventh-placed West Ham United.

City edged past the Hammers 2-1 when the teams met in the reverse fixture, and another triumph would leave them with one hand on the trophy.

The main concern for the leaders is they lost yet another defender to injury on Wednesday. With Fernandinho already filling in at the back against Wolves, Aymeric Laporte limped off with a knee problem, joining Ruben Dias, John Stones and Kyle Walker in the treatment room.

Liverpool resume their Premier League programme at Southampton on Tuesday, 17 May, in a match they may have to win to prevent City being crowned champions that night.

Chelsea tightened their grip on third spot and a place in next season's UEFA Champions League with a 3-0 win at Leeds United.

After Mason Mount's early opener, Leeds were reduced to 10 men on 24 minutes as Daniel James received a straight red card for a challenge on Mateo Kovacic.

Chelsea doubled their advantage 10 minutes after the break through Christian Pulisic, and Romelu Lukaku then fired in for his third goal in two matches.

If fifth-placed Tottenham Hotspur fail to beat fourth-placed Arsenal in Thursday's crucial north London derby then Chelsea would be assured of a top-four finish.

And even if Spurs win the duel, Chelsea can finish the job themselves with a home win over Leicester City next Thursday, 19 May.

Leeds' third straight defeat leaves them inside the relegation zone with just two matches left, while their main rivals Burnley and Everton both have a match in hand.

Everton moved two points clear of danger with a 0-0 draw at relegated Watford.

If Leeds drop points at home against Brighton & Hove Albion on Sunday, Everton could secure safety later that day with a home win over Brentford.

Leeds will seek to overtake a Burnley side who have a tough trip to Tottenham Hotspur.