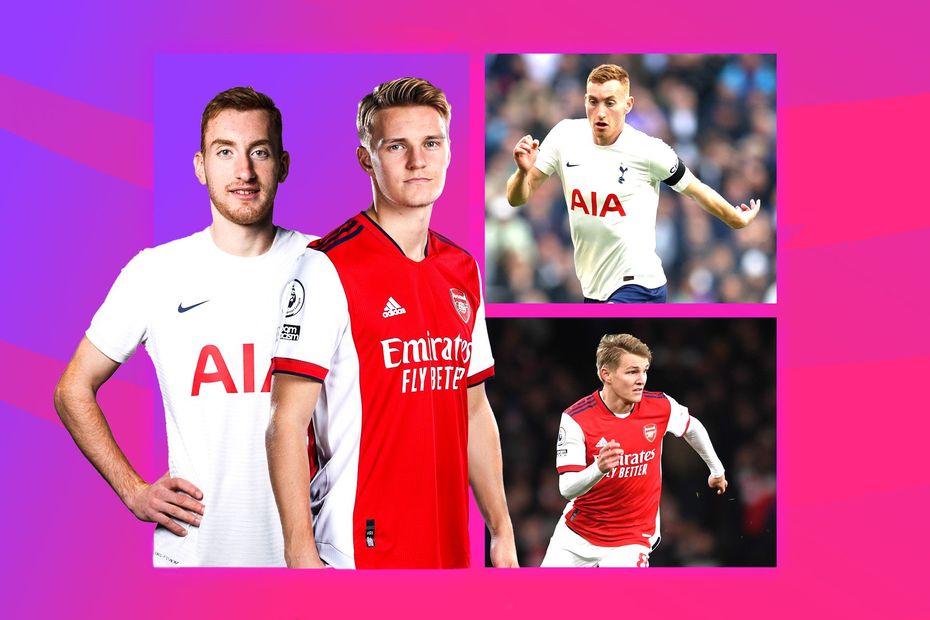 Arteta on Tottenham, the top four and transfers External Link

Two of the Premier League’s hardest-working creators could hold the key to Thursday’s colossal north London derby between Tottenham Hotspur and Arsenal.

Martin Odegaard has tasted success in each of his two appearances against Spurs, playing a pivotal role in back-to-back Emirates Stadium wins.

His industry, willingness to press and ability to find space in congested areas will be crucial as the Gunners seek a win that would guarantee a top-four finish.

January loan signing Dejan Kulusevski could be equally influential for Spurs on his debut appearance in the fixture.

In just 15 outings, and 12 starts, the Swede has made eight assists while also scoring three times.

Kulusevski's selfless running and quality end product has been key for Antonio Conte’s side during their push for UEFA Champions League qualification.

Odegaard might not have grabbed as many headlines this season as Bukayo Saka, who is a doubt, or Emile Smith Rowe but he has been just as impressive.

Flitting between the lines enthusiastically and displaying a lot more confidence on the ball than he did during last season’s loan spell, the Norwegian has been a valuable creative hub.

Indeed, the only two Premier League stars to have made more key passes in open play are Bruno Fernandes and Mohamed Salah.

Out of possession Odegaard is regularly pushed forward to trigger a press, but he is equally capable of dropping in to become a third member of a central-midfield unit. This may be needed at times to fashion overloads on Thursday.

Throughout September’s 3-1 home win over Spurs, their neighbours were unable to get a handle on Odegaard’s slippery movement.

Floating behind their two central midfielders, potentially drawing a centre-back out of position, he could be a thorn in their side once again.

The 23-year-old’s telepathic relationship with Saka is something Spurs must try to contain too.

Drifting right to link up with him, Odegaard has supplied the England international with 18 key passes this term.

Together they will look to play around Ryan Sessegnon and Ben Davies at the Tottenham Hotspur Stadium.

Conte must be thrilled with Kulusevski’s outstanding end product since arriving on loan from Juventus in January.

The 22-year-old has found space expertly down Spurs' right side and been a cool customer at key moments.

Of his eight assists, five have been supplied to Son Heung-min, so Arsenal must be wary of that connection.

This season, only Salah and Riyad Mahrez have contributed goals or assists at a faster rate than Kulusevski, who averages one every 101.4 minutes.

In their bid to keep him quiet, Arsenal have a selection dilemma at left-back.

Right-sided defender Takehiro Tomiyasu filled the gap last weekend, but the Gunners may want their strongest full-back looking after in-form Son on the opposite flank.

This could leave understudies Nuno Tavares or Cedric Soares as the most likely options, and Spurs may identify that as an area of weakness.

An alternative option is for Mikel Arteta to switch to a back three for extra defensive security.

Spurs recently struggled to break down Brighton & Hove Albion and Brentford in that shape, so we could see a unit of Ben White (if he is fit enough to play), Rob Holding and Gabriel flanked by Saka and Tomiyasu in the wing-back positions.

*Minimum 10 goal involvements (stats from 10 May)

One of the standout strengths Odegaard and Kulusevksi share is a tireless work ethic.

In a match of this magnitude, one that is likely to be played at a frenetic pace, both managers will need to know they can rely on their players, and they both fit the bill.

Despite being super-creative they each top their respective club's rankings for the average distance covered per 90 minutes.

Both men want to close down defenders, with Kulusevski ranked fifth for all attacking midfielders when it comes to pressures per 90. Odegaard is placed a respectable 16th in that category.

On and off the ball, Odegaard and Kulusevski have made themselves invaluable players.

If either brings their A-game to the table on Thursday evening they could be the matchwinner.