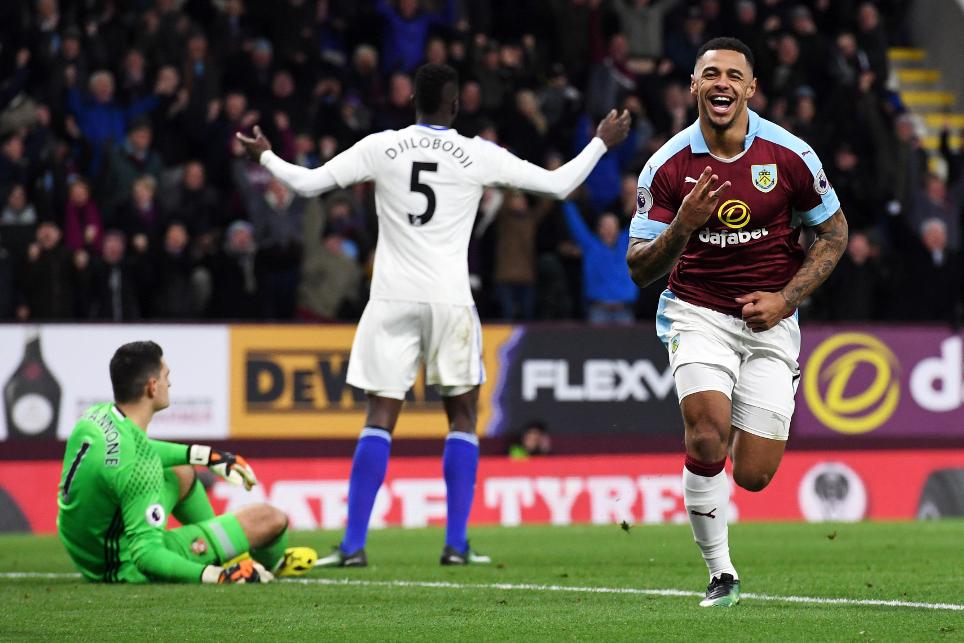 The Scout assesses the bonus-point benefactors at this stage in Gameweek 19, as Burnley’s hat-trick hero Andre Gray claims top billing

A Bonus Points System (BPS) tally of 78 was the highest on show in Gameweek 19 thus far, as Gray fired a hat-trick against the Black Cats.

Team-mate Ashley Barnes (£4.4m) picked up two bonus points with an assist and a second-half spot-kick earning him 39 in the BPS. Sunderland’s Jermain Defoe (£7.7m) was awarded the remaining point, tallying 29 in the BPS courtesy of his consolation for the visitors.

Willian’s (£7.1m) brace of goals helped him to a BPS score of 43, second only to Burnley’s Gray in the Gameweek.

The playmaker’s BPS total of 35 edged out Stoke City’s Peter Crouch (£4.7m) on 32, with the Potters’ striker supplying a goal and an assist in his second successive start.

Diego Costa (£10.7m) just missed out on bonus points, earning 29 in the BPS having missed the target with three efforts while losing possession to three tackles.

That edged out team-mates Marc Albrighton (£5.0m) and Kasper Schmeichel (£4.9m), who were both tied on 29 BPS and earned two bonus points apiece.

Albrighton provided the assist for Slimani’s goal, while Schmeichel made five saves and 11 recoveries as Leicester City kept their first clean sheet since Gameweek 7.

Registering 36 in the BPS, the summer signing netted the winning goal, supplementing this with four key passes and five completed dribbles in Saturday’s contest.

Fellow goalscorer Anthony Martial (£9.3m) picked up two bonus points with a first goal since Gameweek 7. A BPS tally of 32 was dented somewhat as Martial was tackled on four occasions.

Goalkeeper Victor Valdes (£4.5m) claimed a single bonus point for the visitors, having made 10 saves – more than any other stopper in Gameweek 19.

He shared a BPS tally of 30 with United’s Daley Blind (£5.3m), who also received one bonus point.

Having been replaced on 63 minutes, prior to Middlesbrough’s goal, Blind benefited from a clean sheet.

The Baggies’ Matt Phillips (£5.6m) took his tally to 11 bonus points in the last nine Gameweeks with the maximum three at St Mary’s Stadium.

His goal and assist returns scored 43 in the BPS, with team-mate Hal Robson-Kanu (£5.0m) awarded two bonus points, having scored on his first Premier League start.

Shane Long (£6.1m) notched Southampton’s only goal and picked up a single bonus point with a score 29 in the BPS.

Charlie Daniels (£5.1m) received the three bonus points after producing an assist and a clean sheet in the Cherries’ away victory.

The left-back registered 35 in the BPS as the visitors claimed 10 of the top 11 ranks.

He earned 32 in the BPS, winning two tackles and completing 89% of 65 passes.

The centre-back made eight clearances, blocks and interceptions (CBI) and won a pair of tackles.

Georginio Wijnaldum’s (£7.5m) decisive goal was enough for the Dutchman to pick up the three bonus points with a BPS score of 36.

The Liverpool goalkeeper tallied 26 in the BPS, a total shared with Manchester City’s Pablo Zabaleta (£4.7m).

Mignolet made two saves and nine recoveries on his way to a third clean sheet in four Gameweek starts.

Despite conceding, Zabaleta benefited from a single bonus point, having made 12 CBI and five successful tackles in City’s defeat.

Adam Lallana (£7.6m) missed out on bonus rewards despite contributing the assist for the winning goal.

His BPS score of 15 suffered as the midfielder was caught offside twice, committed three fouls and was tackled on four occasions.