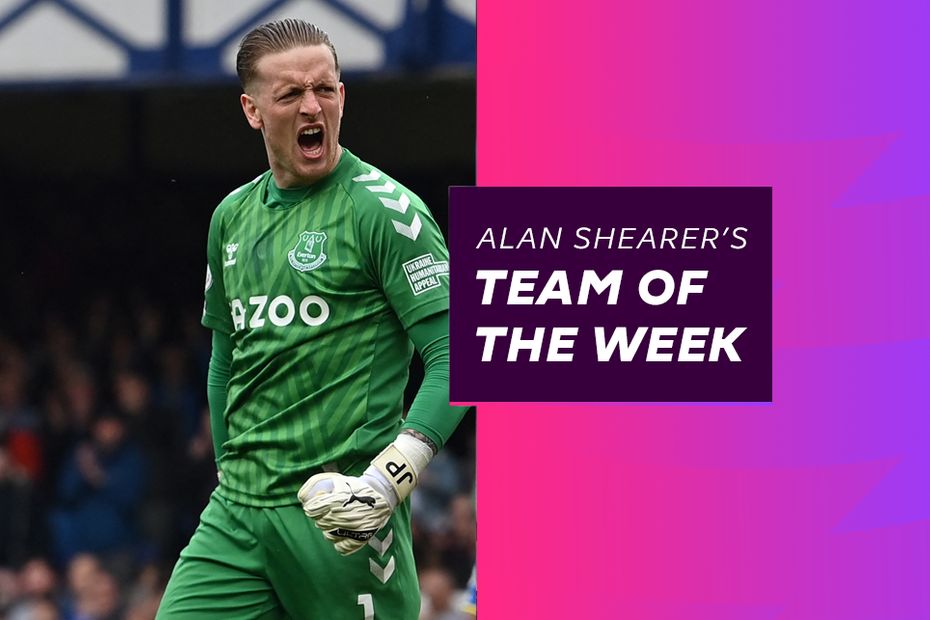 Few gave relegation-embattled Everton much hope of beating Chelsea on Sunday, but they earned three crucial points in the fight to stay up thanks to a 1-0 win over the third-placed Londoners.

That win came in no small part thanks to a goalkeeping performance by Jordan Pickford that Premier League Hall of Fame inductee Alan Shearer describes as "extraordinary".

Pickford made five key interventions to keep out Thomas Tuchel's side, including a stop that Shearer says might be "the save of the season."

Jordan Pickford (EVE)
"A hero in goal. Extraordinary. Made a string of stunning stops to secure the vital win over Chelsea, including a contender for save of the season."

Joao Cancelo (MCI)
"Gave another tireless performance at both ends of the pitch as Manchester City maintained their title push with a convincing 4-0 victory."

Rob Holding (ARS)
"His first Premier League goal, and how important it proved. Arsenal are starting to get goals from all around the team."

Marc Cucurella (BHA)
"He is such a great signing by Graham Potter. A clean sheet and another solid display."

Jack Cork (BUR)
"Without a goal for over three years, what a time to pick to break into the box and score the crucial equaliser."

Naby Keita (LIV)
"Popped up with the all-important winner to justify his selection as Jurgen Klopp rotated his team."

Milner’s brilliant challenge, excellent build-up play and Naby keeping his cool to put us ahead 🧊 pic.twitter.com/dulbR8n3Hu

Demarai Gray (EVE)
"A menace throughout and was unlucky not to add a goal to his assist."

Danny Ings (AVL)
"Made an instant impact from the bench, setting up the equaliser, hitting the post and then scoring Villa's second."

Son Heung-min (TOT)
"Unplayable. Directly involved in all three goals, scoring with two brilliant strikes. He has Mohamed Salah looking over his shoulder in the Golden Boot race."

Manager: Mikel Arteta (ARS)
"Arsenal needed to win ugly and, under pressure in the top-four race against a deep-lying West Ham side, they managed to do just that."