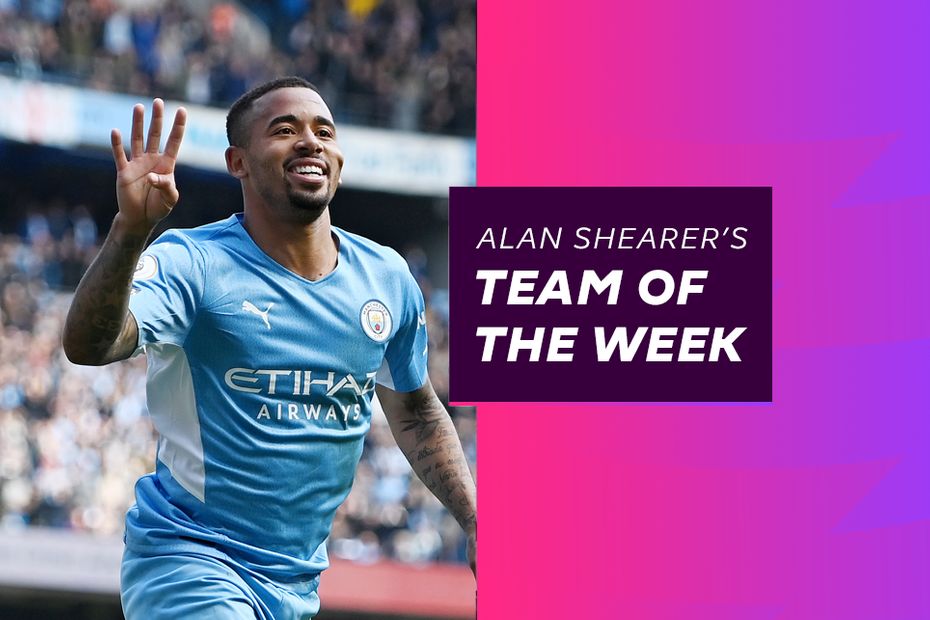 Four goals for a Manchester City side looking to stay one step ahead of Liverpool in the title race made Gabriel Jesus impossible for Alan Shearer to ignore when the Premier League's all-time top scorer was selecting his best XI of Matchweek 34.

Jesus's first Premier League hat-trick in the 5-1 win against Watford earned him a place alongside team-mate Kevin De Bruyne in the Team of the Week chosen by Shearer, the inaugural Hall of Fame inductee.

💫 @alanshearer's Team of the Week is here 💫

What do you make of his picks? pic.twitter.com/eHpqENJU6h

Lukasz Fabianski (WHU)
"Made plenty of good saves in the 1-0 defeat at Chelsea and didn’t deserve to lose."

James Tarkowski (BUR)
"Gave nothing away in defence and helped Burnley to another big three points against Wolves."

Pontus Jansson (BRE)
"Again there were no shots on target for Spurs and he can take a lot of credit for that."

Andy Robertson (LIV)
"Got to be a Player of the Season contender. He won the game for Liverpool."

Bruno Guimaraes (NEW)
"He is proving to be a wonderful signing for Newcastle and produced another very clever, well-taken goal."

Kevin De Bruyne (MCI)
"What can you say that hasn't been said already? He has an outrageous crossing and passing ability."

Bukayo Saka (ARS)
"Scored another goal and was too hot to handle, giving Man Utd a very tough afternoon."

Gabriel Jesus (MCI)
"His first Premier League hat-trick, and four goals in all - he had to be in the team."

Manager: Eddie Howe (NEW)
"Oversaw a huge win that sent Newcastle into the top half."