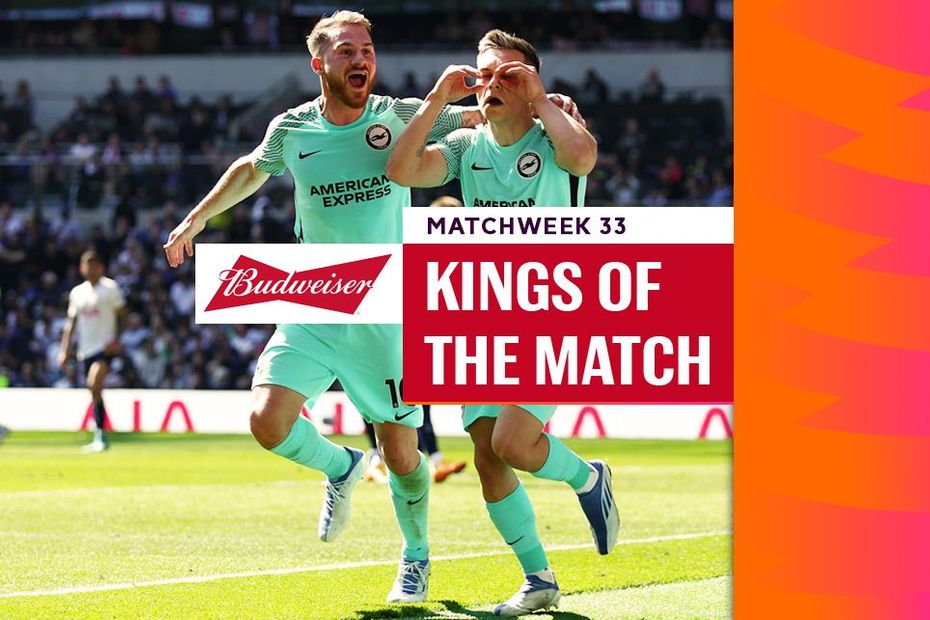 See which players have earned the backing of supporters, including Brighton's Leandro Trossard

Hargreaves: Trossard's class made the difference

After the final whistles in Matchweek 33 of 2021/22, thousands of supporters have voted to crown their Budweiser Kings of the Match.

See who has come out on top in the matches played so far, and click on the results below to find out how the voting went.

The Brighton & Hove Albion star struck late on to give his side a second successive win in north London, following their victory at Arsenal the previous weekend.

He earned a huge 90.8 per cent of the vote after netting his 50th club career hat-trick.

The goalkeeper made several excellent saves to keep Arsenal at bay and help Southampton to a first win in six matches.

His towering header in stoppage-time secured all three points at Vicarage Road, giving Brentford a third victory in a row. Jansson narrowly pipped Christian Eriksen to the award.

The Brazilian scored both goals as Newcastle United came from behind to win a fifth straight home match. He took almost 80 per cent of the vote.

The striker headed in his second Premier League goal as Burnley picked up a point in the relegation fight.

Salah scored two goals and assisted another as Liverpool went top of the Premier League. He claimed almost 80 per cent of the vote.

The Arsenal forward earned and scored a late penalty in their win at Stamford Bridge.

The Leicester City midfielder was the heartbeat of his side and had an 86.1% pass completion rate at Goodison Park.

The Newcastle defender made four successful tackles as he helped his side to keep a clean sheet against Crystal Palace.

Mahrez scored Manchester City's first goal - his 11th in the Premier League this season - in the win over Brighton and Hove Albion.