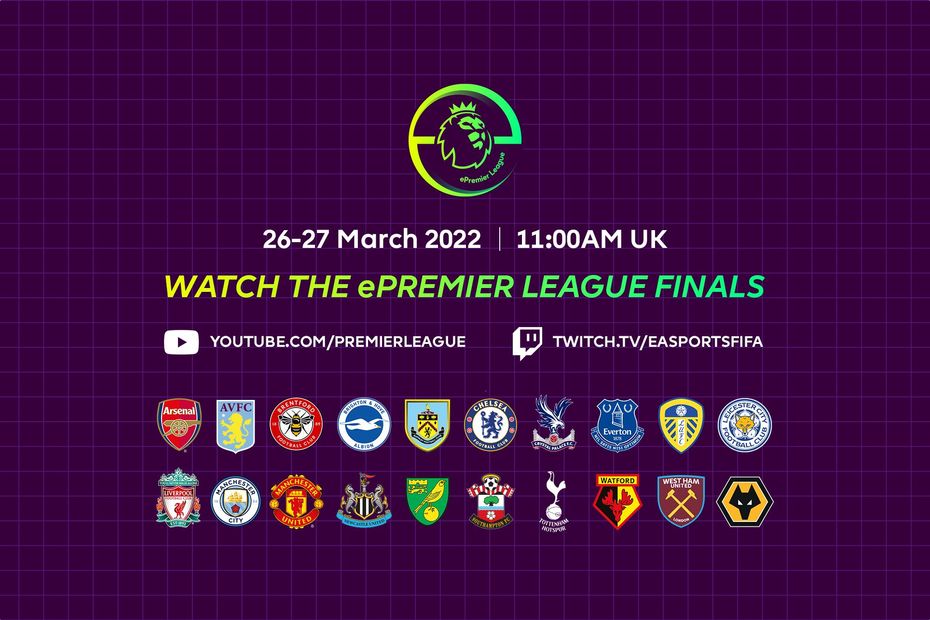 The ePremier League 2021/2022 Grand Finals take place on Saturday 26 and Sunday 27 March, with some of the world’s best EA SPORTS™ FIFA 22 players competing to win the title for their club.

Now into its fourth year, this season's tournament sees the prize pool increased to £100,000, with three seats on offer for top-ranking players at the EA SPORTS™ FIFA 22 Global Series Playoffs.

Due to the COVID-19 pandemic, this year’s ePremier League Grand Finals are the first featuring all finalists at a live venue since the 2018/2019 season, with players competing at Here East in London’s Queen Elizabeth Olympic Park.

Who will be crowned champion on 27 March?

Once again, the finals will be televised live in the UK by Sky Sports Premier League, with tournament action also shown across Premier League channels (YouTube, web, app, Twitter and Facebook) and on EA's Twitch channel.

It will also be on the Sky Sports YouTube channel and made available to viewers around the world by the League's international broadcast licensees.

All 20 Premier League clubs hosted thrilling Club Playoffs earlier in the year, with 40 players, two per club, progressing to the Grand Finals.

This year's finalists include the 2019/2020 winner, Thomas Leese, representing Tottenham Hotspur, and inaugural champion Donovan 'Tekkz' Hunt, who will be playing on behalf of Liverpool for the fourth time.

"Nobody has ever won the tournament more than once so it would be unreal for me to be the first person to do it."

Former ePremier League champion Leese said: "I'm excited to be competing again this year and I'm really looking forward to getting the chance to regain my ePremier league title. The level of players has gone up a notch, so I know that it's going to be a difficult task.

"It's an honour to represent Tottenham and I'd love to win the ePremier League title for them. Nobody has ever won the tournament more than once so it would be unreal for me to be the first person to do it. I'm looking forward to the Grand Finals, particularly as it's the first in-person event for over two years."

This year's Grand Finals sees a change to the tournament format.

Players will work collaboratively as a team by taking part in a series of 1v1 matches against pairings from other clubs, with one player competing per console, in a two-legged tie.

Clubs are split into four groups for Saturday's matches, with the top two in each group progressing to Sunday’s knockout stages. The two victorious players in the overall final will win the honour of ePremier League champion for their club.

Inaugural ePremier League winner, Donovan "Tekkz" Hunt, said: "I'm a huge Liverpool fan, so to represent the club for the fourth year in a row means a lot.

How do you become a master of @EASPORTSFIFA's #FIFA22?

"The new team-based format of the Grand Finals is really exciting and means that I'll need to work closely with my partner, Diogo, if we're to win. I'm looking forward to getting going!"

The competition will be the first ePremier League to be played on next-generation consoles, Playstation ®5 and Xbox Series X|S. The group stages will be taking place on 26 March, with the quarter-finals, semi-finals and final on 27 March.

Last season's ePremier League runner-up Olle 'Ollelito' Arbin is once again through to the Grand Finals, representing Leeds United for the second time.

"I have no doubt there will be plenty of drama over the course of the weekend."

Premier League Chief Commercial Officer Will Brass said: "We are delighted to be hosting the ePremier League Grand Finals as a live event once again, with all the finalists competing in the same arena. This will add to the excitement for those competing as well as people watching from home.

"We have some of the world's best players taking part, alongside newcomers who will be keen to make their mark on the biggest stage. The new team-based format introduced for this year’s finals will add a completely different dynamic, putting a greater emphasis on the club versus the individual.

"As with previous finals, I have no doubt there will be plenty of drama over the course of the weekend and I look forward to seeing which two players can lift the ePremier League trophy for their club."

Get to know your club's #ePremierLeague finalists a little better 😉 pic.twitter.com/7HvAQeh59s

"The longevity of EA and Premier League’s partnership will continue to accelerate EA SPORTS FIFA’s growth and strengthen the love for the sport worldwide."