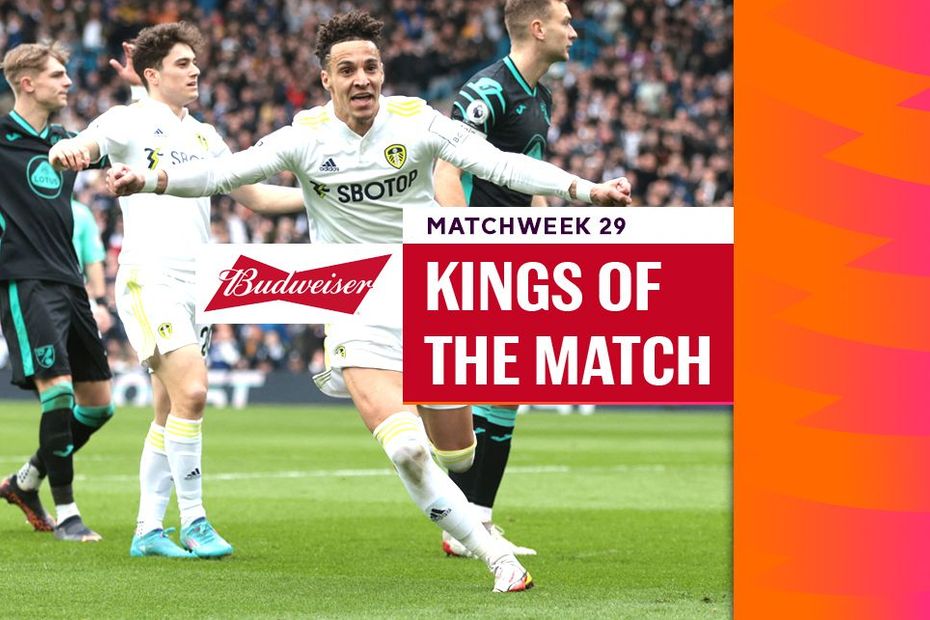 See which players have earned the backing of supporters, including Leeds United's Rodrigo

After the final whistles in Matchweek 29 of 2021/22, thousands of supporters have voted to crown their Budweiser Kings of the Match.

His 20th Premier League goal of the season meant Liverpool became the second team to net 2,000 in the competition after Manchester United.

The in-form Brentford striker struck two late goals to earn his side back-to-back Premier League victories for the first time.

Scored a brilliant hat-trick as Man Utd held off Tottenham Hotspur to move back into the top four.

Another impressive display in defence, he helped Chelsea record a third clean sheet in five matches.

The Wolverhampton Wanderers captain led by example, heading in the decisive goal at Goodison Park.

The Spaniard took the vote ahead of team-mates Raphinha and Joe Gelhardt, as Leeds United won for the first time in nine matches.

His first-half brace gave Watford a vital three points in their fight for safety.

A threat throughout, his two assists helped West Ham United to victory and kept up their push for a top-four finish.

Kept his 12th clean sheet of the campaign with several excellent saves, including one superb stop from Harvey Barnes.

Hit the woodwork in the first half and went on to help Manchester City record a fourth clean sheet in six matches.

The striker scored his 95th away goal in the Premier League to become the highest scorer on the road in the competition's history.

The Liverpool left-back helped his side keep a clean sheet and provided the assist for their second goal as they recorded a ninth successive league win.

Earned just under two-thirds of the total vote after netting the vital late winner for Everton.