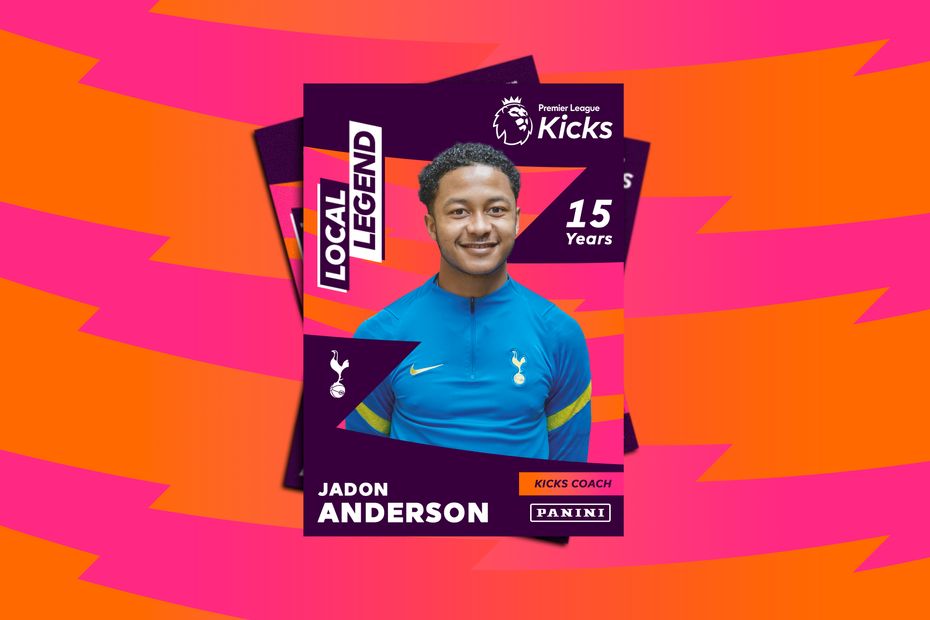 For many young people in Premier League Kicks, taking part in the programme gives them a pathway into coaching which allows them to be an inspiration to others.

One of those coaches is 21-year-old Jadon Anderson, who has progressed from participant to coach during his seven years with the Tottenham Hotspur Foundation.

"It has helped me become the person I am today," he says.

"I'm just giving back to the local community, because that's the main thing, getting young people off the streets and having fun."

To date, Jadon has run 400 PL Kicks sessions and volunteered over 300 hours, making a huge positive impact on the community.

As part of the 15-year anniversary celebrations of PL Kicks, Jadon was named as Tottenham Hotspur's "Local Legend" to mark his transition into a role model for other young people in north London.

He was presented with his own Panini card by Spurs ambassador and former captain Ledley King at one of the club's PL Kicks sites at Ferry Lane, while he also was sent a congratulatory message on behalf of the first-team squad from midfielder Pierre-Emile Hojbjerg.

"I have loved the journey from a participant all the way through to now being a coach and I look forward to running more sessions with many more incredible young people," says Jadon.

"So, getting an award for it is amazing and I feel good for it, and I hope that my mum is proud of it as well!"

Tottenham Hotspur Foundation began its PL Kicks delivery in the 2006/07 season as one of four initial pilot clubs, with their Ferry Lane base being the home of the first programme session.

"Kicks has had an incredibly positive impact over the past 15 years and it was great to go down to Ferry Lane - I remember being there when it all started," King recalls.

"It's so important we recognise and celebrate the achievements of people like Jadon, who have helped make Kicks what it is today."